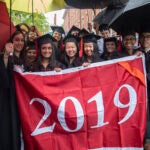 Harvard photographers select their pics of the year

Throughout the year, the Gazette’s staff photographers take thousands of photos. They selected their favorites from 2019 and discussed why they left such an impact.

Taking on two doctoral programs — while pregnant with twins

Talia Gillis was so lovely and agreed to be photographed at nine months pregnant … with twins. She was also juggling two doctoral programs and a toddler. The plan was to publish before the babies were born, but things happened fast and we were invited over to meet her husband and see these beautiful newborns.

She received a lot of heartwarming notes from other Harvard moms — the support network at Harvard is amazing. I was happy to be able to share this story with our audience. Hoping to follow up!

Harvard University Police Officer Charles “Chuck” Marren met with first-year student Crystal Wang 15 years after he was photographed holding her during her first visit to Harvard when she was a toddler. We orchestrated a reunion and it was such a touching moment; Crystal was so thoughtful, bringing a copy of the original photo from 2004 and a handwritten letter, and Chuck was visibly moved. We started with a portrait of the two together just as they had been 15 years before, and then Crystal hopped onto Chuck’s Harley Davidson, and this sweet lighthearted moment transpired.

A study in studying

In Harvard Yard, Ben Zeisberg ’23 studies near Holworthy Hall. I enjoy finding situations where formal visual elements are a tribute to the themes and subjects found in the tradition of modern art. Here, I saw sharp autumn light stretching across a rainbow of Common Spaces chairs while looming trees cast deep shadows. As the student concentrates on his research, a dog pulls away from his leash in the background.

I photographed Crimson track star Gabby Thomas for one of the Gazette’s senior Commencement profiles last spring. The previous year Thomas had become the first NCAA sprint champion in Ivy League history, setting a new national collegiate record in the 200 meters. She forsook her senior year of eligibility to turn professional, signing a contract with New Balance.

I initially thought I might photograph Gabby at the outdoor track at dusk, so I could get her with a setting sun. But the weather was cold, with light rain falling, so we moved indoors. I noticed a large “H” and the words “Harvard Track and Field” on the back wall and decided that would be my background. Ideally, I would capture her running between the two, so they both would be visible I also knew I wanted to shoot her at a slow shutter speed, combined with the studio flash, to produce an effect known as “ghosting.”

I warned Gabby this process was a lot of repetition, with several criteria necessary to get the photo I wanted. Finally, after at least 30 takes, and with Gabby getting a full workout, we had our picture. It was definitely a team effort!

Transgender swimmer Schuyler Bailar ’19 came to Harvard recruited for the women’s team and became a member of the men’s team. He’s a fierce advocate for transgender people and rights. We worked together to get this powerful image of him. I’m proud to be part of his cause in this small way.

Every year, we watch the Nobel Prize week for any winners with a connection to Harvard, and first thing Monday at 5:30 a.m., William G. Kaelin Jr., the Sidney Farber Professor of Medicine at Dana-Farber Cancer Institute, was announced as one of three winners of the 2019 Nobel Prize in physiology or medicine. As soon as I heard his name, I raced to Kaelin’s home in Boston and photographed him. After I took his portrait, he began fielding calls from the media and stepped into his living room. I enjoyed this solitary moment, with the lights not yet turned on, and his form silhouetted in the morning light. This image, as he quietly processes the gravity of the moment, stands in contrast to his experience just a few hours later, when he would be speaking from a podium surrounded by the press and lauded by his peers.

I first visited Harvard when I was 13, and I was fascinated by the chess players who gathered in the heart of Harvard Square. When I later came to the area for college, I used to sit and play, enjoying the stories of the players from all over the world. Now I find myself racing by the tables between assignments, but every once in a while I am able to stop and watch the matches. During a Community Chess Weekend at the Smith Campus Center, this frame captured Ridvan Sakir, who finished third in the competition, in deep concentration.

Harvard first-years participate in the 2019 Annual Day of Service

This photo is of first-year students participating in a Day of Service at Winship Elementary School in Brighton, painting a rainbow in the girls’ bathroom. I shot multiple frames of this scene, most from the side with students’ faces visible, but gravitated toward the back, wanting to include all the different-colored paint cans in my frame. The different colors of paint, as well as the diversity of the students, reinforce the theme of inclusivity that the rainbow represents.

Frames of mind:  A window onto Harvard’s campus

Frosted squares on Pound Hall windows accent fall foliage at Harvard Law School. I am interested in photographing spontaneously to create a dialogue with other artistic media, such as pop art. I hope that my photographs can ask questions that give the viewer a chance to see the world differently. The meaning of a photograph is also affected by being showcased with other images. For example, the dozens of gray squares in this photo contrast with the array of rainbow flags in the next image.

The Harvard T.H. Chan School of Public Health pays tribute to diversity inside Building 2 by displaying the bisexual flag (from left), the pride flag, and the transgender flag — all with a description of their artistic origins. With my camera, I try to explore layers of visual and cultural meaning to make photographs that foster social and environmental change. Here, I saw a researcher passing between translucent flags while ascending a staircase back to his laboratory.

An ode to autumn as cold weather descends

I had been photographing in the Yard trying to wrap up a photo gallery about fall on campus. I noticed the multi-colored chairs clustered together, almost conjuring a group having an intimate conversation. The fallen red and yellow leaves littering the entire scene seemed like confetti marking the end of a party. I wanted a human figure to complete the feeling of people leaving the chairs behind, and as luck would have it, a stroller with an umbrella walked past, and I had my shot.