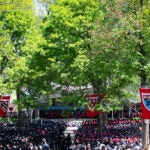 Gabby Thomas almost gave up on Harvard before her college career had really begun. Balancing grueling track workouts with a demanding science-heavy class schedule pushed her to the brink freshman year. Then, she did the thing people needing advice do every day: she called her mom.

“She just said ‘you’ll be OK, you’ll be fine,’” recalled Thomas of the conversation with her mother, Jennifer Randall, a statistics professor at UMass Amherst, who told her daughter she should give it time. So, Thomas stayed, dived into her studies, and made NCAA history.

Today the 5’11’’ sprinter and Atlanta native knows she made the right choice.

“Here I am. I am more than fine,” said Thomas, a neurobiology concentrator and a standout track athlete for the Crimson who signed a contract with athletic shoemaker New Balance in October, foregoing her last year of collegiate eligibility to race against the elite in her sport. Currently an assistant coach as she completes her senior year, Thomas still trains with the team, traveling to meets and occasionally running in the professional races that are held alongside collegiate events. She supports the Crimson runners however she can, offering up everything from emotional encouragement to tips on relay handoffs. “Honestly, it’s a lot of fun. I enjoy being there for them in any way that they need it,” she said.

“I’ve just had such an amazing experience here,” Thomas said of her Harvard time. “Everything has just gone so well for me, and I am so grateful for every opportunity that I’ve had.”

“Gone well” is one way to describe it; others might call it exceptional. During her University career Thomas managed to compete in Olympic qualifying trials in 2016. She also logged multiple personal, Harvard, and Ivy League bests, setting the School and Ivy League records in the outdoor 100-meter and 200-meter dash and the indoor 60-meter dash, and becoming the Ivy League Most Outstanding Track Performer at the league’s outdoor and indoor track and field championships in 2017 and 2018. And she excelled at the triple jump, long jump, and the 4×100- and 4×400-meter relays.

But her biggest title, the one that got her seriously thinking about turning pro, came last year at the NCAA Indoor Championships in College Station, Texas. Fresh from a Harvard study abroad summer program in Senegal, Thomas was eager to run. “I was ready to be at Harvard again,” she said. “I was ready to compete with track and I think that really showed.”

She smiles as she recalls her record-breaking 200-meter dash at the national meet last March. An earlier runner had posted a blistering time, meaning Thomas would have to tie the then-NCAA record of 22:40 to win. “All I could do was focus on what I could do in the moment: run as fast as I could and try to win the heat,” she said. “When I saw it was a collegiate record, I couldn’t believe it.” Others appeared just as stunned by her time of 22:38, a personal and NCAA best.

She credits her sprint coach and her fellow track athletes with helping her excel at Harvard.

“My teammates have inspired me so much since freshman year. Watching senior … Autumne Franklin and junior Jade Miller work so hard really shaped me as an athlete,” said Thomas of the standout sprinters. Now as a leader on the team, the Harvard athletes she watches over continue to motivate her to push herself, she said, “to be a good example.”

In her youth, soccer was Thomas’ top sport, but when her high school required that she pick a spring activity, her mother insisted on track. When it came to her studies, Thomas had a “knack for science,” and initially envisioned a career spent researching autism. “It’s close to family, very personal,” she said of the developmental disorder affecting her younger brother.

But a Harvard first-year seminar and a summer internship helped point her in a different direction. Through the course came a fuller appreciation of the disadvantages facing African Americans in the nation’s health care system. Research at a local hospital helped her decide that she wasn’t cut out for a life in the lab. She added a secondary in global health and health policy to her concentration and plans to pursue a master’s in public health once she hangs up her running shoes. Eventually, she sees working in health care administration or public policy with a focus on health care disparities.

“My work at Harvard changed my perspective,” said Thomas.

Evelynn Hammonds, chair of the Department of the History of Science, Barbara Gutmann Rosenkrantz Professor of the History of Science, and professor of African and African American Studies, worked with Thomas on a global health and health policy independent study project. “I have always been impressed with Gabby’s passion for studying issues of race and health,” said Hammonds. “She always asked very thoughtful questions and clearly wants to look at issues such as health disparities with the aim toward finding solutions to these vexing problems.”

But classes and track weren’t the only things keeping Thomas busy. She also carved out time to serve as diversity director for Harvard Undergraduate Women in Business, join the Sab Club, and mentor Cambridge middle schoolers.

One of her immediate post-college goals is to train for the USA track and field outdoor championships in July. Top finishers qualify for the World Championships two months later. She is also aiming for the Tokyo Olympics in 2020. After that, it’s “really hard to say.”

“I never thought I would be going professional until less than a year ago. It just happened so quickly and it was a great opportunity, but I haven’t really thought about that at all. I think I am just going to take it day by day, year by year.”

“Looking back,” Thomas added, reflecting on her Harvard time. “I am very happy that I didn’t give up on being here.”