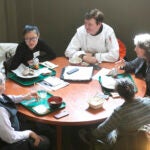 Talia Gillis has such a calm, friendly presence you’d never guess that she’s undertaking two doctoral programs while pregnant with twins and running around after a toddler at home.

“Did I underestimate the amount of work it would take?” she asked rhetorically. “Yes, probably. But it has been fantastic.”

Gillis recognizes that she’s an outlier. “It’s not very common for women to have kids in the economics graduate program, and two is odd, but three is kind of crazy,” she said in early February. “It took a long time to reconcile my self-concern as a graduate student and the fact that I was going to have twins, but a lot of people have been very supportive.”

Born in London, Gillis moved with her family to Australia when she was an infant, and then to Israel when she was around 8. It was at Israel’s Hebrew University that she first studied law and economics as an undergraduate, before moving to Oxford for a graduate law degree. She then came to Harvard six years ago to get an S.J.D. in law and economics, deciding soon after to add a Ph.D. in business economics with a focus on household finance and behavioral economics.

“With behavioral economics, it takes one to know one,” she explained with a laugh, adding that “introspection about how I was running my finances and spending money really had an initial appeal for going into behavioral economics and household finance.”

Gillis said that being in both programs helps her look at problems from multiple angles. For instance, she and some colleagues in the Economics Department recently started researching fairness in the use of AI in the credit market, and their studies eventually pointed to the fact that the laws around the topic are vague because such questions haven’t been dealt with in the past.

“Being affiliated with the Business School, the Economics Department, and the Law School is really fun,” she said, “because you get exposed to so many different ways of thinking about problems, and different disciplines. Overall, it’s such a fantastic place for all these topics I’m interested in. Behavioral economics is such a huge thing here at Harvard, so I’m very lucky in that respect.”

She does believe that academia should encourage more discussion around pregnancy and motherhood, so that other graduate students won’t feel like they are being taken less seriously if they decide not to put their family planning on hold during the program. “It’s important to talk about and recognize it,” she said, because it shouldn’t be “treated as irrelevant on the one hand,” but it also shouldn’t mean she and her career goals are taken less seriously.

At 34 weeks pregnant Gillis couldn’t help but occasionally think about the behavioral economics of pregnancy.

“The number one response I get from economists is that it’s efficient because you get two babies with one pregnancy,” she said of carrying twins. “But that’s primarily from people who have not been pregnant with twins.”

She noted that there’s always an element of irrationality in the decision to become a parent. “It involves both so much uncertainty about what will happen, but also, it’s one of those decisions that itself will change your preferences and what you care about,” she said.

It’s actually a question that economists have a hard time analyzing, because they “always take [personal] preferences as given,” Gillis said. “So, if you think about how would an economist think about making a decision, that itself changes your preferences, perhaps in unknown ways, that’s just mind-boggling.”

As for the future, she summed it up at the time as “short-term nervousness and long-term excitement,” not realizing just how short-term the nervousness would be. A few days after we talked to her, Gillis gave birth to healthy twins, a boy and a girl.

“The twins are keeping us busy, but we are all doing great,” she said a few weeks later. “Their early arrival was a reminder that kids have their own preferences and parents are not the only decision-makers!”