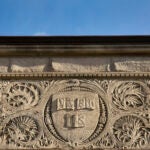 The Harvard historian who literally wrote the book on his beloved alma mater died peacefully on April 10 at his home in Lincoln, Mass. Richard McMasters Hunt, a faculty member in social studies for 42 years and University Marshal for two decades, was 93.

Born and raised in Pittsburgh, Hunt graduated from St. Paul’s School in Concord, N.H., in 1944 and Yale University in 1949. During World War II, he served in India with the American Field Service, and then later attended Columbia, where he earned his master’s degree in 1951. He held a Ph.D. from Harvard in history, which he completed in 1960.

In all, Hunt spent nearly 50 years on Harvard’s campus as a respected teacher, statesman, and keeper of its storied history. He was a senior lecturer in social studies, University Marshal from 1982–2002, and assistant, and later, associate dean of the Graduate School of Arts and Sciences during the 1960s and ’70s.

As University Marshal, Hunt represented the President and Fellows of Harvard College in all matters of protocol, including welcoming international visitors and heads of state to the University.

“Rick was so well suited to the role of University Marshal. He was gracious and always dignified,” said Margot Gill, Harvard’s current interim University Marshal and the administrative dean for international affairs in the Faculty of Arts and Sciences. “There is hardly ever a time as I greet our international guests and welcome these delegations to Harvard that I don’t think about Rick Hunt. … He is still a presence here.”

In that role Hunt also presided over special convocations, including Commencement. Colleagues say that he was known for his remarkable gift of diplomacy and for the way he was able to maintain great relationships across the University, attributes that ensured the success of the Commencement proceedings that unfolded under his nurturing watch.

“His children learned early from him how much more interesting it is to find out about others than it is to speak about oneself.”
— Susan Hunt Hollingsworth

Grace Scheibner, whom Hunt hired as Commencement director in 1993, fondly recalled Hunt’s mentorship while working alongside him over the course of 25 years. She still holds onto a handwritten note that Hunt had placed on her desk chair after finishing their first Commencement together. It reads, “Grace, a thousand thanks. Thank you a thousand times — Rick.”

“Rick was one of the most special people I have ever met, and I am grateful and deeply honored to have had the privilege of working with and learning from him,” she said. “He was a true living legend.”

Following his retirement, Hunt co-wrote the book “Harvard A to Z,” a collection of essays about the University’s history, from stories about its famous alumni and scholars to informative musings on its well-known landmarks and its lesser-known curiosities. “Rick loved telling Harvard stories,” said Gill. “He saw himself as the keeper of many of Harvard’s most cherished traditions.”

Hunt also adored the people within the Harvard community. The late Rev. Peter Gomes, long the Pusey Minister at Harvard’s Memorial Church, was a close friend, dedicating his collection of sermons “What We Forgot to Tell You” to Hunt, under the inscription:

With careful and considerate confidence
he ordered our public occasions
while sustaining with quiet conviction
our communities of faith.

Not all of Harvard’s Marshals have been Harvard faculty, but Hunt was, and he was a respected educator. He long taught a core curriculum course on Weimar and Nazi Germany, as well as a social studies junior tutorial on leadership and followership, while serving as chairman of the Faculty Committee on Religion, and as a member of the social studies and Center for European Studies committees.

“Rick was a true educator in every sense and in many roles at Harvard,” said Terry Aladjem, a lecturer on social studies and the former executive director of the Bok Center for Teaching and Learning. “In our too-infrequent lunches, he would ask probing questions about the Bok Center — as he cared deeply about teaching at Harvard, the cultivation of our graduate students, and so much appreciated the center as a living tribute to former President Derek Bok. As a scholar, he taught perhaps the longest-running tutorial in social studies on leadership and followership and was remarkably insightful about the nature of totalitarianism. One knows he was a phenomenal teacher because he would hold you in his attention completely, and it was impossible to leave a conversation with him without being enlightened. We have lost a truly wise and caring man.”

“There is hardly ever a time as I greet our international guests and welcome these delegations to Harvard that I don’t think about Rick Hunt. … He is still a presence here.”
— Margot Gill

Hunt led a busy life outside of Harvard, too, where he served as president of the American Council on Germany, a nonprofit organization devoted to strengthening American-German relations for 40 years, and he supported various organizations as a philanthropist, including as founding trustee of the Roy A. Hunt Foundation, named after his father, who was president of the aluminum giant Alcoa for 30 years. He was also a founding board member and vice chair of the National Center for Family Philanthropy.

Outside of his academic and philanthropic interests, Hunt maintained a variety of passions, in particular opera, magic, and tennis. A member of the Yale tennis team in the 1940s, he finally gave up the sport when his knees no longer allowed him to play. By then, he was in his late 80s. In those later years, Hunt played what he referred to as “Cinderella tennis,” wrote his daughter Susan Hunt Hollingsworth in a remembrance of her father, which meant he was “just hoping to make it to the ball.”

“Rick Hunt was an admirable person in every sense of the word — kind, generous, capable, conscientious, and invariably decent toward everyone he encountered,” said former Harvard President Derek Bok. “His true nature was revealed to me most clearly on the tennis court, where we met more times than I can possibly remember. He would occasionally make a bad call to end a point. Without exception, every one of these mistakes involved calling my ball in when it was really out, never the reverse. He was a loyal and accomplished colleague, who accomplished a lot for Harvard as a teacher and administrator. I count it a great privilege to have known him well.”

Hunt was a keen listener and lifelong learner, whether on campus or off. Wrote daughter Susan, “His children learned early from him how much more interesting it is to find out about others than it is to speak about oneself.” His son, Bill, added, “Our father defined ‘Renaissance Man.’ He read and studied nearly every conceivable subject, from ancient cultures, modern politics, and the strategy of the previous night’s Red Sox game. Most importantly, he was always interested in listening to others about their own interests and experiences. Everyone who knew him was dazzled by his unbounded intellectual curiosity.”

A memorial service will be held at a future date. Memorial contributions may be made to the American Council on Germany and The Posse Foundation.