A Q&A forum with the president 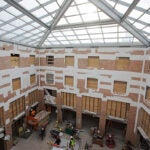 In an open meeting with students, Faust discusses an array of issues

Harvard President Drew Faust addressed an open meeting Wednesday hosted by the Harvard Undergraduate Council (UC), saying that the twin concerns of sexual assault policies and campus inclusion “have forced us and urged us” to examine University life more closely.

“We have to create a culture of belonging,” free of “micro-aggression, sexual dangers,” and other impediments to social freedom, she told the assembled students in her opening remarks, which were followed by a question-and-answer session. “One of my most deeply held aspirations as president has been to build a more diverse and a more welcoming Harvard.”

Before an audience of 80 in Emerson Hall, Faust discussed everything from the sexual assault policies (now being revised to match federal Title IX rules on sexual discrimination in education); to inclusion and diversity (mainstays of a changing University, she said); to queries about University investments abroad, student organization funding, mental-health services, and even the dwindling storage space at Houses undergoing renovation.

“We’re very glad that she’s here today,” said Gus A. Mayopoulos ’15 in his welcome. Mayopoulos, president of the UC, the student governing body, laid down a few rules, acknowledging inspiration from the Institute of Politics: questions must be 30 seconds or less, no speeches, and no chanting. “This is a forum,” he said, “not a protest.” The council had billed the event as a friendly “joust with Faust.” Seated next to Faust to moderate the session was UC Vice President Sietse K. Goffard ’15.

Most prominently, Faust discussed updating policies on sexual assault, and questions about inclusion and diversity sparked by the “I, Too, Am Harvard” photo campaign and resultant discussions. Before the questions, Faust said she had been “very struck” by those issues, and outlined some related core beliefs and aspirations.

Regarding the “I, Too, Am Harvard” campaign — with its implicit worries about inclusion from the 63 black students featured — Faust was admiring. She said it had generated discussion “here, and elsewhere, far beyond Harvard, about the extremely significant issues of inclusion and identity.”

As for sexual assault and the many issues that raises, Faust called the topic a matter of “safety and dignity and respect.”  It was a reminder, she added, that, “All members of the Harvard community [should] feel fully a part of that community and fully able to participate in it.”

Early this month, Faust named a task force chaired by former Provost Steven E. Hyman and charged it with improving the way the University responds to sexual assault. Hyman is the Harvard University Distinguished Service Professor of Stem Cell and Regenerative Biology and director of the Stanley Center for Psychiatric Research at the Broad Institute. In 2002, while provost, he founded Harvard’s Office of Sexual Assault Prevention & Response.

Meanwhile, a freshly drafted policy that responds to new Title IX requirements has been submitted to the U.S. Department of Education for review.

The big issues of sexual assault and inclusion have raised questions for the Harvard community, she said. Among them are “What is a community? What do we owe to one another in terms of safety and respect? What is our real identity? What are our values?”

On Tuesday, Faust met with the creators of  “I, Too, Am Harvard,” a play of the same name by Kimiko Matsuda-Lawrence ’16 that debuted on March 7.  Faust said the title “challenges us to ask ourselves: What do we want to be? If we are all Harvard, how are we going to define this place?”

Faust reiterated the University’s “fundamental commitment to diversity as an essential element of who were are,” adding, “We do it because it is right, and we also do it because it makes us a better institution.”

Then there is the growing diversity of Harvard, she said, which is marked by an incoming freshman class “more diverse than any class that has been admitted to Harvard before.” That fact has real meaning, she said. “We see a very close relationship between diversity and excellence. When we reach out to the broadest pool of talent, we are more likely to get the most talented people to join our community.”

Faust pointed to Harvard’s commitment to expanded access to the College, noting the 10th anniversary of a broadened financial aid program and an amicus legal brief filed by the University in the 2013 Supreme Court case Fisher v. University of Texas at Austin.

As for inclusion, that has to accompany the principle of greater access, said Faust, who acknowledged hard work ahead in creating a more welcoming culture.

The first questions were from student leaders. The opening inquiry, on plans for “concrete steps” regarding inclusion and diversity, came from Matsuda-Lawrence and Sarah F. Cole ’16, who represented black student groups. Faust said she awaited recommendations from a working group on the issues, headed by interim College Dean Donald H. Pfister, who was seated nearby. But Faust added that parts of the “I, Too, Am Harvard” campaign could help model an action plan.

A line of questions emerged about mental health, stress, and suicide prevention. “The issue of stress repeats itself at Harvard for every generation,” said Faust. “We should all be talking about … countervailing forces,” such as counseling services and social outlets. Pfister said a conversation on such topics is underway among house masters and others.

Responding to a question regarding investments in Argentina timber operations that have come under scrutiny, Faust noted that a member of the Harvard Management Company had penned an op-ed citing “misstatements” by opponents. “Any kind of debate about responsible investing,” she said, “must stick to the facts.”

As for a claim that only 40 percent of student activity requests get funded, Faust deferred to Pfister. He said the issue merits a serious look and shows the need for more bureaucratic flexibility, “but we’re in a period of real budgetary constraints.”

That question underlined a leitmotif threading through the session: Why do things take so long to be addressed?

“One of the characteristics of the University is that we are a very deliberative institution,” said Faust, and the mark of a diverse institution is that diverse opinions have to be considered. “Part of it is that there is not someone who can just dictate things.”

Motioning toward Mayopoulos, who wore his classic military-style uniform that included a short sword and epaulettes, Faust quipped that to implement a more dogmatic style of leadership, “I would need Gus’ sword.”