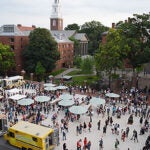 President Drew Faust recently announced the creation of a University-wide task force to recommend how the University can better prevent sexual misconduct involving students. The task force will include students, faculty, and staff from across Harvard University and will consult widely within the Harvard community and beyond.

Former Harvard Provost Steven E. Hyman, Harvard University Distinguished Service Professor of Stem Cell and Regenerative Biology and director of the Stanley Center for Psychiatric Research at the Broad Institute, will lead the committee. As a physician and scientist, and former director of the National Institute of Mental Health (NIMH), Hyman has deep experience in public health issues including prevention strategies. As provost, he founded in 2002 Harvard’s Office of Sexual Assault Prevention & Response (OSAPR), which works to prevent sexual violence through trainings and education and also provides confidential support for student survivors.

The Harvard Gazette recently sat down with Hyman to discuss the goals of the task force and the challenges associated with addressing sexual assault on college and university campuses.

GAZETTE: Why do you feel there was a need to create this task force now?

HYMAN: I see two critical factors. First, more than a decade ago when I was provost, we created a first round of reforms aimed at responding to sexual assault with a focus on supporting those who have experienced sexual assault. While those reforms, establishing the Office of Sexual Assault Prevention & Response as well as recommending new training modules, improved the climate on the campus, it’s crystal clear that they did not go nearly far enough. The recent, moving Crimson editorial, which I read just as we were about to launch this committee, underscores this point to me. There is a great deal more that we must do.

Second are policy changes related to Title IX concerning sexual assault and recently announced by the federal government. Harvard will, of course, meet these legal standards. It is critical, however, that we not limit our response to legal standards alone. Specifically, we must take seriously the challenge of prevention, and we must make sure that we provide appropriate support to students who have experienced violence and related forms of sexual misconduct.

This committee is not charged with examining procedures for investigation of complaints, adjudication, or punishment. Those difficult issues must be dealt with thoughtfully and well. Our mandate comes from the recognition that even if our administrative procedures can achieve the most just of outcomes in each case, lives may have already been terribly damaged. We simply have to find better ways to prevent these terrible incidents, and when they occur, also to effectively support students who have experienced sexual assault to maximize their ability to benefit from their educational and extracurricular experiences here.

GAZETTE: Can you briefly summarize the charge of the task force?

HYMAN: The first charge of the task force is both simple and difficult. The core of the charge is to find effective ways to prevent sexual assault and related behaviors. To do this we must access a fairly complete set of data about sexual assault at Harvard, including information known to students but not found in any compendium of statistics. Also critical to the long-term success of this committee and ultimately the University is to recommend ways of evaluating new programs for their effectiveness. A commitment to serious evaluation is extremely important because there is no set of simple recipes for what will be most effective in the Harvard context — or any context.

In accepting this role, I was heartened by President Faust’s desire that we look broadly for effective interventions. It is, of course, critical that all members of the community understand the rules, understand their responsibilities to others, and are aware of the resources available to address sexual assault and misconduct. From my prior experiences as NIMH director, however, where I was concerned with a wide range of preventive interventions, I recognize that education and training, while critical, are not enough by themselves, even if they are appropriately repeated at intervals. We will have to understand the factors that increase the incidence of sexual violence, including, but not limited to, alcohol, and consider ways of mitigating those factors. We must not conflate alcohol use with sexual assault, but we must not fail to address it.

GAZETTE: What questions will you seek to answer?

HYMAN: We are really going to try to understand the scope of the problem, the circumstances under which sexual assault and other sexual misconduct are most likely to occur — which may be different in the College and the graduate and professional Schools — and the contributing factors. We are going to have an excellent and diverse committee, including students. I believe that we will have several creative social scientists who will help us interpret that data and develop recommendations for prevention and evaluation. We should leave no stone unturned.

Clearly we have to work very closely with the Schools, many of which have been working assiduously on these issues. We want to be able to benefit from their work done, and to create synergies rather than duplications or conflicts.

GAZETTE: Is it important to have students as members of the task force?

HYMAN: Students are absolutely necessary. Students will be critical participants because it is fundamentally their experiences that we need to address. Their insight into how current systems of prevention and support have worked and how they have failed will be of central importance to our work. The faculty members on the committee will have expertise in thinking about data collection and analysis, education, preventive intervention, and support, but students will give us a more direct view of what’s actually happening and will help ensure that our recommendations are sensitive to the multitude of cultural issues and thus likely to take root. Another crucial role for students on the committee will be as conduits to peers not on the committee, who will also have important things to say.

GAZETTE: You mention consulting with other Schools. Will the task force be reaching out to anyone else from the Harvard community for input?

HYMAN: We have to find ways of hearing from many voices, both inside Harvard at all of our Schools, and outside Harvard as well. We have to look for what has worked best and what has looked promising but failed.

GAZETTE: The University has been working on new policies and processes regarding sexual assault. How does the task force’s work relate to that effort?

HYMAN: Our role isn’t to second guess the policies that are being developed, but I am sure that if through our research and data analysis we discover something that would suggest a change in policy, we would have the opportunity to convey such data to the appropriate people at Harvard.

GAZETTE: Can you tell me what the next steps are?

HYMAN: The committee roster will be finalized. I want to have some substantial meetings before the summer to organize our work and to commission some research, and to work out a process that will allow us to take testimony in the autumn.

GAZETTE: Any other thoughts on the work ahead?

HYMAN: Sexual assault and sexual misconduct are extremely damaging both to individuals and to the broader Harvard community. We need to understand these issues better than we have so far. We must then be committed to finding effective approaches to prevention that can be embraced and implemented by this community.  I am very much aware that there is no magic bullet, and that not everything that we recommend will prove effective. Thus we must not be satisfied simply by issuing a persuasive report, but must be relentless in trying to get this matter right in the present, and to encourage the University to make the long-term commitment that will be required well beyond the life of this committee.