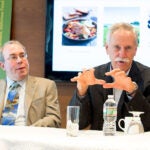 Healthy menus for people and planet

Harvard Stem Cell Institute (HSCI) researchers have identified in the most aggressive forms of cancer a gene known to regulate embryonic stem cell self-renewal, beginning a creative search for a drug that can block its activity.

The gene, SALL4, gives stem cells their ability to continue dividing as stem cells rather than becoming mature cells. Typically, cells only express SALL4 during embryonic development, but the gene is re-expressed in nearly all cases of acute myeloid leukemia and 10 to 30 percent of liver, lung, gastric, ovarian, endometrial, and breast cancers, strongly suggesting it plays a role in tumor formation.

In work published in the New England Journal of Medicine, two HSCI-affiliated labs — one in Singapore and the other in Boston — show that knocking out the SALL4 gene in mouse liver tumors, or interfering with the activity of its protein product with a small inhibitor, treats the cancer.

“Our paper is about liver cancer, but it is likely true about lung cancer, breast cancer, ovarian cancer, many, many cancers,” said HSCI Blood Diseases Program leader Daniel Tenen, who also heads a laboratory at the Cancer Science Institute of Singapore (CSI Singapore). “SALL4 is a marker, so if we had a small molecule drug blocking SALL4 function, we could also predict which patients would be responsive.”

The HSCI researchers’ inquiry into the basic biology of the SALL4 gene, however, revealed another way to interfere with its activity in cancer cells. The gene’s protein product is responsible for turning off a tumor-suppressor gene, causing the cell to divide uncontrollably. Using this knowledge, the researchers demonstrated that targeting the SALL4 protein with druglike molecules could halt tumor growth. “The pharmaceutical companies decided that if it is not a kinase and it is not a cell surface molecule, then it is ‘undruggable,’ ” Tenen said. “To me, if you say anything is ‘undoable,’ you are limiting yourself as a biomedical scientist.”

Chai took blood samples from patients with acute myeloid leukemia, treated the leukemic cells with the inhibitor that interferes with SALL4 protein activity, and then transplanted the blood into mice. The result was a gradual regression of the same cancer in mice.

“I am excited about being on the front line of this new drug development,” Chai said. “As a physician-scientist, if I can find a new class of drug that has very low toxicity to normal tissues, my patients can have a better quality of life.”

Chai and Tenen are now working with HSCI Executive Committee member Lee Rubin, the Harvard Institute of Chemistry and Cell Biology, and James Bradner of Dana-Farber Cancer Institute, another HSCI-affiliated faculty member, to overcome the technical challenges of drug development and demonstrate the potential of SALL4 interference to treat other forms of cancer.

“I think as academics, we seek to engage drug companies because they can do these types of things better than we can,” Tenen said. “But, also as an academic, I want to go after the important biologic targets that are not being sought after by the typical drug company — because if we do not, who will?”