The IOP Forum gives voice to the U.S. experience in Afghanistan 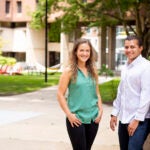 Military service members, now part of the HKS community, reflect on what the recent withdrawal of U.S. troops from Afghanistan means to them.

In an emotional program, the John F. Kennedy Jr. Forum at the Institute of Politics (IOP) gave the stage to U.S. military personnel who served in Afghanistan and are members of the HKS community. IOP Executive Director Setti Warren, who served as a naval intelligence specialist in Iraq, moderated a panel of five who told their stories of grief, anger, and gratitude. “In 2008, I did a year-long deployment and I’ll never forget civilian brothers and sisters, family members, saying, ‘thank you for your service,’” recalled Warren. “While I appreciated that very much, I wondered if there was some way I could share with everyday people, voters, public policymakers, elected officials, perhaps those making decisions to send troops into harm’s way, what it was really like on the ground, in a combat zone. That’s what this conversation is about this evening.”