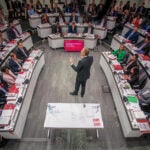 Only 27 percent of Americans are aware of President Donald Trump’s plan to lower prescription drug prices and few believe that it will actually achieve its aim, according to a new POLITICO-Harvard T.H. Chan School of Public Health poll.

It could prove tough for lawmakers to campaign on the issue and rally voters around drug pricing because so few people are aware of the plan, according to a July 23, 2018 article in POLITICO. “When you have something like this where people think it’s an important issue, but they aren’t following what the president does, it suggests it won’t be a major differentiator in the campaign,” said Robert Blendon, the Richard L. Menschel Professor of Public Health and Professor of Health Policy and Political Analysis at Harvard Chan School.