A new day of celebration 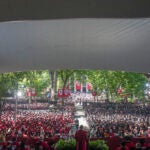 Even overcast skies and rain couldn’t dampen the festive spirit on campus on Friday, as thousands of alumni from around the world came together in Tercentenary Theatre to participate in the first-ever Harvard Alumni Day — a University-wide event celebrating alumni impact, citizenship, and community.

Harvard Alumni Day, now distinct from Commencement and coinciding with Harvard and Radcliffe College reunions and other important alumni programs happening across campus, marked the inauguration of a re-envisioned annual celebration — a day dedicated entirely to alumni, enabling a greater focus on Harvard’s ever-growing and vibrant global alumni community. More than 22,000 alumni and friends also tuned into the livestream.

Led by this year’s chief marshal of alumni, Allyson Hobbs ’97, and the eldest alumni in attendance, Linda Black ’51 and Henry Lee ’48, the Alumni Parade marched from the Old Yard and Sever Quadrangle to Tercentenary Theatre, accompanied by bagpipes and the Harvard University Band.

The sun broke through the clouds for the program itself, which was called to order by 2021–22 Harvard Alumni Association president Vanessa W. Liu ’96, J.D. ’03, followed by a video featuring alumni in countries around the world sharing their thoughts on this special day and celebrating Harvard’s global alumni community of more than 400,000.

In her remarks, Liu noted that in this time of concurrent crises — public health, racial injustice, gun violence, climate change, and the humanitarian situation in Ukraine — community and the role of alumni as citizens and citizen leaders have become more important than ever, recognizing how Harvard’s alumni network has stepped up meaningfully in recent years to respond to these issues. She ended by challenging the audience to “embrace differences, celebrate collective commonality, and take action” — and to come together not only for celebrations such as this but to “shape the world we want to live in and forge a brighter path forward.”

Liu also acknowledged incoming HAA president Allyson Mendenhall ’90, M.L.A. ’99, the first alum of the Graduate School of Design to serve in this position, and called out Harvard Board of Overseers member Ketanji Brown-Jackson ’92, J.D. ’96, who recently made history as the first Black woman confirmed to the Supreme Court — and received a standing ovation from her fellow alumni.

Hobbs, whose award-winning writing, scholarship, and teaching tackle the history and lasting impact of race in the U.S., spoke about the Report of the Presidential Committee on Harvard and the Legacy of Slavery, commending it for its “revolutionary and groundbreaking scholarship” and how it casts a light on the University’s highest ideal: truth. “Confronting truth is a community-wide endeavor,” Hobbs said, adding that in these tumultuous times — when envisioning a better, more just world can seem naïve — alumni can find inspiration in their fellow “talented, compassionate, and empathetic classmates” who “make it plain that Veritas is not just a motto carved in stone but a work in progress.”

In his address to the alumni, Harvard President Larry Bacow described what makes Harvard so extraordinary, citing its faculty, its phenomenal students, and ultimately its alumni, who are making a positive impact across the globe. Marveling at the number of Harvard alumni serving in public office, he noted that they are “carrying on a tradition of public service that is as old as Harvard itself.” He also recognized Harvard alumni serving in the military and alumni contributions to everything from music and sports to technology and business, noting that Harvard’s outsized reputation is a result of the “outsized hope and aspirations of people, all of whom call Harvard our home.”

Two-term U.S. poet laureate and Pulitzer Prize–winner Tracy K. Smith ’94 — professor of English and of African and African American Studies in the Faculty of Arts and Sciences and the Susan S. and Kenneth L. Wallach Professor at Harvard Radcliffe Institute — offered a meditative keynote address. She shared her own emotional journey in processing the world around her and asked the audience to consider what it means to flourish in a time of uncertainty. “Might flourishing be the result of living together in such a way that love rather than tolerance, community rather than division or tribalism, and reciprocity rather than transactional exchange comprise the things we seek to offer and receive?”

Reciting poems from Lucille Clifton and D.H. Lawrence, Smith invited the audience to consider what tools we might need to engage in what she called “civic care” to uphold peace and safety for ourselves and for each other.

At the end of the program, alumni in attendance joined together to sing “Fair Harvard.” It was a momentous day for the entire Harvard alumni community, whether celebrating in person or virtually. Many are already eager to attend next year’s Harvard Alumni Day, which will be held on Friday, June 2.