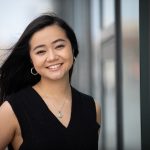 At home a famous actress, Ece Hakim realized another dream in four years at College

Turkish actor Ece Hakim said it was her experience as a 12-year-old watching Natalie Portman ’03 in “Black Swan” that inspired her goal of studying psychology at Harvard.

Hakim, who was by then already an established child actor, recalls being “absolutely mesmerized” by Portman’s Academy Award-winning performance in the harrowing drama. “I looked her up and saw that she went to Harvard and studied psychology. I decided I needed to go to Harvard and learn psychology so I could be a good actor like her.”

This spring, she fully realized her dream of walking in Portman’s footsteps, graduating with a concentration in psychology and a secondary in history.

Hakim, who has appeared in 10 soap-opera-style television series and two movies in Turkey, plans to continue her acting career after graduation, this time in the U.S. But she values what she learned from psychology, a discipline she recognized early on offers important insights for acting.

“As an actor, I used to spend a lot of time thinking about characters’ inner worlds, people’s emotions,” she said.

At Harvard, a particular focus of her studies has been the connection between emotion and language, which she also sees as a vital subject for acting and other arts.

Her senior honors thesis concerned the well-known riddle in which a father and son are in a car crash that kills the father; when the son is taken to the hospital, the surgeon says, “I can’t operate on this boy, he’s my son.” That so many fail to correctly answer that the surgeon is the boy’s mother is used to illustrate gender bias.

Hakim conducted a study that found when the word “son” was replaced by “child” in the riddle, 40 percent of test subjects got the answer right, twice as many as those given the original wording. She theorized that was because “child” is a gender-neutral term.

“When people see the word ‘child’ it prompts them to think of all genders, so they are more likely to think of a female surgeon. This supports this whole literature of how gender-neutral language is very effective in reducing our gender stereotypes,” and shows “the importance of everyday language,” Hakim said.

After graduation, Hakim is headed home to Turkey to spend time with her family and potentially do some acting. After that, she is bound for Los Angeles, where she has a marketing job lined up to support her while she auditions for acting roles.

Growing up in Istanbul, Hakim was put on the path to acting at age 5, when her mother signed up her and her brother with a casting agency to help with the family’s finances. Within a year, Hakim was cast as a ghost in a movie.

Some of her notable television roles have been a daughter of the character Susan on the Turkish version of “Desperate Housewives,” and most recently the daughter of a Mafia kingpin. Because she had to leave for College, her character was “killed off” in the latter series in 2017.

“It was funny because I was ‘shot’ by a CIA agent in that show and when I came to Harvard on the career services’ website I saw a listing for an internship at the CIA,” she said.

Hakim said balancing school and acting was difficult, noting that especially in high school, “I was not getting enough sleep. I used to stay on the set till 6 in the morning and come to school right after.”

When she arrived at Harvard, Hakim — who has about 151,000 Instagram followers — said it felt funny at first being in a place where she was not well-known, although her anonymity was not complete.

“When I first came here I went to Starbucks in the Square and was talking to some friends about it, saying, ‘I don’t have to be conscious about what I’m doing now — no one recognizes me.’ Just then a Turkish tourist happened to be at Starbucks and recognized me.”

While she misses professional acting, Hakim said she has enjoyed the break from it. “I had four years of life in which I could just enjoy being a student.”

Hakim kept her foot in her profession during College, appearing in productions of the Harvard-Radcliffe Dramatic Club. She was also arts editor for the Harvard Advocate and an active member of the Harvard College Turkish Student Association.

As an international student, Hakim faced special challenges due to COVID-19, including having to remain on campus when most others were gone. But she credits the University for easing the hardship.

“During the whole time I felt safe, I felt taken care of,” she said.

Hakim said of the teachers who were particularly helpful to her, Professor Mahzarin Banaji from the Psychology Department stands out.

“She really inspired my research a lot,” Hakim said of Banaji, her senior thesis adviser. “And she inspired me as a person as well.”

Noting that “before coming here, I hardly knew the world beyond Turkey,” Hakim said a highlight of her undergraduate experience has been meeting people from diverse backgrounds.