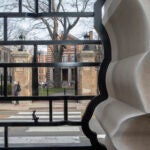 Harvard initiated an external, independent review of the Harvard University Police Department (HUPD) in June, focusing on its internal practices and procedures as well as its interactions with community members. The University hired 21CP Solutions to conduct the examination, and today its final report is being released. The Gazette spoke with Executive Vice President Katie Lapp to discuss the findings and how Harvard plans to implement its recommendations, including a fundamental reimagining of ways to secure public safety and community well-being. Lapp also discussed how the report is guiding the ongoing nationwide search for a new police chief to replace Francis D. “Bud” Riley, who is retiring at year’s end.

GAZETTE: Could you begin by reminding us of the rationale for conducting this review, now?

LAPP:  This review was both necessary and extremely timely, as it put a clear focus on the work that we as a University community must take on, and which frankly is overdue. The demographic makeup of Harvard has changed significantly over the past two decades, so that our community now includes many more diverse voices who have experienced historically different relationships with police. Many have shared important perspectives on the role of policing in public safety, and we need to be more inclusive of these views in addressing the safety and well-being of our campus community.

This reality has been put into harsh perspective this year in particular, amid the context of a national conversation about race and policing following the killing of George Floyd. The Harvard community’s views about the role of the HUPD, and how it needs to evolve, are inextricably connected to this ongoing national dialogue.

In my view, this review gives us the right framework to renew, and at the same time reconceptualize, our commitment to the safety of our community. It has given us the opportunity to engage community members, across all stakeholder groups, in a reimagining of what public safety should be at Harvard, and how we can begin to lay the groundwork for deep, sustainable change.

GAZETTE: What are the main findings of this report?

LAPP:  First off, I’d strongly encourage every member of the Harvard community to read the report. The voices and perspectives of dozens of community members are reflected in the narrative, but the external review process was only one step toward the broader goal of reimagining public safety at Harvard. The ongoing input of students, faculty, and staff, inclusive of the HUPD, will be vital in our ability to successfully, and transparently, redefine public safety and identify the appropriate mechanisms that need to be put in place to achieve that new vision.

The report itself, which was conducted by 21CP Solutions, and led by public safety experts Ron Davis, Brenda Bond, and Matthew Barge, provides a roadmap toward this new vision through a community-driven, stakeholder-informed process that will comprehensively evaluate and reappraise how Harvard works to ensure the safety and well-being of its community members. It also recommends immediate areas of improvement within the HUPD, such as communication, strategic management, policies and procedures, and relationships with the community.

GAZETTE: Tell us more about this roadmap forward. What does the report suggest Harvard do, and how quickly can Harvard get to work, especially considering that we remain entrenched in a pandemic?

LAPP:  The ongoing realities of COVID-19 will indeed be a challenge to this critical work, as it is to many strategic projects across the University, but it’s so important that we sustain the momentum of this community-informed review. And while this process will be a comprehensive one that takes place over time, we are acting now to lay the foundation for the important work that is to come by conducting an assessment of models used by municipalities or other higher education campuses that implement varied response systems to calls for assistance from community members.

GAZETTE: Can you explain more about how these systems differ from what Harvard currently has in place?

LAPP:  These models take into account how a situation or call for assistance is responded to based on the circumstances of that situation. Obviously, the safety of our community is paramount, but not all calls for assistance require a uniformed officer to respond. That said, the model that has evolved over time here at Harvard and in many communities is that the first reaction is to deploy a police officer regardless of the nature of the call. It’s important that we see what models are being used in other places that draw on other resources or services within the University, such as mental health, to respond to calls for assistance or to supplement a police response. And more than just studying these models, we need to catalog the resources that are currently available at Harvard or might be needed as we consider a potential new response structure.

GAZETTE: What are some of the action steps Harvard is taking based upon the recommendations to come out of the report?

LAPP:  Harvard will create two groups to pick up the important work this review has started, and we will ensure that these groups are in place within the coming months. Both of these groups will reflect the University’s diversity, and be comprised of students, faculty, and staff alike.

By March 31, an HUPD advisory board will be convened to begin to provide guidance and feedback to the HUPD as well as the University on how well the department is serving the community. By April 30, we will announce a facilitating committee that will undertake a structured community conversation designed to clearly define the Harvard community’s expectations with regards to safety and well-being.

LAPP:  The members of the facilitating committee are expected to be the coordinators of this community-wide dialogue on reimagining public safety, but it is important to emphasize that they are far from the sole participants in the process. Their task will be to engage Harvard’s diverse communities in conversation on what the systems, processes, and structures for providing safety and well-being at Harvard could look like going forward. And they will have as a guide the material we will be assembling on other models of public safety in addition to Harvard’s existing resources and how they might be utilized to adapt to new models.

The HUPD advisory board will consider more immediate-term changes to enhance how the HUPD can advance an inclusive environment for all members of the department as well as improve external relationships with the Harvard community, even as we consider how we can develop a more expansive model of public safety over the long term. To that end, the board will engage department leadership on its progress in implementing the recommendations of this report, as well as provide regular input on additional measures that could help the department in fostering strong relationships across the campus community.

This spring, the University will also begin work on a new HUPD annual reporting process which incorporates recommendations from the external report, and we will launch a data dashboard for relevant HUPD performance indicators for review and input by the advisory board, with the goal of having the dashboard operational and available to community members no later than June.

LAPP:  The new chief will of course be a necessary part of the solutions and work going forward, and so the report is serving as an important resource as the HUPD chief search committee and University leadership consider candidates.

The clear pathways for reform set out in this report will be part of the charge for the new chief, whom we expect to announce in the coming months. I’m hopeful that the input of the broad cross-section of Harvard’s community that informed 21CP’s findings, along with the initial stages of work conducted ahead of the new chief’s start date, will provide invaluable insight into how the new chief can begin to lead toward positive change.

GAZETTE: Can you provide an update at this time regarding the search?

LAPP:  Since the beginning of the academic year, the committee has held 13 listening sessions with students, faculty, and staff from across the University in an effort to directly gather their diverse perspectives and input on the process and the way forward.

We are working with a search firm with a long record of success in higher education and in placing public safety professionals. The firm has done a nationwide search and presented a diverse group of potential candidates for the committee’s review. They are now completing the preliminary application review and will begin first-round interviews via Zoom early in 2021. Our intention is to work hard to identify the right candidate and take the time to do so.

Of course, Chief Riley is retiring at the end of the calendar year, and so beginning Jan. 1, Deputy Chief of Operations Denis Downing will serve as the interim chief until the new leader of the HUPD begins their tenure.