Taking inclusion to the HILT 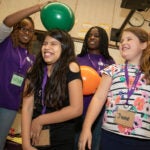 A science club for girls

If all you’ve got is lemons, make lemonade. If what you’ve got is a pandemic that has forced all teaching and learning online for the past eight months and will continue to do so for the foreseeable future, make it an opportunity, said Harvard President Larry Bacow.

“Eyes and ears forward — that imperative takes me back to elementary school. Today we are not so unlike what we were back then — eager to learn, but perhaps distracted,” Bacow told an online audience at the Harvard Initiative for Learning and Teaching (HILT) seminar on Oct. 16. The conditions, he said, can be ideal for creating more inclusive classrooms and more equitable instruction.

“There’s not much to recommend a pandemic but it has made more dimensions of our lives visible to one another, and created opportunities for the kind of sympathy and empathy that lead one to understand and appreciate others. I imagine that many of you know more about the circumstances of your students’ lives, and the challenges they face, than you have in years past. And I imagine that they know more about the circumstances in your life — whether they be revealed in glimpses of home decor, or Zoom bombs by children and pets.”

Bacow said that the work of diversity, equity, and inclusion is about making connections with and gaining understanding of one another as individuals, especially those from different backgrounds. This, he said, can ultimately lead to discussions of power and privilege.

The morning panel, “A Conversation on Inclusive Excellence,” was moderated by Harvard’s chief diversity and inclusion officer Sherri Ann Charleston. In her opening remarks Charleston quoted from W.E.B. DuBois’ “The Souls of Black Folks” the unasked question that he faced as a Black intellectual: “How does it feel to be a problem?”

Charleston urged teachers to treat inequality, rather than students, as the problem to be solved, and invited the panelists to examine the broader structures that might shape their students’ experience.

Anthony Jack, assistant professor of education at the Graduate School of Education, talked about the “hidden curriculum” encountered by lower-income Harvard students who are the first in their family to go to college: “That system of unwritten rules and unset expectations.” He said the divide might show up in a simple concept like “office hours”: To students whose parents didn’t attend college and who didn’t go to prep school, the very idea might seem foreign.

“We expect students to know the lingo, the shorthand, the nomenclature of our campus before they arrive, and so a lot of students get tripped up on the social side of academic life,” Jack said. Campus officials, he said, need to realize that not everyone adapts quickly to a predominately wealthy and elite space. “We can create a floor for our students to stand on, rather than a ceiling to bump into.”

María Luisa Parra, senior preceptor in Romance languages and literatures in the Faculty of Arts and Sciences, noted that the Latinx community brings a particular set of strengths to campus by virtue of the discrimination it has experienced. “By the time they arrive at an institution like Harvard, they have made really significant efforts to succeed in a system that, through different mechanisms, pushed them out systematically. But they have managed to succeed.” As a linguist, she noted that Spanish is taught at Harvard as a second language, but not often spoken in classrooms as a primary one. She said changing this would affect the level of value and recognition that these students encounter.

“We can create a floor for our students to stand on, rather than a ceiling to bump into.”
— Anthony Jack

Clint Smith, a Harvard Ph.D. and staff writer at The Atlantic, pointed out the subliminal messages that minority students receive at Harvard and beforehand.

“They are still coming into College in the context of a world that has told them, over and over again, that they are exceptions to the rule, that they have escaped a culture or community that is laden with laziness, or saturated with violence. … Our students are told they are exceptional in ways that are meant as a compliment, but are ultimately legitimizing a larger set of oppressive conditions and social forces.”

Charleston invited the panelists to come up with practical changes to help them engage with their students. Parra said that she strives to bring more critical thinking into her classroom, and to include course materials that are relevant to her students’ cultural backgrounds. “It’s not just the access to resources, but the content of those resources has to be part of the discussion,” she said.

“So many young people are consumed with the idea that they have to escape the community that they came from — that place was bad and holding them back, this place is good where they can achieve mobility. We have to problematize and complicate that idea,” Smith said.

“Students shouldn’t have to feel that they need to leave places behind in order to be successful moving forward.”