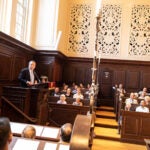 If you want to find it, just look for the crowds.

“We’re tourists,” shrugged Sandra Coh from Lyons, France, who was there one morning with her daughter and two grandchildren. “We visit and we take pictures.”

A quick Instagram search for “John Harvard Statue” yields a possibly endless feed of campus visitors posing with the iconic figure, one of the most photographed statues in the U.S. — as high as No. 3 on some lists. Most of them appear to be tourists from all over the U.S. and around the world, but not all of them. Some are prospective students and parents on a campus tour, while others are newly minted Harvard students celebrating their admission.

Tour guide Maddie Earle encouraged her group to take as many photos as they wanted with the statue, built in 1884, and told them that touching the left foot, cast in bronze but now polished to a shiny golden color, brings good luck.

A number of local tour companies include Harvard’s campus in its stops, and there are also the University’s official historic tour and the well-known Hahvahd Tour led by current students.

There are, however, pilgrims who choose to linger. Raju Psn, visiting from Hyderabad, India, took his time, carefully studying the details sculpted by Daniel Chester French, who created the statue of Lincoln for the memorial. Psn examined the skullcap, the tassels in the collar, the small mustache. He leaned in close to the floral bows decorating the shoes and knelt to get a better look at the two seals on the side of the granite plinth — the seals of Harvard College and Emmanuel College, where Harvard earned his B.A. in 1632 and M.A. in 1635.

Psn knew neither the history of the statue nor of Harvard himself, but he knew the bronze work had come to embody the University and its lofty ideals.

“It’s an inspirational place,” he said. “It gives us energy.”

“It’s an inspirational place. It gives us energy.”

So it was probably a good thing that he missed Maddie Earle. “That’s not John Harvard,” Earle ’20 informed a crowd of about 20 on one of the day’s University tours. The guide explained why campus residents refer to the landmark as “the statue of three lies.”

The first, she said, is that it depicts John Harvard. All portraits of the real man burned in a fire in 1764, so the model for the statue was Sherman Hoar, Class of 1882, a relative of Leonard Hoar, the University’s fourth president.

“It is a tradition here at Harvard to name Houses after former presidents,” Earle said. “They didn’t want to name a House after this particular president for obvious reasons, so they decided to use his nephew as a regal-looking figure to commemorate John Harvard.”

Earle encouraged her group to take as many photos as they wanted with the statue, built in 1884, and told them that touching the left foot, cast in bronze but now polished to a shiny golden color, brings good luck.

That tradition is well-known and is often spread on the spot.

In the middle of an afternoon crowd of about 20 people, Nacho Ruiz from Cordoba, Spain, told Eric Peoples from Detroit about the left foot as they waited their turn for a picture with it. In Ruiz’s version of the legend, if a person doesn’t touch the left foot they will never finish their college degree.

Either way, Peoples had his teenage daughter Tia Jackson take a photo touching the left foot.

“It’s the iconic thing to do. It’s as though your experience would be lacking something if you didn’t.”
— Sammota Mwakalobo, pictured below leading a tour

Many people with children do the same, in belief of another version of the lore. Marco Mayolo and Tatiana Espinosa, both teachers in Colombia, took turns touching the foot before helping their son, 9-month-old Santiago Mayolo, do the same. “We know of the University legend that if you get a picture with the statue, you will study here in the future,” Mayolo said.

For Harvard students, the lore is more about marking the moment, said Sammota Mwakalobo ’20, an international student from Tanzania studying mathematics. She was at the statue leading young Japanese students on a campus tour.

Mwakalobo remembers that three years ago she, too, took a photo with the statue to celebrate the start of her life at Harvard and in the U.S.

“It’s a thing that’s expected,” she said. “It’s the iconic thing to do. It’s as though your experience would be lacking something if you didn’t. For me, it marked the beginning of my journey.” 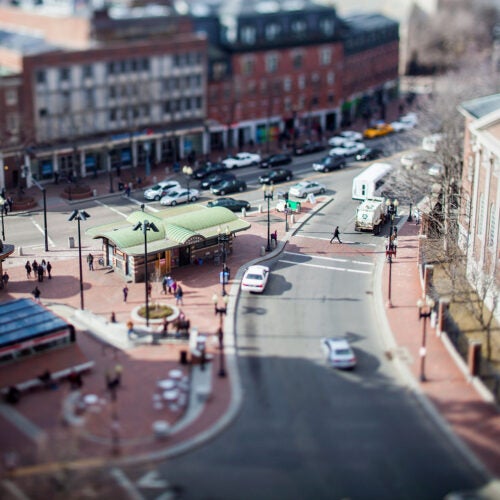 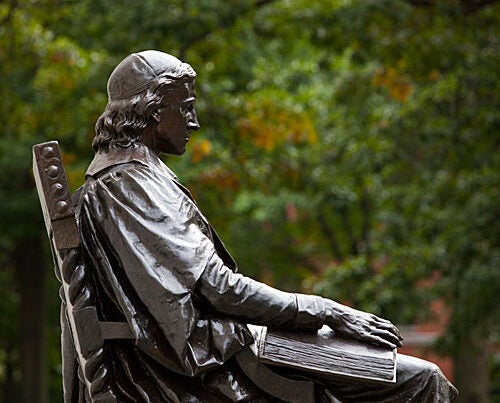 Biography of a bronze

John Harvard in detail, 375 years after his death