Biography of a bronze 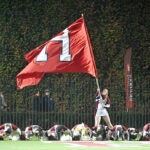 John Harvard in detail, 375 years after his death

The John Harvard Statue has been part of University iconography since 1884. But here are a few things you may not know about the young man depicted in bronze: He has a mustache (look closely); he is wearing a skullcap; there are tassels at his collar, and roselike decorations dress up his plain Puritan shoes. Then there are the hard-to-see books scattered under the statue’s chair, companions to the single volume on his lap. (It’s not a Bible.)

Meanwhile, everyone knows that the statue’s handsome features were modeled on those of Sherman Hoar, Class of 1882, a Concord native with deep New England roots. (His great-grandfather, Roger Sherman, signed both the Declaration of Independence and the Constitution. And he was related to Leonard Hoar, Harvard’s fourth president.)  But not everyone knows that Sherman lent only his face to the project; the body was modeled after a cash-strapped Oxford graduate who offered to pose for pay.

Looking closely at the John Harvard Statue is one of the requirements in “Tangible Things: Harvard Collections in World History,” a General Education course being co-taught this fall by historian Laurel Thatcher Ulrich, 300th Anniversary University Professor. “Harvard Yard is a time capsule,” said Ulrich, “and you’re in many centuries in any one moment.”

The statue itself — first sited in front of Memorial Hall and then moved to the Yard in 1924 — represents 1884 as much as it does 1636, Ulrich said. For one, it shows an idealized Harvard student through a defiant Mayflower lens, while the wider 19th-century world was becoming more explicitly diverse. “It’s such an Anglo-Saxon specimen, at a time of mixing,” said Ulrich. “But [Harvard Yard] is a changing scene and people are going to look at it through the lens of their own experience.”

Ulrich’s course, co-taught with Chipstone Foundation curator Sarah Anne Carter, Ph.D. ’10, is her second to investigate artifacts in Harvard’s collections of material culture, from glass flowers and botanical specimens to one of Henry David Thoreau’s pencils. The statue, part of a required Harvard Yard “walkabout,” was one of the first objects the class examined.

The study was timely, with September marking the 375th anniversary of John Harvard’s death. The new college’s first benefactor, whose parents, biographers say, were introduced by William Shakespeare, died of tuberculosis on Sept. 14, 1638, after having lived on American soil just 13 months. He was 30, a Puritan minister and religious exile from England, where he had graduated from Cambridge University’s Emmanuel College, then a conservative Calvinist enclave known as “pure” Emmanuel.

After a three-month ocean voyage, Harvard arrived in Boston with his wife, Anne, in August 1637, nine months after the idea of a college in New England was first conceived. He brought with him about 300 hard-to-get books, a Puritan’s desire for religious liberty, and — one biographer speculates — a consumptive’s wish for clean air. In New England, one breath of it was said to be “better than a whole draught of Old England’s ale.”

This quiet son of a London butcher was modestly wealthy from inherited real estate, and his seven years at Emmanuel, where John Milton was a classmate, left him well educated. But during his brief sojourn in the New World, Harvard was “not distinguished as a disputant,” a contemporary said, and left no theological writing. There is no description of what he looked like or even the exact location of his grave. Centuries later, one commentator called Harvard’s life “miniature.”

But he at least knew the landscape of Cambridge, since early in his stay he was part of a 24-day theological synod. This episode may have set his heart on helping the future college. He left no scholarship behind, acknowledged onetime Harvard president Edward Everett, but instead “took a less-beaten path to the veneration” — that is, his name. In 1638 it was attached to a wilderness Puritan college that later became a famous institution of learning.

Of course, Harvard also left his library, by then about 400 volumes, and a sum of money. The exact amount is unknown, but one early accounting put it at 779 pounds, 17 shillings, and 2 pence.

It was Everett who called for the first monument to the man who gave his name to Harvard, a granite obelisk erected in a Charlestown burial ground. (Alumni were asked to contribute $1 each.) Everett called Harvard’s gift “a sacred well,” but remembrances of the giver himself were scant for the first 250 years of University history. In 1838, at the College’s 200th anniversary celebration, only one of 40 toasts went to Harvard, “an unknown stranger” to whom fate had given “a deathless name.” Emmanuel College seemed more attentive. In June 1884, during its tercentenary celebration, Harvard’s alma mater honored him with a stained glass window in its chapel. It depicts a thin young man — pale and shy — with long auburn hair.

Charles Eliot Norton, Harvard’s first art history professor, represented the University at the window’s dedication. He described a benefactor that the school itself had barely acknowledged in 2½ centuries. “We see him now,” said Norton, “as one of the Great-hearts of his generation.”

At last, a statue

Back in Cambridge, plans were well under way at Harvard to make up for institutional neglect. Boston philanthropist Samuel James Bridge — whose interest in American history included an urge to rescue its neglected figures — wrote an 1883 letter to alumni, offering to pay for a bronze statue of John Harvard done by Daniel Chester French. It was unveiled on Oct. 15, 1884, and within a month was coated with tar, the first in a 130-year series of pranks.

During the dedication ceremony, Harvard President Charles William Eliot called the 1637 gift a “disinterested deed of hope and faith” that crowned “a brief and broken life with deathless fame.” The main speaker, George E. Ellis, D.D., assured listeners that the idealized statue was not a “simulacrum.” He even pledged that if in the future “some authentic portraiture” of the real Harvard were to emerge, the bronze would be melted down.

Not much chance of that. Ulrich said the statue has become — at least to tourists — “the symbol of Harvard … a focal point in the oldest part of the Yard” now deeply associated with the University itself.

Meanwhile, the statue benefits students of history searching for a material portal of a lost age — in this case, the Harvard of both 1884 and 1636. Ulrich speculates that French, the sculptor, was inspired in part by a 1651 portrait of Mayflower passenger Edward Winslow, whose collar, buttons, tassel, and mustache seem replicated in the statue.

The floral bows on John Harvard’s brass shoes are an aristocratic touch not quite at home on a Puritan minister, said Ulrich. But students at early 17th-century Cambridge decorated their shoes that way during Harvard’s time, though perhaps not at severely Calvinist Emmanuel.

Ulrich points to another likely inspiration for French: a 1592 Dutch print of Clio by Hendrick Goltzius owned by the Harvard Art Museums. It depicts the Greek muse of history seated with a tablet on her lap and two books at her feet. Some early critics of the statue thought the College’s memorial should depict the mythical Clio instead of a faux John Harvard.

Then there is the matter of posture. “Statues of great men are not often seated,” said Ulrich. But in 1920 French made another exception in his most famous work of public art: the statue at the Lincoln Memorial, which depicts a seated 16th president.

French himself deserves more attention in the context of Harvard artifacts, said Ulrich of her twice-weekly class. “But 50 minutes goes fast.” The sculptor, who has seven other works at Harvard, was in the center of a post-Civil War America that seemed intent on remembering its history in grand and public terms.

As for the John Harvard Statue, Ulrich was left with a sense of wonder that it remains so stubbornly popular. “What surprises me is the crowds — I can’t get over that,” she said. “What else do you do when you come to Harvard Yard? Everybody you know has a picture in front of the statue.”

But the icon “destabilizes” any sense of history and chronology it aspires to give, she said. Is it about the 19th or the 17th century? How about its reputation as “the statue of the three lies”? (It does not depict the real John Harvard; he was not the founder; and the College was founded in 1636, not 1638.) And what about the golden shiny toe of John Harvard’s left shoe? Rubbing it for luck is not an old practice, since vintage photos fail to reveal any shine. To Ulrich, the toe worship also has an idolatrous touch that would have horrified a Puritan.

That’s the beauty of investigating the truth behind artifacts, she said. “If you don’t provide a rich history, people will make it up.”