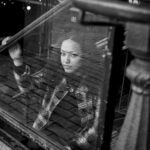 DAYTONA BEACH, Fla. — Two hours before the green flag dropped in the BMW Endurance Challenge, a four-hour sports-car race, Aurora Straus ’22 was seated in the corner of a conference room stage at Daytona International Speedway, giving a PowerPoint on her laptop to Girl Scout Troop 2031.

She explained friction, engineering, and aerodynamics, and talked about how the BMW M4 GT4, the car she was driving in her first race of the season, was outfitted with special brakes and tires so she could drive both faster and safer. Then she took questions:

How much time do you have to get out of the car in the pit? (Ten seconds.) Does the car have turn signals? (Yes, but she almost never uses them.) Does the GS sticker on her car stands for Girl Scouts? (Unfortunately, no.)

“It’s great to show them something they are not exposed to very often,” said Katie Kennedy, co-leader of the nearby Melbourne troop. “A lot of these girls haven’t been to a race, so she’s a great role model.”

Bella Koch, a 10-year-old with a giant white bow in her hair, was impressed. “She let us get in her car, and I like that she’s trying to make more girls drivers.”

For Straus, the visit was critical to why she even gets in a car.

“My long-term goal with racing is to use it as a platform for Girls With Drive,” she said, referring to the nonprofit she founded in 2018. “What sold me on staying in racing was the young girls who came to watch me at the track. I amassed a small following, and they would drive from racetrack to racetrack and I realized I accidentally have an effect on girls. If I didn’t do this, who would be here for these girls?”

“With Harvard, it’s low stakes in a really beautiful way. If I turn something in late or get a B instead of an A, that won’t affect me for the rest of my life.”
— Aurora Straus

Two hours later, Straus was on the track, driving 175 mph with her race partner, NASCAR’s Kaz Grala. Straus arrived in Daytona with her own trophies and accolades, notably that in 2018 she finished second in her class in the Pirelli World Challenge and was 2017’s top-finishing rookie in the International Motor Sports Association’s ST class.

“Her sheer drive to win and race is amazing,” said fan Jason Hildreth, 43, from Washington, D.C. “Outside of a few women, there’s no one better than her.”

In the days leading up to the late-January race, Straus took command of all aspects of the preparations: poring over data with Grala and her coach, Nick Longhi; taking her racing suit to the onsite seamstress to have sponsor patches sewn on; walking the track to feel changes in the course; and testing the car. Their team included the two racers, two engineers, and seven or eight crew members.

“I go over as many laps in my head as I can,” she said, even as she joked: “My job is going around in circles.”

Born into the racing world in Cold Spring, N.Y., where her father put her in a manual-transmission car at age 13, Straus felt an instant connection with the road.

“I could immediately picture myself racing other people,” she said. “The part that fuels me is the competition. When I told my dad I was serious about it, he said, ‘You have to raise sponsorship money to do this,’ so I had to learn to market myself. I ran in my first semi-professional race at 16.”

At Daytona, Straus sported a six-figure carbon Richard Mille watch as part of the Swiss company’s sponsorship. But the glamor of wearing the luxury timepiece doesn’t offset the pressure that comes with being a brand.

“Two percent of racing is getting behind the wheel. Ninety-eight percent is raising money with sponsors, testing the car, signing with a team,” she said. “It’s all time-consuming. It’s thousands of hours of work for a race that at any point could go badly. In racing, you don’t have the privilege to try things twice. You have one option and the stakes are extremely high. If you do badly, you’ve wasted tens or hundreds of thousands of dollars.”

Straus balances this intensity with a maturity few have at her age, according to Longhi. “The ability to do this type of racing is not common currency,” he said. “Aurora’s very calm, cool, polite, and a team player. She can concentrate, and it’s pandemonium driving 175, having to talk on the radio, come into the pit. It’s a matter of seconds and inches all the time. Her ability to learn is off the charts. She’s not a prima donna and everybody sees that. Every team we’ve been on has loved her. Her personality lends itself to what you need in this type of racing. You need the team to want to kill for you. She’s going to run the world.”

Straus’ post-racing plans may align with her coach’s prediction.

“I want to be president; I’m not opposed to the idea,” said the 20-year-old, who has a joint concentration in government and history and literature, with a secondary in astrophysics. “Racing has given me years of work experience. I’ve walked away from deals undervaluing me, and this sport is dependent on relationship-building and being strategic in moments when you have to swallow your thoughts and defuse tense situations.”

Living a dual life as both race-car driver and Harvard student has also given Straus a unique perspective as one who straddles fiercely opposing strongholds in a politically divided country.

“It’s been an interesting moment of growth for me,” she said. “Harvard is a wonderful place to share your ideas, but it can also be an echo chamber if you put yourself in the wrong situations. I’ve found myself having conversations saying, ‘I know you think conservative candidate X is horrible,’ but I would challenge them to think their candidate is failing to reach out to the majority of my friends. I’ve been immersed in a conservative world [racing] the last few years, and I’ve stood out. I’ve had conversations with one of my former mechanics who felt the political system wasn’t working for him. He has two sons in college, taxes keep going up. He was maybe voting for a change of pace, and that’s a lot of racing fans.”

Competing in 10 to 15 races a year made her first-year experience a delicate balance that she has sometimes struggled to maintain.

“It’s hard to compartmentalize when both commitments are full-time,” she said. “But with Harvard, it’s low stakes in a really beautiful way. If I turn something in late or get a B instead of an A, that won’t affect me for the rest of my life. My friends are getting stressed on midterms and I’m OK.”

The physical demands of endurance racing require daily training. She likens her races to running on a treadmill in a sauna (the cockpit reaches upwards of 130 degrees).

“You want to be as lean as possible. You want to have the least amount of mass possible given the amount of muscle needed,” she said. “Over an hour, I’ll lose three or four pounds, so in doing one- to three-hour stints, your body needs to be comfortable losing over 10 pounds of water.”

But the physical challenge is a Sunday drive compared to the steely mindset Straus needs at all times. She is often described as “cute,” regularly mistaken for being a publicist or the wife of a male driver, and is routinely asked, “How is your mom OK with this?”

“No one is asking the male racers that question,” she said.

She bristles more at those who call her “intense.”

“Everyone has called me intense with that bad connotation, like, ‘You won’t smile.’ I’m proud that I’m intense. I’m not going to apologize for that. You can’t work to your limit and grow unless you are a little intense. It’s such a stupid stereotypical trope,” she said.

At Daytona, Grala had a minor accident, but Straus’ BMW and BimmerWorld Racing team got the car back on the track and she raced the second-fastest lap of any BMW competitor.

“Part of the joy is in the competition,” she said. “Most pro drivers are within a tenth of second from each other, so I’m constantly learning about pushing those limits and sometimes passing them. Can I break late or can I take this turn a little faster? You can never stop improving, and that’s dynamic.” 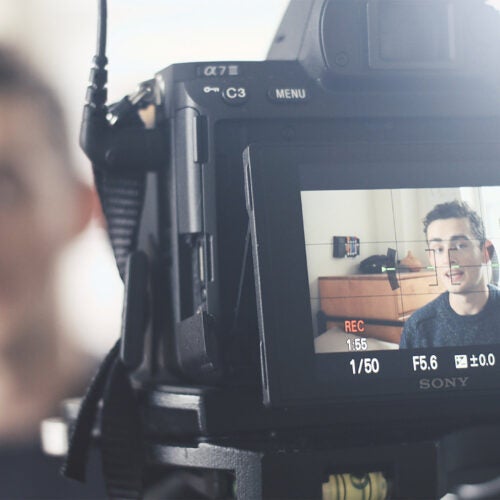 Behind the camera with sophomore — and YouTube influencer — John Fish 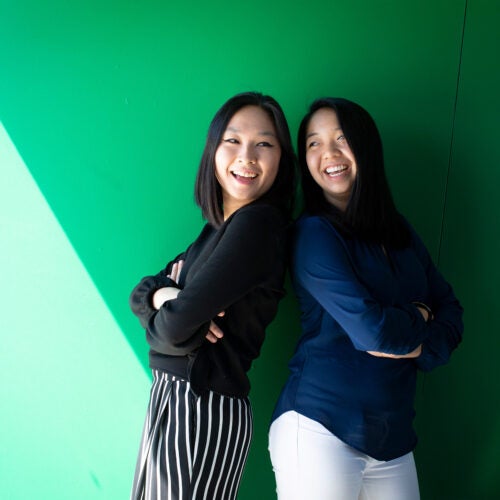 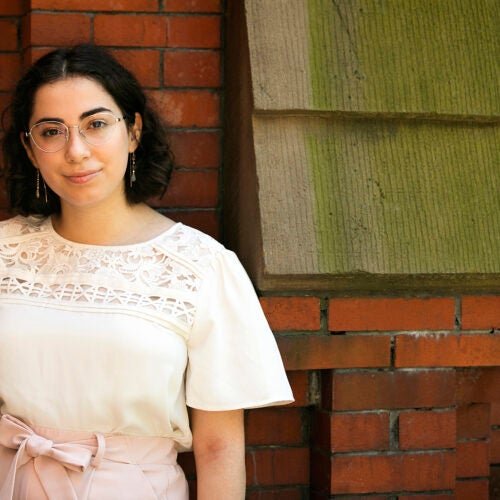 When her life is over, she’ll have lived

Courage, sadness, and compassion have all shaped senior Elsie Tellier’s response to her lethal disease. But not bitterness. 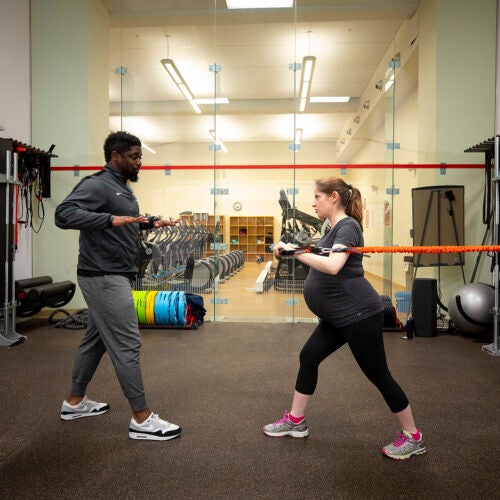