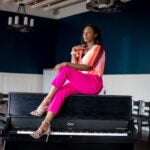 Getting to know someone is a lot easier when you accidentally get her mail and emails, her W-9s, and her graded essays for four years. Such is the story of mistaken identity that the two graduating Catherine Zhangs have experienced in their time as undergrads. They have been confused with each other by department interns, preceptors, and even two deans. Their story results from the quirky coincidence of having the same name — both Cat, for short — but the women leave campus with a friendship of deep respect and admiration, each having made an important impact on the College community.

“Cat is probably the prime example of showing how one person can make a ripple effect on campus,” said Zhang, the former Undergraduate Council president who hails from Wexford, Pa., outside Pittsburgh. “It’s beautiful to see how impactful and far reaching her advocacy for equity and voice for justice has been and will continue to be.”

The Cat Zhang from Plano, Texas, a journalist and comedy writer, who served as editor-in-chief of Harvard’s satirical news publication Satire V, was equally complimentary about her namesake’s tireless effort to make tangible changes to campus life.

“From the moment she stepped on campus, we all knew she’d be our Undergraduate Council president. Cat has near universal appeal, but with real substance,” Texas Zhang said. “What she says, people take in good faith.”

Before the Zhangs ever met in person, they were virtual doppelgangers. Both members of their respective high schools’ speech and debate teams, they discovered their shared name on Facebook during their junior year when commenting on a mutual friend’s profile picture.

“She commented first and immediately I posted underneath, ‘oh my God,’” said Texas Zhang, whose friends call her “CATZHANG!” in one swoop.

Texas Zhang recalled first meeting Pittsburgh Zhang in person at the First-Year Outdoor Program on the steps of Widener Library.  “Organizers called out ‘Catherine Zhang’ and I walked up and said: ‘Which one?’”

“From the first day, we confused people. But if there’s anyone I would want to get confused with, it’s the other Catherine,” said Pittsburgh Zhang, who is sometimes known as Catty Z. “But honestly I’m here for the ‘Catherine Catherine’ content.”

Both retired from speech and debate once they came to campus. Pittsburgh Zhang, who concentrated in psychology with a secondary in educational studies, said her passion for relating to people served her well in student government.

“I had never done student government before, but I knew coming in that college was about trying new things. The campaigning process absolutely terrified me because I feared people would think I was not being genuine or that I had an ulterior motive. I just genuinely enjoy talking to people and hearing their stories — I love connecting to others,” she said.

She was elected to represent Ivy Yard as a resident of Straus Hall in the Undergraduate Council, and worked as a first-year representative to put laundry machines in Matthews and game tables in Thayer and Wigglesworth.

“I loved the idea that we could individually and collectively do something to make our campus better and our community stronger. That is the whole idea of service,” Pittsburgh Zhang said.

During the fall of 2017, she successfully campaigned for the Undergraduate Council presidency, calling the process “to date, the hardest thing I’ve done.”

“Our time at Harvard is shaping in so many ways, and we are constantly learning, growing, and changing. If I could help even one person deeply, that was enough to make me think I would regret it if I didn’t try,” she recalled.

Her administration enacted policy that ensured free menstrual products would be available across campus, and established Educational Studies as a secondary field (she is part of the first graduating class). She now serves as First Class Marshall for the Class of 2019, and will teach English next year on a Fulbright in Taiwan.

“Through leadership on campus, I learned how to be a ‘warm demander,’” she said. “It is about setting high expectations with love and the wholehearted belief in the growth of people. It’s been the impetus for me to go into the classroom.”

Leading at Harvard became a cornerstone as well for Texas Zhang, who concentrated in social studies and served at Satire V. She described her time there — as likely the first woman of color to lead the publication — along with her role as head writer for the sketch comedy group On Harvard Time as “the most formative experience of my life. I learned so much about how to be a leader, friend, and person.

“When Catherine and I were leading our respective organizations, we were constantly reflecting on how to push our institutions toward progress without being seen as unnecessarily alienating or polarizing. The question is: How do you stay empathetic and attuned to concerns from all over the ideological spectrum while still committing to ambitious, concrete change on matters of representation, inclusion, and accessibility,” said Texas Zhang.

“My advocacy bent comes from developing so much granular knowledge about how the arts on campus works, via friends or my own personal experiences, and using that knowledge to encourage leaders of exclusive groups to reform their comps, initiations, and culture,” she continued.

In February, Texas Zhang posted an essay on Facebook criticizing the initiation process and internal culture at the Harvard Lampoon. It was an effort to start a series of sustained conversations with members of several arts groups, including The Signet Society and The Advocate, about reform. The Lampoon piece went viral among the student body.

“There are so many subtle and overt hurdles to improving our culture,” she said. “Transparency is the most important thing in changing things.”

The attention reignited the mistaken identity for Pittsburgh Zhang, who said she was never happier to share her name with her Texas counterpart.

“Many people responded to her articles and emailed or messaged me as the mixed-up Cat,” she said. “It was huge and I’m grateful for her writing it. It goes to show how much she has touched the arts scene. It’s hard to change things on campus, especially when we’re such an old institution and you don’t see many Asian women in this field.”

Texas Zhang, who previously interned at NPR Music and now works as an editorial assistant for Boston Review, hopes to forge a writing and art criticism career. Likely to be on different continents come fall, the two Zhangs said they will miss their alter ego.

Said Texas Zhang: “Regardless of whether we get mixed up in the future, I’m sure we’ll keep in touch.”