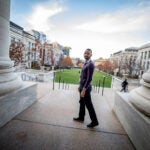 A rise through the ranks

Behind the camera with sophomore — and YouTube influencer — John Fish

John Fish ’21 started his YouTube channel as part of a technology communications class during his senior year of high school in Waterloo, Ontario. Coincidentally, it was up and running around the time he got into Harvard, so he arrived to campus with 1,000 followers.

“I thought of documenting coming to Harvard, this mysterious process that so many people are interested in,” he recalled. “No one had done that before. It started as daily vlogs, which were pretty bad.”

But today Fish is a bona fide YouTube star, a self-help motivational guru with a subscriber base of 500,000 and counting. In his room in Dunster House hangs a framed silver “play” button, a gift from the company when he hit 100,000 subscribers (he will get a gold one if he hits 1 million). A self-described “pseudo-celebrity,” Fish, who is concentrating in computer science, uses personal experiences to inform his content with the goal of helping people who will never set foot on Harvard’s campus.

“I’m here because of privilege and luck,” he said. “Anything I can do to democratize that into sharing messages is meaningful to me. I never say. ‘This is what you should do.’ I’m 19 so the amount I know about the world is tiny. But I have such rich experiences and I can say, ‘Here’s what I’m trying.’ These ideas allow people to feel more comfortable in changing their lives.”

That’s why his most popular videos are “Why My 4.0 at Harvard Was a Failure,” “A Day in the Life of a Harvard Computer Science Student” and “Reading a Book a Week is Changing My Life.” Fewer clicks, but just as powerful topics: “Mental Health Perspectives from a Harvard Student,” “How I’m Breaking Bad Habits and Forming Good Ones,” and “The Meaning of Life.”

“People have this perception of Ivy League students, that they are invulnerable,” he said. “School stresses me out a ton, but mentors have eased that stress for me. I could talk to any one of a number of people, but so many people don’t have those people to talk to. If I can be someone who can help normalize it, that’s a good thing.”

“I’m here because of privilege and luck. Anything I can do to democratize that into sharing messages is meaningful to me.”
— John Fish, pictured above

“John stands out as an unusually perceptive student, hungry to learn, but also humble and generous in his willingness to share with his peers and others,” Dingman said.

Fish makes his videos largely by trial and error. He films in environments where he can easily control his surroundings and restrictions are few (i.e., his dorm). He works with a script, but always with the plan to veer off so the message sounds more natural. He sells daily planners called Growth Books on Amazon to pay College expenses, and while he acknowledges that metrics make advertisers happy, he gets validation from the direct messages sent by fans across the globe on social media.

Said @Biffi: “You’re being a great help in my academic life, thank you … The insights from your videos are invaluable, the last one was awesome.”

Another, @ryanestrella, commented on Instagram: “Your videos are helping me out while in a period where I am in dire need for advice and guidance!”

Fish said Harvard has provided both the intellectual rigor and varied perspectives to improve himself and his videos.

“My friends who attend school back home have courses dictated to them,” he said. “Here a lot of the most impactful classes I’ve taken — Zen Buddhism, and The Psychology of Success and Failure, for example — are a diversity of information and ideas I want to pursue. If I don’t expose myself, I might as well as have gone to another university. There are so many interesting, cool people here that it creates a level of comfort. You can take a risk and it won’t be weird because other people are taking risks too. You’re fitting in.”