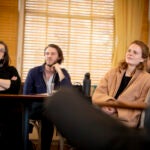 Stories get an A+

Growing up, Julia Riew ’21 dreamed of writing musicals. She looked for inspiration in her favorite Broadway productions, but couldn’t find many stories on the stage to which she could relate.

“Most shows on Broadway are about underdog white guys who go on adventures. That was the show I was trying to write, and it didn’t really work,” said Riew, who is pursuing a joint concentration in history of science and Theater, Dance & Media. “I never considered telling a story about myself because that isn’t the kind of show I had seen before.”

Last year, Riew decided to change that approach. The result is “The East Side,” a student-produced musical about cultural authenticity, gentrification, and dumplings. Riew co-wrote the book with John Lim ’20 and Emerson College senior Jared Leong, and serves as co-music director with Ian Chan ’22.

“The East Side,” at Farkas Hall from Thursday through Sunday, follows Ryan, a Chinese American teenager working at his family’s restaurant in New York City’s Chinatown and getting ready to leave for college. As the neighborhood changes around them, Ryan and his family must adapt their recipes to the tastes of their new neighbors, or face impending bankruptcy.

“We wanted to make the show funny and upbeat, so it could be enjoyed by everyone,” added Riew. “But it also has a special meaning and certain jokes that will hit close to home for a lot of people.”

“The East Side” is the first production mounted by Asian Student Arts Project (ASAP), a new pan-Asian organization on campus. Since its establishment in October, the group has started an online community, hosted a fall open mic night, and co-presented a songwriting workshop with composer, lyricist, and librettist Timothy Huang through the Office for the Arts.

The arts project formed when Riew and Eric Cheng ’20 met at the Common Casting Pizza Q, an information session about campus theater hosted by the Harvard-Radcliffe Dramatic Club, and decided to join forces.

“We wanted to start [a group] because there wasn’t a place to make art and have conversations about representation on campus for pan-Asian people,” said project co-president Cheng, who is studying economics and mind, brain, and behavior. “We wanted to aim high.”

“ASAP is for everyone who is interested in issues of representation in the arts,” added Riew, the other co-president. “It’s a space to try new things.”

When it came time to cast the show, the team opened auditions to anyone interested, regardless of experience. More than 50 students tried out, many of them first-time performers; only four out of the 12 selected cast members had participated in a prior Harvard production. Director KeeHup Yong ’19 had performed at Harvard and had experience in film and photography, but had never directed a stage show before. He took on the task because of the material.

“For me, ‘The East Side’ is about giving character choices to actors and characters in the show about how they want to be represented, and showcasing that diversity and inclusion,” said Yong, who is concentrating in psychology. “There aren’t many TV shows and plays that feature Asian characters making decisions about what happens in a story, but our show is about giving hope and opportunity to actors and characters.”

Yong’s attachment to “The East Side” was informed by his own childhood experiences working in his family’s restaurant in Kentucky. Some of his anecdotes from life at the restaurant ended up in the final script, like a comedic scene in which Ryan’s mother asks him to taste part of a new recipe that turns out to be pure wasabi powder.

“It has been really nice to work on something so personal, and to have the ability to work with the people who made the musical is a rare and unique experience,” Yong said. “This was a chance to create a pan-Asian story of representation, inclusivity, and diversity written by people who care.”

As the group celebrates its first year, its leaders is looking for ways to build community on campus and in the arts industry.

“With ASAP, we now have a platform to create art and talk about representation, and … a place where people can express themselves artistically and maybe be inspired to do this professionally,” said Cheng. “ASAP is about giving an opportunity to students and hopefully starting a legacy that pushes pan-Asian artists forward and allows this [representation] to become normalized.”

Tickets to “The East Side” are free and available online. 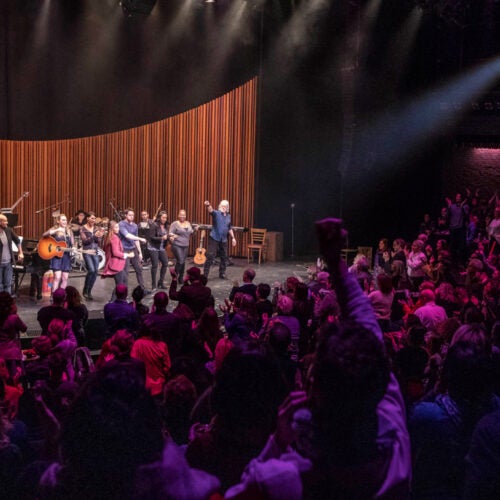 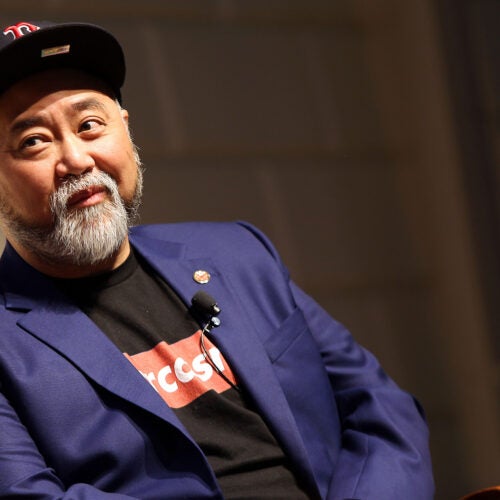