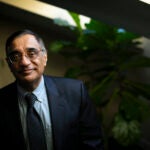 Harvard ponders its symbols and spaces

For Elle Shaheen ’21, being part of the first group of women cast in a Hasty Pudding Theatricals production felt like getting accepted into Harvard a second time.

“It sparked that exact same feeling of utter excitement, joy, and relief after lots of intensely hard work,” said the sophomore from Portsmouth, N.H., who is studying Theater, Dance & Media.

This year marked the first in the group’s 171-year history that women took the stage as part of the Hasty Pudding cast. Six men and six women make up this year’s onstage talent in the original student musical “France France Revolution!” The group performs on campus through March 10 before taking the show to New York City March 15 and 16 and to Bermuda for three spring break shows.

“The talent is through the roof,” said first-time director Larry Sousa, who cast male performers to play roles of both genders and women to do the same.

“France France Revolution!” tells the love story of a butcher and a princess who meet during the February Revolution of 1848. Ashley LaLonde ’20 plays the leading role of ingénue Theresa Sparkinme.

“It’s historic and I think the quality of the show is top-notch,” said LaLonde, who acts professionally and has done five shows at the American Repertory Theater in the past two years. “It’s so cool to be part of literally the oldest theater group in the country and to be part of a show that has a huge legacy. I feel so lucky to be one of the first women. It’s a very special moment in history.”

LaLonde earned the honor of being the first woman to sing the show-stopping Act II number called “Head of Heels,” a ballad that’s the turning point in the show.

“It’s incredible to have a professional opportunity for collegiate performing artists that mirrors the professional world,” she said. “For me, that’s one of the most exciting aspects of being part of the cast.”

Women have been behind the scenes at the Pudding in the past, including actress Rashida Jones and comedy writer Megan Amram (“The Good Place”). Laura Sky Herman ’19, Shirley Chen ’22, Annabel O’Hagan ’19, and Celia Kenney ’20 comprise the rest of this year’s female cast. Shaheen said the Pudding pace is intense, with the show coming together in only three weeks of daily daylong rehearsals and songs being added just days before opening night.

“It’s an extraordinary group of women and everyone in the company, male and female, has been extremely supportive,” she said. “To feel that everyone is so excited we’re here, we all feel incredibly grateful that we get to be a part of it.”

The Leverett House resident auditioned in 2017 as a form of protest of the group’s exclusion of women. “I went in knowing full well that I wasn’t going to get it,” she said, “but [I wanted] to show them that there was this incredible range of talent that they were ignoring. When they announced that they would cast women at the [2018] Woman of the Year, I called my mom in tears and said, ‘I have to be part of that.’ I prepared for it almost every day since.”

Shaheen is particularly pleased to be playing an evil Russian prince named Emmanuel Haftamarry. “When I found out I got to play a man,” she said, “it felt even cooler, in some ways — that idea that women can play men on stage like men can play women and that women can be very comical and funny.”

To purchase tickets to the Hasty Pudding Theatricals’ 171st production, “France France Revolution,” contact the HPT Box Office at 617-495-5205 or order online at www.hastypudding.org/buy-tickets. The show will be performed at Harvard University’s historic Farkas Hall at 12 Holyoke St. through March 10. The company then travels to New York to perform at The Kaye Playhouse at Hunter College on March 15 and 16. Call 212-772-4448 for tickets. It will perform March 20-22 at Hamilton City Hall in Bermuda.