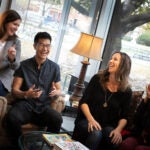 Audiences know the stories of their favorite musicals. Often, as in the case of productions like “Jagged Little Pill” that tap into popular tunes, they know the songs from the radio. But in “ExtraOrdinary,” a cabaret-style retrospective at the American Repertory Theater (A.R.T.), they not only hear songs previously performed on the Cambridge stage — in productions like “Pippin,” “The Gershwins’ Porgy and Bess,” and “Waitress” — they hear the performers’ own stories too.

The show, under the direction of Diane Paulus and with music directed by Lance Horne, celebrates and revisits the 10 years of musicals and music theater that Paulus has shepherded through the Harvard institution.

“I’ve always been passionate about the power of musical theater because I feel it can reach audiences in a way that builds bridges,” said Paulus, the A.R.T.’s Terrie and Bradley Bloom Artistic Director.

She distinguishes between classic musicals and “music theater,” in which tunes are added or integrated into a play. Both, as well as opera, have found a place at the A.R.T. under her direction, “expanding the boundaries of theater, which is our mission, through newly reimagined productions of classic musicals and creating conditions for new musicals.”

Of course, what exactly music or musical theater is can be up for debate, a subject that cast members discuss and sing about in this production. “Shakespeare is music,” Paulus said, suggesting that all theater may be regarded as musical. “We’re talking about live sound,” she said, “rhythm and vibration.”

“It’s always about creating conditions where collaborations are born. I think this reunion is going to do that.”
— Diane Paulus

She explicitly rejects the idea that musicals are less serious than straight dramas. “Musicals can be serious entertainment,” she said. “If you look at the history of musical theater, if you look at some of the early book musicals like ‘Oklahoma,’ these are dealing with really intense topics.” In addition, “The musical is a signature American art form. And we are the American Repertory Theater.”

While this production brings back the songs that audiences may remember through the years, it adds a fresh element: the seven performers (plus guests) explaining why these pieces touched them, or how they came to a particular production.

Before Matthew James Thomas, from the 2012 production of “Pippin,” performs “Corner of the Sky,” for example, he recalls resisting the song, which has become part of the musical theater canon. He had resisted despite the urging of his vocal coach — until he found himself auditioning for the part. Brandon Michael Nase, from the 2018 production of “The Black Clown,” talks about his journey from musical educator to performer. These and other returning cast members are being joined by guests who appear on limited dates, such as Gavin Creel (Nov. 27‒30), Carolee Carmello (Nov. 29), and Elizabeth Stanley (Nov. 30). The show runs through Nov. 30.

The performers’ personal recollections reinforce the impact of what is already an emotional art form. “Literally, musical theater is about the moment when you can no longer speak and you have to sing,” said Paulus.

While this production is, by its nature, a retrospective, Paulus sees in it the seeds of future productions. “I’ve always wanted the A.R.T. to feel like an artistic home for artists,” she said. “It’s always about creating conditions where collaborations are born. I think this reunion is going to do that. You’re going to see shows where the story is, ‘I came back to A.R.T. for that show … and that’s where the idea was born.’ ”

This production is hardly meant as the last word on musicals, or the A.R.T. “Our season ends with a world premiere of a new musical [“We Live in Cairo”] about the Arab Spring,” Paulus said. “ExtraOrdinary” is “kind of looking backward,” she acknowledged, “but the last show of the season is looking forward.”