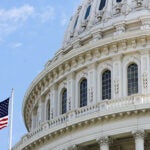 Memo to America: Not everyone wants to be like you

Each party has reasons to crow, as D.C. power realigns, analysts say

Partisans hoping to proclaim victory after Tuesday’s midterm elections got their wish: Democrats racked up enough wins to seize control of the House of Representatives in January for the first time since 2010, while Republicans added at least two seats to what was a slim advantage in the Senate.

That means it’ll be business as usual in the Senate, with Sen. Mitch McConnell (R.-Ky.) remaining as majority leader, but a major realignment in the House, with Rep. Nancy Pelosi (D-Calif.) expected to return to her perch as speaker, with Democrats running the committees.

Though voters elected a record number of women, including many first-time candidates, both parties also took some hits to the chin, as rising Democratic stars Andrew Gillum and Beto O’Rourke lost, along with Senators Heidi Heitkamp (D-N.D.) and Claire McCaskill (D-Mo.). In the GOP, some Trump supporters lost their races, including Wisconsin Gov. Scott Walker, Kansas Gov. hopeful Kris Kobach, Sen. Dean Heller of Nevada, and Congressman Dave Brat of Virginia.

To gain a sense of how the election played out and what the results may mean going forward, the Gazette interviewed Harvard faculty members who study political history (Alex Keyssar, the Matthew W. Stirling Jr. Professor of History and Social Policy at Harvard Kennedy School), government (Steven Levitsky, professor of government), race and political economy (Maya Sen, associate professor of public policy at the Kennedy School), and election law (Guy-Uriel Charles, Bennett Boskey Visiting Professor of Law at Harvard Law School). Below, they evaluate the results and what those may herald for the 2020 presidential race.

GAZETTE: What surprised you the most about this election?

alex keyssar: Several things strike me about the election results. One, overall there were relatively few surprises. The results in the House and the Senate were in line with what had been predicted for many months. Yes, of course, there were surprises in individual races, but the patterns were not a surprise. Two, the results bring home the significance of gerrymandering in the House (the Democrats appear to have had to win the popular vote for the House by about 9 percent to get a narrow majority of seats), as well as the significance of the structural malapportionment represented by the Senate. Democratic Senate candidates received more votes than Republicans, but they lost seats. Three, it appears that turnout was relatively high, but still below 50 percent. That is a significant fact. Four, the most important single outcome in this election may prove to be the passage of a proposition in Florida that will restore voting rights to ex-felons. That will affect all future elections in Florida, and it was achieved through remarkable grassroots organizing.

MAYA SEN: I was surprised that the urban-rural divide continues to be so predictive of electoral results, with urban places voting overwhelmingly for Democrats and rural areas voting overwhelmingly for Republicans. This particular pattern will be interesting to watch moving forward. The broader American system of government really isn’t built to withstand partisan cleavages mapping onto geographical cleavages so cleanly, and so persistently. After all, the federalist system — and in particular the structure of the Senate — give an unequal representation to states that have smaller populations. And if these states systematically and persistently vote differently from the rest of the country, it will create some political instability and resentment among those living in more populous areas, whose partisan and policy interests will be underrepresented.

Guy-uriel charles: I was surprised and pleased that voters in Florida opted to restore voting rights to ex-felons who have completed their sentences. In fact, there was additional good news as voters in Michigan and Nevada decided to make voting easier in their states by adopting same-day registration and registering voters when they obtain or renew their drivers’ licenses.

Steven Levitsky: I think what’s most striking is the crystallization of partisanship. Increasingly, Republicans win red states, Democrats win blue states, states where the distribution of partisanship favors one or the other. Massachusetts, of course, was a huge outlier in that Charlie Baker (’79) won easily despite this being an overwhelmingly Democratic state. But Massachusetts’ governor’s race is a real exception. For places like Missouri or Montana, eventually, if it’s a Republican state, opponents can’t win, and that’s something unusual. More and more, partisanship is what’s defining elections, not campaigns, not economic issues — those things matter — but it’s partisanship that’s defining elections, much more than 20, 30 years ago.

GAZETTE: What do we know about the American electorate now that we didn’t know Monday?

charles: I think we can say that voters increasingly care about the widespread availability and accessibility of the right to vote. Voters in Missouri, Colorado, and Michigan all passed measures that will make it harder to gerrymander electoral districts. 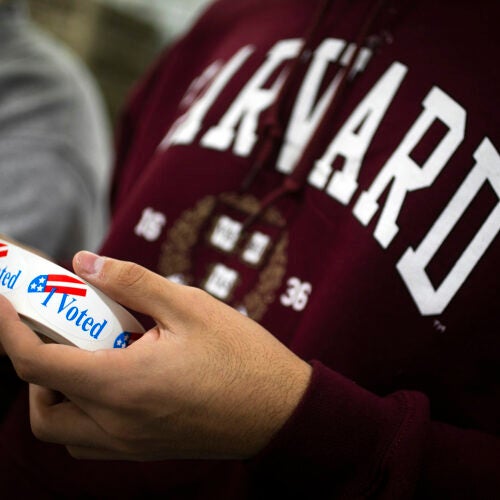 The election just ahead

A look at three local efforts to safeguard and understand the voting, while encouraging participation 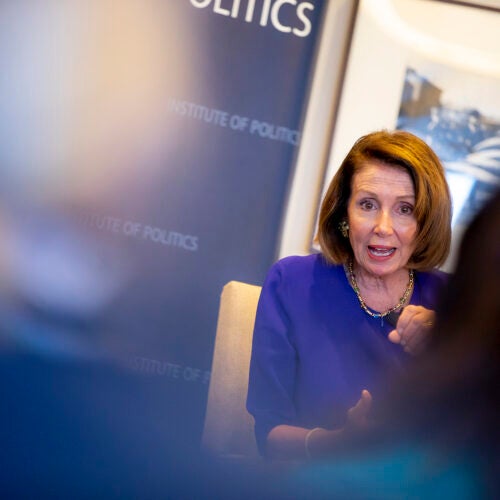 During Harvard appearance, she calls for a return to bipartisanship

sen: I’ve been surprised by the enthusiasm and passion on both sides. I expected that strong anti-Trump anger would motivate the Democrats’ base to turn out to vote in large numbers, but it was surprising to see the fervor and affirmative excitement among Trump’s own supporters. I think we have a sense that the 2020 presidential election will be similarly emotional on both sides, with extremely high voter turnout and passion. I think we can also expect that very few people will be persuadable.

Separately, it is still too early to say whether explicitly racial appeals worked (or did not work) for conservative politicians. Scholars will be investigating this in the years to come, but it seems like the preliminary answer is that racial appeals (including explicitly racist appeals, which were previously very rare) no longer seem to derail candidacies nor deter significant numbers of voters.

GAZETTE: How does it change our sense of what’s at stake in the 2020 presidential election?

Levitsky: I think Trump got some good news for 2020, and Republicans still performed really well in some critical swing states. Florida and Ohio immediately come to mind. Not overwhelmingly good news in that much of the upper Midwest seemed to swing back to Democrats, but in the key states of Ohio and Florida, the Republican Party continued to do quite well, and that bodes very well for Trump in the Electoral College.

sen: The Democrats’ control over the House will change the political narrative surrounding investigations into the Trump White House somewhat, significantly emboldening the president’s detractors and enabling new and deeper lines of investigation. At the same time, however, the Republicans hadn’t been very successful in the past two years in actually implementing significant policy changes. That’s extremely unlikely to change with the Democrats controlling the House. For that reason, I think we can expect continued policy gridlock, with an additional element of partisan conflict by way of Democratic-led House investigations into the Trump administration.

Somewhat more long-term, it will be very interesting to watch the careers of these young progressives who have been elected, particularly women, people of color, and those who are openly LGBTQ. It is an exciting time to see such impressive numbers of women be elected, for example. I should note, though, that the U.S. (with the new House numbers putting the share of seats held by women at around 22 percent) will still lag behind European peers in the share of women in national legislatures (around 28 percent). So there’s still room for improvement here.

charles: I don’t think this election changes our sense of the stakes for 2020. That is a presidential election year, and the stakes could not be higher.

GAZETTE: What should we be looking for as we head into the run-up to 2020?

sen: Probably the most important ramification is the Republicans’ continued control of the Senate in terms of what that means for the federal courts (in particular for the U.S. Supreme Court). The president and the Senate together make appointments to the federal courts. With the Senate remaining safely in Republican hands, President Trump will have a continued green light to continue to shape the courts by appointing extremely conservative judges, without needing to compromise at all in terms of ideology. In this sense, we can expect that Republicans will “hold onto” the courts for some time to come, appointing young, extremely conservative judges who oppose protections of minority and LGBT groups, who will be against expansive readings of reproductive rights, and who will be hesitant to involve themselves in gerrymandering controversies.

In addition, with several liberal Supreme Court justices aging (Ruth Bader Ginsburg is 85, Stephen Breyer is 80), Republicans might be in a position in the next two years to appoint another extremely conservative judge like Brett Kavanaugh or Neil Gorsuch to the court. This is an excellent position for Republicans, and they will reap the electoral and policy rewards of this for a generation.

GAZETTE: How do you think this election will be talked about decades from now?

Levitsky: This is clearly not a decisive or defining election in terms of electoral shifts and trends. It’s in many ways similar to the last couple of elections. It’s not a dramatic departure or realignment in either direction. There’s much more continuity than change. This is a really important election, in the context in which we have a president with authoritarian instincts and a proclivity to concentrate and abuse power, and a Republican Party that was increasingly abdicating its oversight responsibilities. What is really important is that the opposition won control of the House. That’s going to dramatically change the dynamics of American politics. The House, rather than engaging in oversight of the Trump administration, was essentially serving as a legislative shield for the Trump administration. That will change dramatically. Now, the Trump administration didn’t get a heck of a lot done legislatively anyway, despite the fact that it controlled both houses of Congress. But now I think we’re headed probably for almost total legislative stalemate and paralysis.

Impeachment continues to be an option of last resort for the Democrats, as it should be. But they will engage in oversight. They’ve got a long list of areas of potential abuse of power in which the Democrats can exercise an effective checking of Trump’s power. You may see some interesting legislation come out of the House in terms of protecting or advancing voter rights. I think that’s increasingly going to be a big issue dividing Democrats and Republicans, and probably will be a winning issue for Democrats. But what we may also see is Trump’s increased use of executive orders given that it will be more difficult to get legislation through Congress, maybe quite dramatically — which, unfortunately, President Barack Obama really set a precedent for.

These interviews were lightly edited for clarity and length.