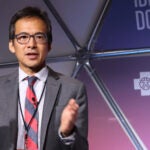 During Harvard appearance, she calls for a return to bipartisanship

At the moment, the question isn’t whether Democrats are going to retake the U.S. House in the midterm elections three weeks from now, House minority leader Nancy Pelosi said at Harvard Kennedy School on Tuesday. The question is how big the margin will be, whether it will be “a wave or a tsunami.”

Pelosi was in an upbeat mood, there to inspire students to get politically involved. She said a few times that, “We don’t agonize, we organize.” Her talk was moderated by Mark D. Gearan ’78, director of the School’s Institute of Politics, and was introduced with a surprise appearance by former U.S. Ambassador to Japan Caroline Kennedy ’80.

Calling Pelosi “one of the people I most admire in the world,” Kennedy cited the influence of her father, John F.  Kennedy, on Pelosi. “As a young teenage girl in 1960, she fell in love with JFK.  And today she understands what makes women enter politics — the health, safety, and environment of the world our children are growing up in.” Citing Pelosi’s work to pass the Affordable Care Act, Kennedy said, “It’s no secret that the reason she is the No. 1 target for Republicans is that she is so effective.”

Pelosi responded by recalling her own youthful epiphany when she attended JFK’s inauguration in 1961. “I was there as a student, and the excellence of his agenda was an inspiration to the world. And I can see a connection with all the college-age students here. To see his legacy continue to flourish and grow, and to see that in all your faces, is something miraculous.”

She also emphasized the need to restore bipartisan cooperation to government, saying, “I don’t think anyone going into public service would be saying, ‘I am here to divide.’ But there is a certain kind of thinking out there that we need to dispel.”

If the Democrats do retake the House majority, Gearan asked Pelosi what the agenda for the first 100 days might be. “I want campaign finance reform to be HR1, the first resolution of our Congress,” she said, and went down a list of other goals, including “lowering the cost of health care, raising the paycheck by building the infrastructure of America, and building it in a new green way. The climate piece will be an important part.

“And there are two things that the Republicans didn’t do, that we will now ask them to do. One is protecting the DREAMers [young immigrants granted legal status by the Development, Relief, and Education for Alien Minors Act], and the second would be common-sense background checks to cover gun violence. And one more thing would be expanding the Equality Act to cover discrimination against LGBTQ people and women, adding that to civil rights.”

Noting that her agenda sounds ambitious, Gearan asked if President Trump would be likely to get on board. “Even if he pivots and says ‘Yes, I am engaging now,’ can you really trust in those conversations?” Responded Pelosi, “The fact that we’ll have the majority will make a big difference in whether we can trust what he has to say. But I believe we can find common ground.”

One student asked about the president’s proposed border wall. Though the student was a Democrat, he noted that there were quite a few Republicans in his Philadelphia family, and they wanted to see the wall built, so what would Pelosi be willing to trade if the wall went through? “Nothing,” she responded, and invoked President Ronald Reagan’s warning that closing off immigration would cost America its pre-eminence in the world.

“We do need to guard our borders, and we do need to have immigration reform, but the wall is not the way to go,” she said. “It is immoral, expensive, ineffective, and not what people do between countries. But it has become a manhood thing for the president.”

Finally, she revealed a piece of news that hadn’t hit the media yet. She just filed a Freedom of Information Act request for the details of the FBI’s investigation of Brett Kavanaugh, now confirmed to the U.S. Supreme Court, to be made public. The FBI has three weeks to respond to her request. She argued that if the details of the 2016 investigation of Hillary Clinton’s email files were made public, these need to be known as well.