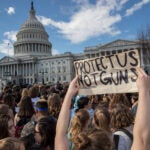 In the late 1980s David Brooks was reporting from Europe for The Wall Street Journal as a wave of reform swept the world. Across five years he would cover the fall of Berlin Wall, the breakup of the Soviet Union, the Maastricht Treaty, Nelson Mandela’s release from prison, the end of apartheid, and the Oslo peace process.

It was “all good news,” Brooks said, except for the one story he mostly ignored: Civil war in Yugoslavia.

“In retrospect, that was the most important thing that happened while I was there because that led to what we’ve seen ever since, and that’s tribalism,” Brooks, now a columnist for The New York Times, told a Harvard audience on Wednesday.

The rise of tribalism in the U.S. was among Brooks’ topics during a talk at the Ash Center for Democratic Governance and Innovation. American tribalism and the appeal of President Trump, he said, owe largely to a shift from a community ethos to one of rugged and rebellious individualism.

There are pros and cons to both, Brooks said. From 1932 to 1964, community was central to a sense of self and connectedness, and citizens put faith in big organizations — government, unions, corporations — to solve big problems.

But if trust and “humility” were easier to find back then, Brooks said, so were rampant racism, sexism, and anti-Semitism, as well as more emotional distance in families, particularly between fathers and their children, and deeper conformity.

The 1960s, Brooks said, produced a turn from “we are in this together” to a “free to be myself” sense of liberation that charged a range of social movements, including for expanded Civil Rights. But now, decades later, the country is “suffering a lot of the effects of individualism,” he said. Brooks pointed specifically to three social chasms: loneliness and isolation; a distrust of institutions; and a crisis of purpose.

“What happens when you leave people naked and alone?” Brooks said. “Well, they do what anybody does with our revolutionary history — they revert to tribe.”

The Trump campaign understood that partisan conflict had shifted away from the size of government to a debate about the embrace or rejection of globalization. And he pounced. Deft with political theater, the future president “was good at exposing the holes of the old order … at picking every wound we have and sticking a red hot poker into it.”

Brooks sees a moderating influence in organizations focused on missions such as civic education, rebuilding community, social mobility, and a better understanding of what our American purpose is “around the world.” The country needs to develop a better understanding of “why living in a democratic society is a better way of life,” he added. Perhaps most important, Brooks said, is that we look outward from our tribes in a spirit of “I commit to you.”

Commitments, whether to a person or a profession, a community or a set of ideas, give us our identity, sense of purpose, higher definition of freedom, and moral character, Brooks said.

Commitment to nation is the biggest challenge facing the country, he said, but it’s not insurmountable. The journalist sees hope in strong communities “rallying to action.”