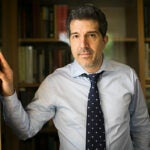 Wynton Marsalis returns to campus Oct. 30 for an evening celebrating the video release of “Music as Metaphor,” the lecture and performance that launched his Harvard lecture series in 2011. The event, “A Conversation with Wynton Marsalis and Drew Faust,” will explore the importance of the arts and cultural literacy in education, jazz, and society.

“Wynton Marsalis is a dynamic performer and an exceptional teacher,” said Faust, Harvard’s president. “His lectures and performances at Harvard have illuminated for our community the many ways in which the arts are fundamental to learning and understanding more about ourselves and the world around us. I am honored to welcome back a friend of Harvard for what I’m sure will be an engaging and educational evening.”

Faust and Marsalis will be joined at Sanders Theatre by Boylston Professor of Oratory and Rhetoric Jorie Graham, Cogan University Professor Stephen Greenblatt, visiting senior lecturer on music and Director of Jazz Ensembles Yosvany Terry, and members of the Harvard jazz community.

“Cultural literacy is an essential component of the liberal arts education,” said Marsalis. “It is my hope that making this lecture more widely accessible will further encourage educators to embrace the centrality of the arts in the learning process.”

The conversation will begin at 7 p.m. and will be live-streamed at harvard.edu/live.

Marsalis’ lecture series, “Hidden in Plain View: Meanings in American Music,” was sponsored by the Office of the President and Provost. The series launched in April 2011 before a capacity crowd with “Music as Metaphor,” an interpretation of the many unobserved symbols in American music and their illumination of the democratic process. It features performances by Marsalis alongside Walter Blanding, James Chirillo, Carlos Henriquez, Ali Jackson, Dan Nimmer, and Mark O’Connor. The series continued in September 2011 with the second lecture, “The Double Crossing of a Pair of Heels: The Dynamics of Social Dance and American Popular Musics,” which featured four dancing couples in a diversity of styles. The lecture addressed the cultural significance of changes in American social dance from the jig to the cakewalk, the turkey trot to the mambo, and the lindy hop and the twist.

His third lecture, “Meet Me at the Crossroad,” in February 2012, examined the integrated roots of rock ’n’ roll, while his fourth, in April 2013, “At the Speed of Instinct: Choosing Together to Play and Stay Together,” demonstrated the complexity of the spur-of-the-moment choices that define jazz improvisation. Marsalis returned to campus in September 2013 for “Setting the Communal Table: The Evolution of the Jazz Orchestra,” a lecture on the history of orchestral jazz featuring the Jazz at Lincoln Center Orchestra. He concluded the six-lecture and performance series at Sanders Theatre in 2014 with “New Orleans: The Birth of Jazz.”

In addition to his lectures, Marsalis engaged in dialogue with students throughout the University and community, taught master classes at a local high school, participated in a panel discussion about education and the arts at Harvard Graduate School of Education, and spoke at the Harvard Innovation Labs about the artist as an entrepreneur.

Marsalis is an internationally acclaimed musician, composer, and bandleader, an educator, and a leading advocate of American culture. A native of New Orleans, he is one of the nation’s most highly decorated cultural figures. In addition to winning nine Grammy Awards, he was the first jazz musician to receive the Pulitzer Prize for Music for his oratorio “Blood on the Fields.” Marsalis has received both the National Humanities Medal and the National Medal of the Arts, the highest awards given to artists by the U.S. government. He was awarded an honorary doctorate in music by Harvard University in 2009.

His international accolades include honorary membership in Britain’s Royal Academy of Music, the highest decoration for someone not a British citizen, and the insignia of the Chevalier of the Legion of Honor, France’s highest distinction.

Marsalis is one of the most prolific and inventive composers of his generation, having created an expansive range of music for everything from jazz quartets to big bands, chamber music ensembles to symphony orchestras. He has written for tap, ballet, and modern dance, and collaborated with an unprecedented range of artists, from Willie Nelson (Texas) to Igor Butman (Russia) to Chano Dominguez’s Flamenco Art Ensemble (Spain), Yacub Addy and Odadaa! (Ghana), and the Sachal Jazz Ensemble (Pakistan).

He has recorded 99 albums and has more than 450 compositions to his credit. Marsalis has also written and produced a Peabody Award-winning radio and television series and an Emmy-winning short feature for Super Bowl XLVII.

Marsalis is currently managing and artistic director of Jazz at Lincoln Center.

Tickets for the event at Sanders Theatre are free. They will become available for the Harvard community on Tuesday and for the public on Wednesday. For information on obtaining tickets, visit the Harvard Box Office website. To learn more about Marsalis, visit his website.