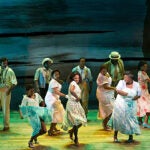 ‘Porgy and Bess,’ made new

Harvard University announced today that Wynton Marsalis will continue his two-year lecture series with an appearance at Sanders Theatre on Sept. 15. Currently the artistic director of Jazz at Lincoln Center, Marsalis is an accomplished musician, composer, bandleader, and educator who has made the promotion of jazz and cultural literacy his hallmark causes.

Marsalis’ second lecture, “The Double Crossing of a Pair of Heels: The Dynamics of Social Dance and American Popular Musics,” will be accompanied by live performances by acclaimed dance professionals, including Jared Grimes, Nelida Tirado, Eddie Torres Jr., Heather Gehring, and Lou Brockman.

“In this lecture, I will address the dynamic relationship between American music and social dance in our culture,” Marsalis said. “It will focus on what our dancing and music tells us about our traditions, our sense of community, and our rituals of courtship.”

Marsalis kicked off his lecture series in April before a sold-out house with “Music as Metaphor,” a two-hour journey through the history of American music that included live musical interludes. Illustrating his gift for combining prose and music with wisdom and humor, Marsalis led the crowd through a narrative that explained the evolution of jazz and the blues, and revealed how American music was vital to the development of the nation’s collective history.

“Wynton Marsalis’ visit to Sanders Theatre last spring was an extraordinary synthesis of performance and spoken word, full of captivating musical moments, but, more than that, wonderfully incisive in exploring music as a metaphor for aspects of contemporary life,” Harvard President Drew Faust said. “I greatly look forward to welcoming him back.”

Marsalis’ lecture is one of several arts events that will take place throughout the year as Harvard celebrates its 375th anniversary. The Marsalis lecture series highlights the University’s focus on the arts since a 2008 presidential task force called for an increased arts presence.

A native of New Orleans, Marsalis is one of the nation’s most highly decorated cultural figures. In addition to winning nine Grammy awards, he was the first jazz musician to receive the Pulitzer Prize for music. His international accolades include an honorary membership in Britain’s Royal Academy of Music, the highest decoration for a non-British citizen, and the insignia of chevalier of the Legion of Honor, France’s highest distinction. He has more than 70 albums to his credit, which have sold more than 7 million copies. Marsalis is also the first jazz artist to perform and compose across the full spectrum of jazz: from its New Orleans roots to bebop and modern jazz. By creating and performing an expansive range of new music for everything from quartets to big bands, chamber music ensembles to symphony orchestras, and tap dance to ballet, Marsalis has expanded the vocabulary of jazz and created a vital body of work that places him among the world’s finest musicians and composers. Harvard awarded him an honorary doctorate in music in 2009.

Tickets for Marsalis’ lecture at Sanders will be free. They will become available for the Harvard community today and for the public on Sept. 8. For information on obtaining tickets.