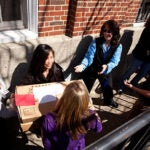 Will teach a master class at Cambridge Rindge and Latin School

CAMBRIDGE, Mass. (April 4, 2011) — Harvard University announced today (April 4) that Wynton Marsalis will launch a two-year performance and lecture series on April 28, with an appearance at Sanders Theatre. Currently the Artistic Director of Jazz at Lincoln Center, Marsalis is an accomplished musician, composer, bandleader and educator who has made the promotion of jazz and cultural literacy his hallmark causes.

“Wynton Marsalis is both an internationally acclaimed musician and a leader in educating people about the importance of arts and culture,” Harvard President Drew Faust said. “We are fortunate to have an artist and performer of his caliber on campus to enhance the University’s vibrant arts scene and engage our students, staff and faculty.”

Throughout the ages, artists have been truth tellers for civilization; they speak about the essence of their society in ways that others cannot or will not. Marsalis will visit campus several times, for two to three days at a time, over the next two years, lecturing on a variety of topics to illuminate the relationship between American music and the American identity. His talks will be punctuated with performances by dancers, Marsalis’ quintet and other ensembles, including a New Orleans parade band and the Jazz at Lincoln Center Orchestra.

Marsalis’ appointment is the latest example of the University’s closer embrace of the arts since a presidential task force called in 2008 for a concerted effort to increase the presence of the arts on campus.

“I am delighted that Harvard has recognized the need to make cultural literacy an integral part of its curriculum,” Marsalis said. “I hope that other institutions will follow suit to foster a deeper appreciation among all Americans for the democratic victory of our cultural legacy.”

Since 2008, there has been a renewed focus on bringing prominent artists to campus who can engage students and the wider community in the kind of imaginative and innovative thinking that is central to the cognitive life of the University. For example, renowned large-scale artist Krzysztof Wodiczko now teaches at the Harvard Graduate School of Design, while this semester Tony-nominated Diane Paulus, Artistic Director for the Harvard University American Repertory Theater, is teaching “Porgy and Bess: Performance in Context” at Harvard College.  Last year, Harvard announced that the Silk Road Project, founded by renowned cellist Yo-Yo Ma, would move its headquarters to Harvard. And this fall, renowned choreographer Liz Lerman, MacArthur grant recipient and founder of the Liz Lerman Dance Exchange, will be a Visiting Lecturer in residence at Harvard.

A native of New Orleans, Marsalis is one of America’s most highly decorated cultural figures. In addition to nine Grammy awards, he was the first jazz musician to receive the Pulitzer Prize for Music. His numerous international accolades include: an Honorary Membership in Britain’s Royal Academy of Music, the highest decoration for a non-British citizen, and the insignia Chevalier of the Legion of Honor, France’s highest distinction.  He has more than 70 albums to his credit, which have sold over 7 million copies worldwide. Wynton Marsalis is also the world’s first jazz artist to perform and compose across the full spectrum of jazz: from its New Orleans roots to bebop and modern jazz. By creating and performing an expansive range of brilliant new music for quartets to big bands, chamber music ensembles to symphony orchestras, and tap dance to ballet, Marsalis has expanded the vocabulary of jazz and created a vital body of work that places him among the world’s finest musicians and composers. Harvard awarded him an honorary doctorate in music in 2009.

Tickets for Marsalis’ lecture performance at Sanders Theatre will be free of charge, and will become available for the Harvard community on Tuesday, April 12, and to the general public on Thursday, April 14. Information on obtaining tickets can be found at http://ofa.fas.harvard.edu/boxoffice/.