Marsalis: ‘Meet Me at the Crossroad’ 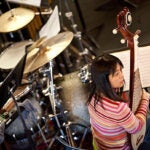 Sounds of the Silk Road

Wynton Marsalis continues his two-year lecture series at Harvard with an exploration of root styles of American music in Sanders Theatre on Feb. 6. Currently the artistic director of jazz at Lincoln Center, Marsalis is an accomplished musician, composer, bandleader, and educator who has made the promotion of jazz and cultural literacy his hallmark cause.

“The blues, American folk music, gospel, American popular song, hillbilly, bluegrass, country western, and jazz are root styles of our national music,” Marsalis said. “This lecture will identify the similarities and differences of those roots, and explain why they are musically compatible.”

In addition to his lecture-performance, Marsalis will spend the following day on the Harvard campus, appearing in a panel on “Educating for Moral Agency and Engaged Citizenship” held at the Harvard Graduate School of Education, and co-hosted by the W.E.B. Du Bois Institute for African and African American Research. Later that day he will participate in a discussion at Harvard’s new Innovation Lab to talk about the artist as entrepreneur.

Marsalis launched his lecture series last April before a sold-out house with “Music as Metaphor,” a two-hour journey through the history of American music, punctuated with performances by renowned bluegrass and jazz musicians. He returned to campus in September with a team of dancers for his second lecture, “The Double Crossing of a Pair of Heels: The Dynamics of Social Dance and American Popular Musics,” which traced the evolution of American social dance from the Charleston to the fox trot and the tango to the twist.

“Marsalis’ prior lectures have illustrated vividly the ways in which the arts have intertwined with the history and culture of our country,” Harvard President Drew Faust said. “Just as importantly, they have acted as catalysts for activity on our campus, prompting class discussions, inspiring study, and elevating the arts across campus. I look forward to hearing him again next month.”

In addition to his lectures, Marsalis has engaged in dialogue with students across the University and throughout the community, teaching a master class and holding a question-and-answer session with students from Harvard and local public high schools.

Marsalis’ lecture is one of several arts events taking place throughout the year as part of Harvard’s 375th anniversary celebration. The Marsalis lecture series highlights the University’s focus on the arts since a 2008 presidential task force called for increasing the presence of the arts on campus.

A native of New Orleans, Marsalis is one of the nation’s most highly decorated cultural figures. In addition to winning nine Grammy awards, he was the first jazz musician to receive the Pulitzer Prize for music. His international accolades include an honorary membership in Britain’s Royal Academy of Music, the highest decoration for a non-British citizen, and the insignia of chevalier of the Legion of Honor, France’s highest distinction. He has more than 70 albums to his credit, which have sold more than 7 million copies. Marsalis is also the first jazz artist to perform and compose across the full spectrum of jazz: from its New Orleans roots to bebop and modern jazz. By creating and performing an expansive range of new music for everything from quartets to big bands, chamber music ensembles to symphony orchestras, and tap dance to ballet, Marsalis has expanded the vocabulary of jazz and created a vital body of work that places him among the world’s finest musicians and composers. He was recently named a CBS News Cultural Correspondent. Harvard awarded him an honorary doctorate in music in 2009.

Tickets for Marsalis’ lecture at Sanders will be free. They will become available for the Harvard community Jan. 26 and for the public Jan. 27. For information on obtaining tickets.