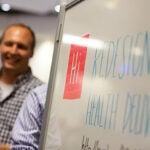 Jazz leader will perform, lecture on art of making music as a group

Wynton Marsalis is returning to Harvard to continue his two-year lecture series, “Hidden in Plain View: Meanings in American Music,” with a talk on improvisation at Sanders Theatre on April 17. Currently the artistic director of Jazz at Lincoln Center, Marsalis is an accomplished musician, composer, bandleader, and educator who has made the promotion of jazz and cultural literacy his hallmark cause.

In addition to his lecture-performance, Marsalis will teach a master class to more than 100 local high school students the following day at the Boston Arts Academy.

Marsalis’ lecture, the fourth in the series, is titled “At the Speed of Instinct: Choosing Together to Play and Stay Together.” It will begin at 7 p.m. and include musical illustrations by acclaimed musicians, including Walter Blanding (tenor sax), Ali Jackson (drums), Carlos Henriquez (bass), and Marcus Roberts (piano). For the first time in the series, the event will be live-streamed at harvard.edu/livestream.

“We will discuss and demonstrate the techniques, concepts, methods, opportunities, and objectives that encourage spontaneous, intelligent, and cohesive group decision-making in our music,” Marsalis said. “We will also illuminate how each member of the quintet asserts, accompanies, and adjusts to balance the freedom of improvisation with the sacrificial demands of finding and maintaining our common rhythm, known as swing.”

Marsalis’ lecture series, sponsored by the Office of the President and the Office of the Provost, launched in April 2011 before a capacity crowd with “Music as Metaphor,” a two-hour journey through the history of American music, punctuated with performances by bluegrass and jazz musicians. He returned to campus in September 2011 with a team of dancers for his second lecture, “The Double Crossing of a Pair of Heels: The Dynamics of Social Dance and American Popular Musics,” which traced the evolution of American social dance from the Charleston to the fox trot and the tango to the twist. His third lecture, “Meet Me at the Crossroad,” examined the roots of American music.

“Wynton’s presentations over the past two years have been unforgettable for all of us who have experienced them,” Harvard President Drew Faust said. “I am delighted that his magical weaving of music, dance, and the evolving arc of inclusiveness and justice in American history will this time be available to a wide audience through the Internet.”

In addition to his lectures, Marsalis has engaged in dialogue with students throughout the University and community, taught master classes at a local high school, engaged in a panel discussion about education and the arts at the Graduate School of Education, and spoke at the Harvard Innovation Lab about the artist as an entrepreneur.

A native of New Orleans, Marsalis is one of the nation’s most highly decorated cultural figures. In addition to winning nine Grammy Awards, he was the first jazz musician to receive the Pulitzer Prize for music.

His international accolades include honorary membership in Britain’s Royal Academy of Music, the highest decoration for someone not a British citizen, and the insignia Chevalier of the Legion of Honor, France’s highest distinction. He has more than 70 albums to his credit, which have sold more than 7 million copies, and three albums earned three gold records.

Marsalis is also the first major jazz artist to perform and compose across the full spectrum of jazz, from its New Orleans roots to bebop and modern jazz. He has expanded the vocabulary of jazz by creating an expansive range of music for everything from quartets to big bands and symphony orchestras, and tap dance to ballet and modern dance. He was recently named a CBS News Cultural Correspondent. Harvard awarded him an honorary doctorate in music in 2009.

Tickets for Marsalis’ lecture at Sanders will be free. They will become available for the Harvard community on April 9 and for the public on April 11. For information on obtaining tickets, visit the Harvard Box Office website. Learn more about Wynton Marsalis.