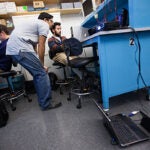 A break to explore

Plans for Dunster House — the first undergraduate residence to undergo full House renewal — reveal significantly expanded social and program spaces and new horizontal corridors that will complement the traditional vertical entryways.  According to administrators helping to guide the project, the updates will help transform the building to better support the living and learning needs of today’s students, while preserving the character of the neo-Georgian river House.

Work will begin in June, immediately following Commencement.  Dunster’s renewal follows two “test projects” — Stone Hall (the neo-Georgian portion of Quincy House formerly known as Old Quincy), which reopened to students last summer, and Leverett House’s McKinlock Hall, whose upgrade is set to be unveiled this summer. It was announced in the fall that Winthrop House is scheduled to be the next undergraduate residence to be renewed after Dunster.

On the west side of the lower level, a high-tech “smart classroom” will give faculty the opportunity to teach classes in the building. As students move past the classroom and along the horizontal corridor, they will find new lounge spaces and a game room. Along the north corridor will be an art studio that will include a kiln, as well as a music practice room, one of three such new spaces. On the east side, the House grille will connect to a large common room with a television.

“With Dunster, for the first time we’re dealing with the whole House, both the living and all of the public and common spaces, and that means the opportunities are different and expansive compared to Quincy and Leverett,” said project architect Stephen Kieran of KieranTimberlake. “When taking on a whole House you have all the pieces of the puzzle and you can take a holistic approach and reallocate spaces more comprehensively. In the lower level, it will all be open and interconnected, so what we’ve been able to do is actually create a center for all of those activities.”

The new lower-level activities center will offer views of the fitness and exercise rooms and a multiuse recreation room.

“House renewal brings with it great potential in two important respects,” Dunster House Masters Roger and Ann Porter wrote in an email. “First, it permits elevating fresh priorities, including how space will be used.  The exterior footprint of a venerable and beautiful set of buildings will remain the same.  Inside, however, we can create more public spaces and make much better use of the area below where our student living suites reside.

“Second, renewal permits us to introduce the technologies characteristic of the 21st century to facilitate learning and communication in fresh and exciting ways. We are confident that it is possible to retain the tradition and beauty associated with rooms like our dining hall and library while at the same time to create the reality that House life has moved into a new era full of promise and innovation.  As is obvious, we are full of optimism about the future and grateful for the commitment of the College to this exciting development.”

Common spaces throughout the House will be repurposed to support undergraduate living and learning.

“There will be about a 33 percent increase in program space,” said Merle Bicknell, assistant dean for FAS physical resources. “One of the other benefits to House renewal is getting the faculty back into the Houses. As we’re seeing with Stone Hall, they are coming in to teach, and then they’re staying and having lunch with the students and continuing their discussion.”

While the interior space will be reconfigured and reinvigorated, the historical feel and character of the House will be preserved.

“One of the great benefits of House renewal is that while we cannot change the footprint, we can reconfigure and reuse the space in very exciting ways. We will have a lot more common and classroom space and it will feel a lot more open,” said Roger Porter, who is also the IBM Professor of Business and Government at Harvard Kennedy School. “We have a lovely library, dining hall, and junior common room, and while those will be freshened up, they will retain their beauty and their character.”

New horizontal corridors will better connect the tutor communities and improve flow and access, allowing students to move across the building without having to exit into the courtyard and then re-enter the building.

On the first floor, there will be a new seminar room. Also, an 80-person lounge connected to the courtyard will serve as a site for student-faculty dinners and other functions.

Renewal will prioritize energy-efficient technology and water conservation, with the plan for Dunster to be a LEED Gold certified building, similar to Stone Hall. A water retention system will be installed, while better-insulated walls and windows will have the dual benefit of reducing energy use and improving student comfort.

“House renewal is a top priority for the College, the FAS, and the University, and I am pleased by the tremendous progress,” said Faculty of Arts and Sciences Dean Michael D. Smith. “The students, tutors, and House Masters Roger and Ann Porter helped to shape the plans for Dunster, creating spaces that will better support 21st century living and learning. We have received an incredible amount of positive feedback regarding the renewal of Stone and McKinlock Halls, and I am excited to take the next step with the renewal of Dunster.”