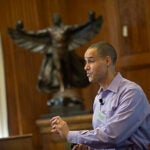 The gains from diversity

A recent event called a “giant study break” brought together students from the various swing housing locations and Leverett towers. The gathering was a chance for them to sample a smorgasbord of tasty treats, gather with housemates, and visit venues they have yet to explore.

With construction ongoing, some Leverett House students are living temporarily in Hampden, Ridgley, and Fairfax halls, and 20-62 DeWolfe St.

McKinlock, the older neo-Georgian section of Leverett, is the latest project in the House renewal initiative, a system-wide effort involving the University’s 12 undergraduate Houses. Like the other river Houses, most of which were built in the 1920 and ’30s, McKinlock was designed to accommodate students whose needs were very different from those of today’s Harvard scholars, with their host of electronic devices and ways of socializing never envisioned by their pre-World War II predecessors.

While much of the building’s historic façade will be familiar, though entirely restored, the interior will have been fundamentally reconfigured. In addition to better room configurations and circulation, McKinlock will have modern common spaces for meeting, studying, or just hanging out, as well as dedicated areas for music, art, and performances. Planned changes include the elimination of walk-through bedrooms, creation of additional single rooms, addition of elevators for accessibility, and horizontal internal corridors that will connect the traditional entryways.

Quincy House’s Stone Hall was the first project in the renewal initiative. In just a few months, Stone Hall has shown how renewal will provide undergraduates with improved spaces that are designed to better support learning, exploration, relaxation, and fun.