Next up for renewal: Winthrop 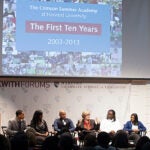 A boost for city students

Winthrop House is expected to be the next undergraduate residence to be renewed as part of the effort to reinvigorate Harvard College’s historic House system, Dean Michael D. Smith of the Faculty of Arts and Sciences (FAS) announced today. Under the plan, and pending final approvals in coming years, Winthrop will be taken offline for 15 months immediately following Commencement in 2016, and will reopen to undergraduates in the fall of 2017.

The plans for Winthrop House follow the recent reopening of the renewed Stone Hall (the neo-Georgian portion of Quincy House that was formerly Old Quincy) and the ongoing construction on Leverett House’s McKinlock Hall, and will follow the renewal of Dunster House scheduled to begin in June. The announcement also follows last Saturday’s launch of the FAS Capital Campaign, at which it was revealed that House renewal and the “student experience” constitute one of the six main fundraising priorities.

“Even as we confronted the fiscal challenges of the last few years, we’ve continued to make progress on House renewal. It’s a top priority for the College, the FAS, and the University,” Smith said. “It is also a major priority for the capital campaign.  The renewal of Stone Hall has been a terrific success, with great feedback so far from students and Quincy House administrators. With the renewal of Leverett McKinlock under way this year and Dunster House slated for construction beginning this summer, this is the right time to begin preparations for the next House to be renewed, Winthrop.”

“As Quincy House Master Lee Gehrke said at the opening ceremony for Stone Hall, House renewal has always been about more than bricks and mortar,” Smith said.  “House renewal is about re-envisioning the Houses and the spaces they contain to better support today’s students and programming, while at the same time preserving the historic character that makes Harvard’s residential system so special. We hope to refresh the Houses — both physically and programmatically — to better serve as living-learning communities for the 21st century.”

“The House system creates wonderful multigenerational communities of undergraduate and graduate students and faculty living and learning together,” said Donald Pfister, interim dean of Harvard College and Asa Gray Professor of Systematic Botany. “I learned firsthand the important role the Houses play in the social and intellectual life of Harvard College as the master of Kirkland House for 18 years. By renewing the Houses, we are reinvigorating the undergraduate experience for future generations of College students and faculty.”

Winthrop House consists of two buildings, Gore and Standish halls, both built in 1916 as freshman dorms, each with its own dining hall and social spaces. Following President A. Lawrence Lowell’s creation of the House system in the 1920s, the buildings were converted into a single House, with dining and social spaces consolidated.  The buildings were originally intended to house 300 first-year students. Today, more than 400 sophomores, juniors, and seniors call Winthrop home. The House’s name honors two men, John Winthrop, the first governor of the Massachusetts Bay Colony, and his descendent and namesake, an astronomer who served as Harvard’s president from 1773–1774.

“Stephanie and I are delighted that Winthrop House is next in line for House renewal,” said  House Master Ronald S. Sullivan Jr., clinical professor of law at Harvard Law School and director of the Harvard Criminal Justice Institute. “We look forward to working with our students, Harvard staff, and construction professionals in designing a living-learning space to accommodate Winthropians for years to come.”

As with Stone Hall, McKinlock Hall, and Dunster House, the plans to renew Winthrop will follow guidelines informed by the recommendations of the House Program Planning Committee, a group of undergraduates, House masters, faculty, and administrators who engaged in a yearlong conversation about the mission and purpose of the undergraduate Houses and consulted broadly with undergraduates and other faculty. As in the first three projects, Winthrop students will live in swing housing during the 2016–17 academic year, while the House is under construction.

Since plans to renew Stone Hall were announced in 2011, nearly a dozen student-feedback groups have provided comments and recommendations on designs for each renewal project. Feedback groups also have been engaged on the design of and programming for swing housing and will be consulted on the redesign of Winthrop.

The strategic assessment will document the lessons learned in design, construction, financing, and programming from the first three projects. The results will help guide future projects, including Winthrop.

The assessment activities will include surveys of students living in the three completed projects, audit energy use, confirm life-cycle and operating-cost analyses, evaluate engineering strategies, and identify and evaluate strategic procurement opportunities.

“We learned a great deal from the successful completion of the first test project, Stone Hall,” Smith said. “We are already learning more from the second test project, Leverett McKinlock, the first facility that includes a dining hall, social spaces, and a master’s residence.  We are applying these lessons as we tackle the first full House, Dunster.

“We have believed from the beginning that we would need to step back after the completion of the first full House to very strategically and deeply assess the first three projects and to ensure those lessons are applied to the future,” he said.  “House renewal is such an important project for Harvard — a project that will impact undergraduates for the next century — that we must make sure we are getting it right for future generations.

“One of the lessons we have already learned is that preparation for the renewal of a full House is better done over four years, not three. We’ll be using that timing with Winthrop House,” said Smith.

From the beginning, the House renewal project has been dependent on scores of individuals throughout the Harvard community, and particularly on the generosity of alumni donors.

“I want to thank again every Harvard alum who has contributed to House renewal,” Smith said. “By doing so, you are truly influencing the residential experience of thousands of future Harvard College students.

“I also want to thank the masters of Quincy, Leverett, Dunster, and Winthrop Houses,” Smith added. “They have been true partners in this important endeavor and have really helped guide how we approached each House to date. I also want to thank the architects — Steve Kieran and his team at Kieran Timberlake — who have done a superb job of maintaining the historic character of each of these projects while ensuring they can support the living and learning needs of 21st-century undergraduates.”