Inside the annual ‘Messiah’ sing 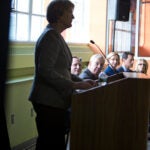 A new community, a new era

A different noise filled the Dunster House dining hall on Dec. 5. The clinking of silverware, scraping of chairs, and chatter of students was replaced by singing and orchestra music from the 42nd Dunster House “Messiah” sing.

The sing is a casual but beloved annual performance of “Messiah,” an oratorio from 1741 by George Frideric Handel, using a trained conductor, orchestra, and soloists with the choir comprised of audience members.

Gund University Organist and Choirmaster in the Memorial Church Edward Elwyn Jones led this year’s performance with accompaniment from the Bach Society Orchestra, an undergraduate student-run orchestra, and four soloists. Two of the four live in Dunster, a point that current graduate student Seth Herbst ’08, the organizer and a tutor in the house, said made this year special.

The good-natured choir easily followed Jones’ frequent suggestions and encouragement. After the first song, he asked them to move in closer and form a “proper choir,” as he called it.

“It’s a glorified sing-along, in the best way,” Herbst said. The event was open to the public and drew members from all over, as well as a tutors, students, and House Masters Roger Porter and his wife, Ann.