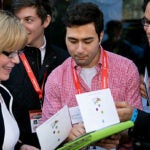 To cope with rising sea levels, African architect suggests building on the water

By the end of this century, sea levels could rise worldwide by 3 feet or more, inundating coastal cities and spurring catastrophic storms roughly every three years.

In Africa, at least 20 cities — including Cairo, Egypt; Cape Town, South Africa; and Kinshasa, Democratic Republic of the Congo — are especially vulnerable to rising seas. At the top of the list is Lagos, Nigeria, a fast-growing, low-lying coastal city of 13 million. By the year 2100, sea levels there are expected to have risen nearly 4 feet.

Houses and roads in Lagos are built on spongelike terrain that was once sandbars, lagoons, and mangrove swamps. Lagos is also riven with a confluence of inland rivers, adding to its vulnerability to flooding. In 2011, intense rainfall flooded homes, overwhelmed sewers, and turned streets into rivers. Hardest hit in such events are the poor. Slums already hold 70 percent of people in Lagos, a city that draws 3,000 more residents every day.

In the face of that watery future, Nigerian architect Kunlé Adeyemi, founder of the firm NLÉ and a recent visitor to Harvard, proposes a solution: Build houses that float. His African Water Cities Project envisions a future in which modular coastal dwellings are built on platforms stacked with flotation devices.

Adeyemi delivered a lecture on the project March 7 at Harvard’s Graduate School of Design (GSD). That week and the next, he was one of four architects on campus who work in Africa, attending one conference on African development (where design panels and lectures were organized by Africa GSD, a student group) and another on public spaces.

Their projects are spread out in South Africa, Tanzania, Uganda, Liberia, Rwanda, and Nigeria. But they share the idea that architecture can be a powerful tool for social justice, including an appreciation of all things local, from labor and crafts to materials and design.

For his floating cities, Adeyemi had a ready-made local model: Makoko, a slum Venice of 2,200 buildings and 150,000 people on the edge of Lagos. “Everything happens on water,” he said of what he called a “dream world” on the edge of the sea. “It’s an example of maximum urbanization with minimum means.” The streets are water, the cars are gondolas, and the houses are propped on stilts.

Inspired by the clever minimalism of the local residents, he showed a picture of a house with a lumber roof and a bamboo façade. Its owner stood near the kitchen space and open-air bathroom. “This man has all he needs,” said Adeyemi.

Makoko’s commerce is afloat too. In another picture, a woman rowed from house to house in a boat full of goods, sort of the local “mall,” he said. Century-old Makoko also provides Lagos with a third of its fish and most of its milled lumber.

Adeyemi’s prototype structure — he called it a “seed” — was started in 2011 and dedicated earlier this month. The Makoko Floating School is a three-story, 720-square-foot building afloat on a platform of recycled barrels and fitted with solar panels. Its louvered sides and peaked roof, sloping into a rainwater collection system, echo the aesthetics of the nearby houses. “It’s not quite a building,” said Adeyemi, “and it’s not quite a boat.”

In deciding on flotation options, “We settled on the solution we found right there,” he said of the recycled barrels. The same local-is-best ethic applied to the structure’s wood frame and bamboo finish and to the labor, which was provided by “local carpenters who build boats,” said Adeyemi.

The project started from a sense of personal responsibility. Makoko’s former school was a sagging frame house on reclaimed land and needed replacing. The ensuing floating school soon led Adeyemi to a conception of greater scale that could help coastal African cities respond to the effects of climate change. Floating structures, modular in design, could be linked into neighborhoods, he said. Someday, whole floating cities could even migrate from one coastal area to another, giving urbanization mobility.

Present-day Makoko just grew, and it works, despite its seeming chaos. “There is no planning in the conventional sense,” said Adeyemi, and the predictable challenges are stubbornly universal: sanitation, education, housing, and a utilities infrastructure for water, waste, and power.

The project was barely under way when disaster loomed, not from a flood, but from a Lagos city plan to tear down seaside slums. Five hundred Makoko homes were razed, and thousands of residents displaced. Adeyemi and others stepped in, offering the power of their new idea. That was enough, he said, to put resettlement plans on hold for now.

With help from the United Nations Development Programme, the floating school — the tallest building in Makoko — was finished. “It’s become a sort of icon for the community,” said Adeyemi.

More floating schools, churches, and theaters could be next, he said.

Ovink would know. He’s director general for spatial planning and water affairs in the Dutch Ministry of Infrastructure and the Environment, a key post in a low-lying nation that for centuries has dealt with the politics and technology of invasive seas.

He called the Makoko project “almost an island on the water, in a political sense” in Nigeria, where, as with most places, visions of floating cities are not part of the conversational landscape. In the Netherlands, he added, “this would be in our DNA.”

The U.N.’s interest is helpful, said Ovink. But the issues of coastal sea level rise and the fate of coastal cities are just beginning to get attention. He told Adeyemi, “You are in the beginning and the middle of a very complex political debate.”

Even if there were no debate, asked Ovink, would this model of modular floating structures be better than what is there now, and could it scale up in applications elsewhere? “We tried this in the Netherlands,” a nation of 17 million people where only 2,000 live in floating structures. “I hate to disappoint you. We have a culture of living with water, but it doesn’t mean we want to live on water,” he said.

But Makoko has already made Lagos officials think more of the reality of a water-vulnerable city, said Ovink, making the project a way “to enlarge the debate.”

There might be another way to rethink the Africa floating cities idea, he added. Ovink proposed Adeyemi do a studio — a test-case class — on floating buildings that are on coastal land, not on the water. That might be a useful vision for cities confronting rising seas, a brand of architecture that is not fixed on foundations, but that depends on buoyancy.