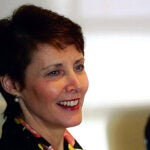 Hundreds of alumni and past faculty celebrate milestone

“Majoring in math had lost its luster for me. It was just too otherworldly,” she told an audience gathered in Science Center B on Saturday (Sept. 25). After some deliberation, she applied to enter Harvard’s newest and “consummately worldly” concentration: social studies.

“Over the course of my career, I’ve taken what is unique about social studies to heart. Uniting political theory, empirical evidence, and history, this interdisciplinary perspective has influenced my teaching, … my scholarship, and my leadership,” she said.

In fact, Gutmann began her teaching career as a tutor for Social Studies 10, the introductory social theory course that binds students across generations.

“You cannot do better intellectually, ethically, and practically speaking than to come to terms with the question: What is a well-constituted society, and what is my role in it?” said Gutmann. “The best way to begin answering this question is to understand how great thinkers did so, and to be open-minded and critical in one’s approach to those thinkers.… Majoring in social studies is one of the very best ways for inquisitive minds to commence their journeys to leadership in virtually any 21st century profession.”

Gutmann’s lecture concluded a daylong event with nearly 400 attendees, including more than 300 alumni and past faculty members. For Anya Bernstein, senior lecturer and director of studies, getting in touch with former students and faculty was one of the most rewarding parts of organizing the celebration.

“Hearing about their enthusiasm for the program has been an incredible pleasure,” she said. “People wrote to us and described how social studies continues to affect them. Some graduates said they use the texts they read in Social Studies 10 in their work, and others wrote about the teaching and advising they experienced.”

“The department is very focused on the actual teaching experience and the relationships that grow within that experience. There are bonds of affection between students and teachers that are very striking. This is something distinctive about social studies that I’d like the celebration to bring out.”

The day was not without controversy. Outside, protesters spoke out against the participation of Marty Peretz, a former member of the department who recently penned a blog post that was disparaging of Muslims. Peretz apologized for his comments in the days before the event, and the department went ahead with plans to accept a gift from a number of Peretz’s former students who wanted to recognize him by establishing an undergraduate research fund.

Kicking off the daylong event was a short film about the early years of social studies at Harvard, made by current concentrator Alissa Costello ’12. The film focused on Professor Stanley Hoffmann, who led the founding of social studies.

The panel “Social Studies and the Social Sciences” brought together some prominent scholars, including Seyla Benhabib (Yale), Rogers Brubaker ’79 (University of California, Los Angeles), J. Bradford DeLong ’82 (University of California, Berkeley), and Sherry Turkle ’70 (Massachusetts Institute of Technology). They spoke about the concentration’s influence on their work as social scientists and about the interdisciplinary approach used in the program as a model for undergraduate education.

A second panel, “Social Studies and Social Change,” gave four alumni the chance to reflect on the relationship between their undergraduate experience and their present commitment to social work. The participants were Jarrett Barrios ’91 (president of the Gay and Lesbian Alliance Against Defamation), E.J. Dionne ’73 (Washington Post columnist), Jamie Gorelick ’72 (former deputy attorney general), and Adele Simmons ’63 (vice chair of Chicago Metropolis 2020).

“We have a lot of students who are very socially engaged and interested in connecting the work they do outside the classroom on human rights, health care, and development with the intellectual work they do inside the classroom,” Bernstein explained. “Many of our graduates have gone on to careers in academia, where they continue to look at these issues or to careers in social change. That’s really exciting, and it’s something to be very proud of.”