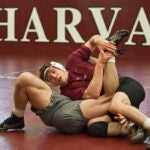 But for Bremer, a veteran middle school math teacher, it was not your average beach vacation. She traveled to remote northwestern Costa Rica as a fellow with the Earthwatch Institute, an international nonprofit that specializes in matching citizen scientists with professionals leading field expeditions around the world.

The institute, among the largest of its kind, just moved its headquarters into a Harvard-owned building in Allston, Mass., bringing with it more access for area schoolchildren and teachers to its fellowships and other resources.

On her work trip, Bremer slept in a bunk bed and ate two meals a day while collecting data for biologists interested in the nesting habits of leatherback turtles, an endangered species whose young emerge from eggs laid on Costa Rican beaches.

At night, Bremer and other volunteers slipped quietly onto the beach to lie behind the 450-pound reptiles. They counted the turtles’ ball-like eggs as they dropped into deep sandy nests. The volunteers also recorded the size of the creatures and tagged the newcomers. They also tracked the fate of hand-size hatchlings, which had to run a gauntlet of predators — crabs and birds — to reach the sea.

Leatherback turtles, whose winglike flippers can span 9 feet, are “pretty much dinosaurs,” said Bremer. “Big, solid, and stubborn.” They lumbered onto the beach to dig their nests, leaving behind tracks as wide as a farm tractor’s.

The Earthwatch expedition brought adventure, knowledge, and ecological thrills, said Bremer, who teaches in Framingham, Mass. While at the research site, she blogged about her experience, and readers chimed in from the United States, Canada, Mexico, and Brazil. She also taught daytime lessons via Skype for her students. They practiced math skills by charting temperatures, and by doing metric conversions on distances from sea to nest.

When she returned to school, “I was the coolest thing, for a month or two,” said Bremer of the students’ reactions. “All of a sudden, I was everybody’s hero.”

The experience inspired Bremer to deliver talks at other schools, to develop new lesson plans, and to take a summer seminar for teachers at Boston College’s Urban Ecology Institute. “They really got that ball rolling,” she said of Earthwatch. “There’s so much we can do with kids. They get excited when we are excited.”