Commencement represents a time for both departing and returning. Just at the moment when seniors graduate, alumni gather for reunions – and the opportunity to assist the College. Each class is unique, demonstrating its support in different ways.

Harvard’s Class of 1981, having graduated a few months after the first-ever space shuttle launch by the United States, has been busy launching a record of its own. As of May 23, the class had raised $37.8 million and was poised to surpass the

$38.5 million 25th reunion record. If the class reaches its participation goal of 72.5 percent, it will boast the highest number of donors – 1,067 in all – for any reunion ever.

The Class of 1956 is celebrating another milestone – the first joint 50th reunion with Radcliffe. Social and fundraising committees have organized events at places such as the Library of Congress in Washington, D.C., NASA’s Jet Propulsion Laboratory in California, and the Gracie Mansion in New York City. The class has raised over $16 million as of May 23, and members say they are not done yet. 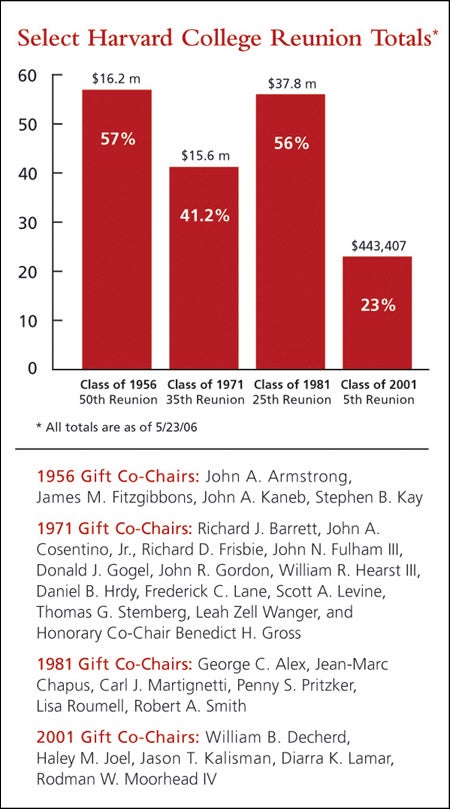 The Class of 1971 created a strong gift committee to rally for its 35th reunion, contributing

$15.6 million as of May 23. The class is two-thirds of the way toward its 60 percent participation goal.

Younger alumni have also stepped up to say “thanks” to the College, raising nearly $450,000 from 23 percent of the Class of 2001. As of May 23, the class was on track to garner the third-highest fifth reunion gift total.