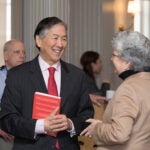 People in low- and middle-income countries are willing to travel and pay for health care at a higher quality facility rather than use a free clinic closer to home — a convention-busting finding that changed the course of Associate Professor Margaret Kruk’s career. She was honored for her work on improving health care quality around the world at the eighth annual Alice Hamilton Award lecture on May 8, 2018, at the Harvard T.H. Chan School of Public Health.

Kruk was presented with the 2018 Alice Hamilton Award by Jane Kim, professor of health decision science and chair of the Committee on the Advancement of Women Faculty (CAWF). The award recognizes the impact in public health and the future promise of a woman faculty member, and honors the memory of Hamilton, a pioneer in the fields of toxicology and occupational health who was the first woman appointed to the faculty at Harvard.

In her award lecture, “Access is not enough: Learning from users to build better health systems,” Kruk called Hamilton an inspiration. She advocated for people without power and dug deep to understand their lives, Kruk said, noting that this approach motivates her own work. Speaking to poor women in rural Tanzania first led her to conclude that health systems may not be providing the care that people want, she said.

Since last year, Kruk has been the chair of The Lancet Global Health Commission on High Quality Health Systems in the SDG [Sustainable Development Goals] Era. In that role, she has led an effort to develop policy recommendations for improving health care quality in low- and middle-income countries.

In her remarks, Spiegelman shared advice that she has offered to the many women she has mentored over the years. “Speak up, take risks, be visible, and take advantage of opportunities” at work, she said, and “expect equality with your spouse.”

Paige Williams, senior lecturer on biostatistics, received the inaugural CAWF Service Award. She was recognized as a founding member of CAWF’s predecessor, The Committee on the Concerns of Women Faculty, established in 1992. As part of her work with CAWF, Williams conducts the School’s annual analysis of faculty promotion and salary by gender.