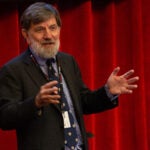 For disease risk, is it genes or the environment?

The American Academy of Political and Social Science (AAPSS) has named Raj Chetty, Ph.D. ’03, one of its five Fellows of the Academy in 2019.

The AAPSS is one of the oldest and most distinguished learned societies in the country. Since 2000 it has inducted yearly fellows based on their contributions to society through research and public service.

Chetty is the William A. Ackman Professor of Public Economics at Harvard University, and the director of Opportunity Insights. In both roles he finds innovative ways to use “big data” to explore avenues to success for children from disadvantaged backgrounds. He also explores opportunities to combined empirical evidence and economic theory to help design more effective government policies.

“The annual election of a small number of exceptionally distinguished scholars as Academy Fellows never fails to remind us that social science, at its best, is constantly expanding its knowledge base and, on that foundation, honoring its social responsibility as an agent of improvement,” said Kenneth Prewitt, president of the AAPSS.

With the addition of the five members in 2019, there will be 134 Fellows of the Academy. Most are university-based scholars responsible for research that has changed our understanding of human behavior and the world in which we live; others are public servants who have used research and evidence in institutions of government to improve the common good.