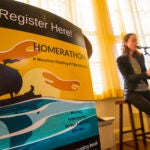 New chapter for 'The Odyssey'

In his 2011 book, “The Better Angels of Our Nature: Why Violence Has Declined,” Harvard psychologist Steven Pinker argued that despite common assumptions, violence has dropped dramatically from biblical times to the present. His new book, “Enlightenment Now: The Case for Reason, Science, Humanism, and Progress,” picks up on that theme, exploring how other threats to human well-being have been in similar retreat.

GAZETTE: In “The Better Angels of Our Nature,” you explored how the trend toward peace has steadily increased. Why expand the premise of that book for “Enlightenment Now”?

Human flourishing has been enhanced in measure after measure, and I wanted to tell the broader story of progress, and also to explain the reasons. The answer, I suggest, is an embrace of the ideals of the Enlightenment: that through knowledge, reason, and science we can enhance human flourishing — if we set that as our goal. The goal, too, is a gift of the Enlightenment, namely the moral commitment to humanism, in which the ultimate good is the well-being of people.

GAZETTE: In a recent conversation with Bill Gates you talked about the notion of tribalism — of focusing on yourself and those immediately around you to the exclusion of others. How do you counter that impulse to help only yourself and your tribe, and encourage people to embrace a more altruistic ideal?

pinker: At first hearing, the ideal of promoting human well-being might sound unexceptionable, even banal or trite. But it most certainly isn’t! There are distinct alternatives with much greater emotional appeal. These include the idea that the ultimate good is to promote the greatness of one’s tribe or race or faith or nation; to obey the dictates of a divinity and pressure other people to do the same; to achieve feats of heroic greatness; to transcend the teeming masses by doing something that will put you in the history books, such as martial conquest or feats of artistic greatness.

The idea that we should get as many people as possible to live long, healthy, happy lives is far from obvious. Thankfully, it is an ideal that the world has increasingly embraced. You see this humanism in statements such as the Universal Declaration of Human Rights, the U.N. Millennium Development Goals, and the U.N. Sustainable Development Goals. It puts the lie to the claim that in the absence of religion there are no shared values. There are. When you get people from different backgrounds together to decide how we should run our affairs, the conversation tends to move toward humanism because it values nothing more — but nothing less — than our common humanity.

GAZETTE: You say in the book that journalistic culture is focused on negative headlines, but that seems like something that’s been going on forever. Has social media driven some of this pessimism forward?

pinker: It’s not just the internet age. In the book I cite a study using the automated technique called sentiment mapping to chart the use of positive words like “improved,” “better,” and “beneficial” compared to negative words like “catastrophe” and “crisis.” It shows that since the 1950s, the press has gotten steadily more morose. So it is not a sudden shift with the onset of social media: It’s been happening for decades, even as the actual indicators of human well-being have improved. Over the span of increasing media negativity, there have been fewer wars, less crime, and less poverty.

Partly it’s that the press has adopted the ethic that pessimism is moral. It’s serious; it earns you gravitas. Optimism, even if it’s just a readout of the data, is considered frivolous — “advertising,” as one editor put it. Of course there is an optimal amount of pessimism; we have to identify suffering and injustice where it exists. But we also need the conviction that we can do something about it. If you think that the world is just getting worse and worse no matter how many efforts people make to make it better, the logical response is: “Why even bother? Enjoy life while you can, because the world is going to hell no matter what you do.” That’s the kind of fatalism I am pushing against.

“If you ask people if we are living in an increasingly dangerous or increasingly safe environment, they will think of the latest terrorist attack and conclude that life has been getting more dangerous — rather than going to FBI data on violent crime, which in fact has shown a decline over 25 years.”
— Steven Pinker

GAZETTE: So much of what we do is actually bad for us. Is our brain our enemy?

pinker: Your brain can’t be your enemy, because your brain is you. But the brain has many subsystems. Some of them incline us toward selfish motives, like revenge, greed, dominance, jealousy. But others are more constructive.  We have cognitive processes that can reflect on our own predicament. We have positive emotions like sympathy and compassion. And thanks to the tools of culture, the written word, and now the electronic word, we have the means to learn from our mistakes, to figure out what works and what doesn’t.

GAZETTE: Is there something in human nature that predisposes us to be negative?

pinker: There is a strand of human nature that does that, called the negativity bias. Losses are more keenly felt than gains. Criticism hurts more than praise emboldens. We tend to be mindful of all the things that can go wrong, not so much when we are reflecting on our own lives, but when we are opinionating about the world as a whole. People often say, “My neighborhood is perfectly safe, and my schools are good. But the country is unsafe and the other schools are going to hell” — sometimes called the “I’m OK; they’re not” bias. When people opine they tend to go negative, partly under the influence of gory headlines and violent images.

Another quirk of human nature is called “the availability bias”: Our assessment of risk and danger is driven by available episodes from memory, not representative data. If you ask people if we are living in an increasingly dangerous or increasingly safe environment, they will think of the latest terrorist attack and conclude that life has been getting more dangerous — rather than going to FBI data on violent crime, which in fact has shown a decline over 25 years. 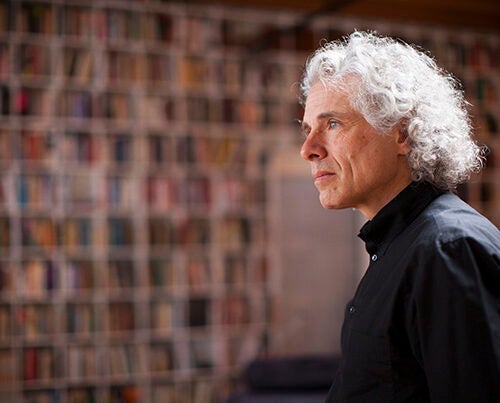 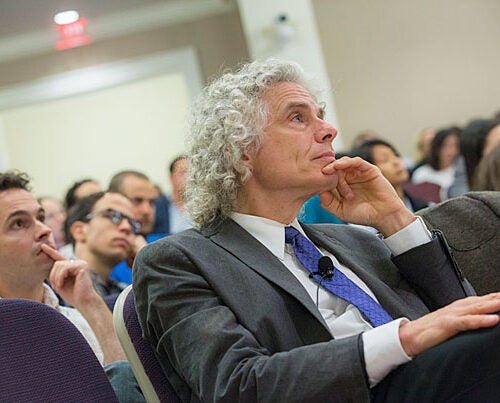 GAZETTE: You’ve said that you think that many intellectuals, even those who call themselves progressive, hate progress. Many of those people are in positions of power. Do you think we have a crisis of responsible leadership in this country?

pinker: I am reluctant to call every shortcoming “a crisis.” But I do think that an absence of leaders who are willing to commit themselves to what has worked in the past and that, despite imperfections, has led to improvement, is part of the problem. There aren’t enough champions of liberal democracy, of Enlightenment values, of the institutions that have quite obviously improved our lot — such as international organizations, responsible governments, and police and court systems that have maintained the rule of law. These have dramatically improved the human condition, yet they are relentlessly disparaged.

And there’s a tendency among intellectuals to point to every unsolved problem as the symptom of a sick society. To me, that’s a cheap grab for gravitas because it assumes that we have a right to expect a perfectly functioning utopia, and that any deviation is a sign that there’s some kind of gangrene at the core. But if we start from the mindset that the universe doesn’t care about our welfare, that things fall apart — the Second Law of Thermodynamics guarantees that — that evolution has saddled us with competitive and selfish instincts, but “the better angels of our nature” can circumvent these tendencies, then we can be grateful for the progress that we have accomplished, try to identify the institutions and norms that have made it possible, and try to enhance them in the future.

The most obvious politician who capitalized on this sense of deterioration is our current president, who campaigned on the premise that social problems had spun out of control, and our current institutions could not deal with them — only a radical lurch, and control by a charismatic leader who is not encumbered by the millstone of an administrative state, could do it, guided by his own authenticity and vision. I personally think that this dangerous development was abetted by some of Trump’s worst enemies on the left, who agreed that American society is a hellhole of inequality, racism, and violence. Not only did they abet his narrative of deterioration, but they left large sectors of the electorate indifferent to the choice between Clinton and Trump, encouraging many young voters to stay at home on Election Day and hand the election to Trump.

GAZETTE: You have been known for breaking down heady concepts with your accessible prose. But this book is loaded with graphs. What do the visuals bring to a work like this, and how can they better convey information?

pinker: For all of my writing on language, I think it can be overrated. Language is not the same as thought; it’s a medium to express thought. There are other media of thought, including visual images. We are primates, with more than a third of our brains devoted to vision. Graphs are a way of exploiting our primate visual system to grasp complex relationships among quantitative data that a string of words is ill-suited to convey. Language is digital, and language is combinatorial. But many aspects of reality are analog, continuous, and multidimensional.

We must develop alternative channels of conveying information, because more and more of our lives ought to be informed by data. We have the classic Cartesian axes going back almost half a millennium, and now geographic mapping enables us to see variables as colors and shapes laid over a map of the world. Dynamic graphs depict change in a way that mirrors the change over time in the world. New graphic forms are putting color to use in new ways, and the third dimension. All these are to be welcomed.

GAZETTE: Is there a lesson in mindfulness and meditation — in other words, do you think we can train our brains to be less pessimistic?

pinker: There is some indication that anxiety increased from the 1950s to the ’90s and leveled off, at least in college students. Now part of this “age of anxiety” is a curse of maturity. When you grow up and take responsibility for the state of the world, you become more aware of all the things that can go wrong, which earlier generations may have not bothered about. Today we are concerned about climate change, and the risks of nuclear war, and poverty, and oppression, more than our ancestors were. We worry about more parts of the world, not just our backyards. Each of us takes on the world’s problems and adds them to our own personal worry list. In part that’s a good thing: It’s better not to be oblivious to the state of the world.

Probably the high point for American happiness was the 1950s, when everything seemed great. Belching smokestacks were signs of progress. The atom bomb was proof of Yankee ingenuity. Housewives lived in domestic bliss. Of course, at some point we had to grow up. And as you grow up you start to worry about more things. That leaves us with the problem of how we can be legitimately concerned about the state of the world without worrying ourselves to death. It may be that mindfulness and other techniques of wisdom, of self-control, of proactive arrangements about your own mental life are necessary to maintain a sense of responsibility for the world while keeping your equilibrium.