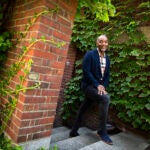 Lawrence D. Bobo, W.E.B. Du Bois Professor of the Social Sciences, has been appointed dean of social science by Claudine Gay, Edgerley Family Dean of the Faculty of Arts and Sciences.

Bobo, who currently chairs the department of African and African American Studies, will take the helm Oct. 1.

A scholar of sociology and African and African American Studies (AAAS), Bobo has illuminated issues of inequality, politics, and race in his research. He was hired in 1997 to a joint position in sociology and the former Afro-American Studies Department. Last year, Bobo helped Gay, then dean of social science, found the FAS Inequality in America initiative, a multidisciplinary effort to elevate teaching and research in this critical area.

“I have deeply valued Larry’s contributions in helping to shape the vision for Inequality in America, in which he has been a leading voice,” said Gay. “He will bring precisely this kind of take-action quality to his leadership of the social science division.”

Bobo said he was thrilled “for the opportunity to deepen ties across the departments and to help colleagues continue to pursue and conduct excellent research and engage in the innovative teaching that has characterized this faculty.”

“It’s been a feature of my career to have worked in a multidisciplinary space that connects sociology, political science, psychology, and AAAS with a dose of history and economics. Likewise, I have long been a student of both quantitative and qualitative research. There’s a way in which my teaching has compelled a very rich and rewarding engagement of the social sciences. In this new role, I want to make sure faculty have the support and resources to accomplish their highest goals.”

Bobo’s most recent book, “Prejudice in Politics: Group Position, Public Opinion, and the Wisconsin Treaty Rights Dispute,” was a finalist for the 2007 C. Wright Mills Award. He is co-author of the award-winning “Racial Attitudes in America: Trends and Interpretations,” and founding editor of the Du Bois Review: Social Science Research on Race, published by Cambridge University Press.

Bobo is a member of the National Academy of Science and a fellow of both the American Academy of Arts and Sciences and the American Association for the Advancement of Science. He has held tenured appointments in the sociology departments at the University of California, Los Angeles, and Stanford University, where he was director of the Center for Comparative Studies in Race and Ethnicity.

“Larry is an accomplished social scientist who shines with intellectual insights,” said Harvard Provost Alan Garber. “Having worked with him in varied settings, I also know him to be a thoughtful, judicious, and wise leader. His appointment is cause for celebration.”

“Being dean will be both demanding and fun,” said Bobo, adding that efforts to mentor younger faculty, continued support of the inequality initiative, and a commitment to gender equality and racial diversity will be among his priorities in the new role.