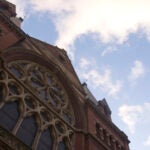 There are a lot of scary threats in the world — extreme weather, terrorist attacks, deadly infectious diseases, mass shootings — but if health care organizations plan ahead for such disasters, lives can be saved.

That was the key message from emergency preparedness expert Paul Biddinger, who spoke to a Harvard T.H. Chan School of Public Health audience in Kresge G-2 on July 31, 2018 as part of the Hot Topics summer lecture series.

The first step for health care organizations preparing for emergencies is to accurately assess the kinds of hazards they may face, such as flooding, power outages, or violence, Biddinger said. They have to develop a plan that takes those hazards into account. They need to train staff about the plan and hold exercises that simulate disasters. “No plan ever looks in practice the way it looks on paper,” said Biddinger. “You have to train and exercise constantly and everybody has to know what the plan looks like.”

In 2005, consultants from Israel who had dealt with bombings that resulted in mass casualties taught Biddinger and colleagues that the average time for the first bombing victim to reach the closest emergency department is four minutes after the explosion. Experts from other cities that had dealt with bombings — including London, Madrid, and Mumbai — confirmed that events unfold incredibly fast during a disaster. Realizing that there wouldn’t be time to do much of anything once a disaster struck, Biddinger and his colleagues developed a plan so that hospital staff would know what to do during a disaster without having to be told.

In 2013, the Boston Marathon was bombed, injuring 275 and killing three. “None of us ever thought someone would bomb the Boston Marathon,” said Biddinger. “Why would you bomb a road race?” But Boston-area emergency responders’ planning and preparation helped. Not a single person who wasn’t killed at the scene died later at a hospital, Biddinger said.

When Biddinger meets people at cocktail parties and they realize he works in emergency preparedness, they invariably ask: “Well, are we prepared?” He said there’s no “yes or no” answer to the question.

“We will never have enough money, enough time, enough resources, to be fully prepared for everything,” he said. “Therefore, we have to do the best we can with what we have … We try to identify our greatest threats, identify our greatest vulnerabilities, improve our plans, test our plans, learn lessons, and do it all over again.” Ideally, he added, the plans are guided by the best available science, “so that hopefully we get better and better and better.”