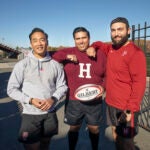 Henry Rosovsky, a leading economist and innovative administrator who twice served as dean of the Faculty of Arts and Sciences and acting president of the University, died Nov. 11 at his home in Cambridge, Massachusetts. He was 95.

Rosovsky joined the Harvard faculty in 1965 and played crucial roles in the evolution of the University, including in the creation of the then-revolutionary Core Curriculum and what is today’s Department of African and African American Studies.

A devoted family man and supporter of Harvard Hillel, Rosovsky, the Geyser University Professor Emeritus and former Economics Department chair, would recount these transformative developments as well as his philosophical wrestling with critical questions about such subjects as tenure and admissions in his 1991 book, “The University: An Owner’s Manual,” his most-cited work.

“Henry was rightly recognized as one of the foremost figures in academia, authoring the definitive work on universities and their complexities. An exceptional scholar of Japan and its economy, he was deeply respected by faculty and colleagues, and he had a unique perspective on Harvard, serving as dean of the Faculty of Arts and Sciences, as a member of the Harvard Corporation, and as acting president,” said Harvard President Larry Bacow. “His legacy continues to influence the experience of every person on our campus today.

“I first got to know Henry Rosovsky while president of Tufts,” he said. “He was wonderfully generous with his time and his advice and became — in all of the years since — both an invaluable counselor and a dear friend. He was, above all, committed to the idea of higher education as a pathway for discovery, knowledge, and opportunity.”

That commitment inspired the students, staff, and faculty he worked with every day, Bacow added: “Henry will be remembered as one of the most influential individuals in the history of the institution.”

Claudine Gay, Edgerley Family Dean, recalled Rosovsky as at once “a legendary figure at Harvard and a kind and generous man.”

“I will never forget our lunch together in my first weeks as dean of the Faculty of Arts and Sciences. I brought along my dog-eared copy of the ‘Owner’s Manual,’ where he had chronicled his witty and wise insights about the inner workings of universities from his service in the same role. He was generous with his time, counsel, and good humor, and I continue to cherish both the memory and the wisdom he shared with me.”

Born in the Free City of Danzig in 1927, Rosovsky and his family came to America in 1940 to escape the Nazis, who had overrun Poland the year before. Theirs was an arduous trek that led first to Belgium and then through France, Spain, Portugal, and finally to Hoboken, New Jersey, and New York. Rosovsky would return to Europe in 1945 as a member of the U.S. Army’s Counterintelligence Corps and attend the Nuremberg Trials.

He completed his undergraduate degree in 1949 at the College of William and Mary on the G.I. Bill and returned to the Army, serving in the Korean War. That deployment led to his feet freezing during the retreat from the Yalu, and he was awarded a Purple Heart. More important to his future career, it also led to a year in Japan, during which he monitored Russian broadcasting.

That experience bolstered his long-term interest in Japan’s rapid modernization and opening to the West after the Meiji Restoration of the late 19th and early 20th centuries, and served as the basis for his dissertation. He would receive his doctorate in 1959 and use his dissertation as the basis of his first book, “Capital Formation in Japan, 1868–1940,” in 1961. By that point, he had already joined the faculty of the University of California at Berkeley, where he taught economics and history, as well as Japanese and Korean studies.

The broad scope of his intellectual range and curiosity would come into play when he returned to Harvard in 1965. A professor of economics, in 1968 he chaired the Faculty Committee on African and Afro-American Studies, which then issued its so-called Rosovsky Report, calling for “the creation of a standing Faculty Committee on degrees in Afro-American Studies.” Heeding the call from students of color, this committee was tasked with developing and supervising “a combined major in this field and to grant degrees starting with the class of 1972,” which laid the groundwork for the multidisciplinary Department of AAAS. In 1969, Rosovsky started his term as chair of Economics. He became dean of the FAS four years later.

It was in this capacity that Rosovsky drove the creation of Harvard’s Core Curriculum. This broad-based program rooted Harvard undergraduate education in a shared program of arts, science, and social science that he hoped would “give all students a better sense of intellectual sympathy for one another” and set standards for what “an educated person” should know. Rosovsky’s commitment to curricular reform at Harvard led him to turn down the presidencies of both Yale and the University of Chicago. Along the way, he also managed to eliminate Harvard’s budget deficit.

After stepping down as dean in 1984, he joined the then-seven-member Harvard Corporation. He served as acting president of the University in 1984 and in 1987, when President Derek Bok took a brief sabbatical. He returned briefly again as FAS dean in 1990.

“For me, Henry Rosovsky was an enormous inspiration,” said former Harvard President Lawrence H. Summers. “As much as anyone I have seen, Henry understood and acted on the idea that Harvard had to stand for excellence and also be a warm community. I will miss his wit and his wisdom.”

Married to Nitza Rosovsky, an author and former Harvard Semitic Museum curator for 66 years, the longtime Cambridge resident was deeply committed to family. Together, they had three children, Leah, Judith, and Michael, as well as numerous grandchildren. In 2020, Leah Rosovsky was appointed as Stanford Calderwood Director of the Boston Athenaeum.

“My father’s loyalty to Harvard and his devotion to scholarship were palpable in our household,” recalled Michael Rosovsky. “My sisters and I learned early on that even in a dinner table argument, you better be ready to quote your sources.  We will miss his guidance, good humor, and love.”

This commitment to family extended to Jewish life at Harvard and beyond. Honoring his stalwart support of Harvard-Radcliffe Hillel, Rosovsky Hall was dedicated in 1994. Incorporating a library, office, meeting space, and a kosher kitchen, the building, designed by renowned architect Moshe Safdie, was praised as a welcoming space by its namesake, on the occasion of his 90th birthday and the hall’s 25th anniversary. “Hillel serves many other people,” said Rosovsky in his remarks. “Today a lot of Muslims eat in the dining hall. The entire University benefits from the programs that take place.”

Rosovsky’s contributions were remembered fondly by Economics Chair Ed Glaeser. “Henry was an important member of our community for almost seven decades,” he said. “His pioneering role connecting our department with East Asia was continued by Dwight Perkins and has only become more important over time.  His remarkable ability to forge consensus from discord and his commitment to core academic values remain inspirational.”