In praise of Henry Rosovsky at 90 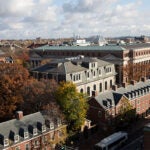 The celebrated wit and humility of Henry Rosovsky, the Geyser University Professor Emeritus at Harvard, was on full display Wednesday evening. After a dinner in his honor at the Charles Hotel, including many words of praise for his service to Harvard and commitment to its Jewish community, Rosovsky took the podium and said, “Ladies and gentlemen, I am very tempted to believe a quarter of what you’ve just said.”

Attended by Harvard President Drew Faust and her predecessors Derek Bok and Neil L. Rudenstine (along with a video of well wishes from Lawrence Summers), the event celebrated Rosovsky’s 90th birthday and the 25th anniversary of the building named for him, Harvard Hillel’s current home, Rosovsky Hall.

But the night also celebrated a concern close to Rosovsky’s heart, the future of Jewish life at Harvard.

Over dinner, Bradley Bloom of the Hillel Board of Directors announced the launch of a fund drive targeted at $25 million. This, he said, will be devoted to maintain Rosovsky Hall and “to endow the programs and the individuals that lead our organization.”

Born in the Free City of Danzig , a self-governing port on the Baltic Sea that is now known as Gdańsk, Rosovsky immigrated to America. He earned his doctorate at Harvard and became an economic historian specializing in East Asia. As a longtime administrator, he was dean of Harvard’s Faculty of Arts and Sciences from 1973–1991, and acting president of the University in 1984 and 1987.

During a cocktail reception at the hotel’s Regattabar Thursday evening, Faust delivered the first toast.

“We are celebrating the birthday of a towering figure,” she said. “This will not be new to many of you, but the sheer scope of his roles bears repeating. He was a student at the School of Arts and Sciences in 1949, then an alumnus, then an alumnus again when he was awarded an honorary doctorate of law in 1998. He’s been a faculty member in the economics department, the dean of the Faculty of Arts and Sciences, and twice the acting president of the University.

“It’s hard to imagine a vantage point from which Henry hasn’t seen and improved the institution we love so much.”

Citing Rosovsky’s 1990 book “The University: An Owner’s Manual,” Faust said. “I turn to that book often for sage advice and for commiseration. Henry is famous for having coined the expression that the students are here for four years, the faculty is here for a lifetime, and Harvard is here forever. We look forward to many more years of his wisdom, wisecracks, and acuity. And we know that his influence on this institution is everlasting.”

Also noted were his marriage to author Nitza Rosovsky, who sat beside him at the dinner, and his status as one of the first Jewish scholars and immigrants to ascend to a high level at the University. “Even in the 1970s that was still unthinkable,” Bloom said. “Here was a leader who proved that you could be loyal to your heritage and still be 100 percent Harvard.” Citing the current political climate, he said, “That is a little reminder that sometimes those immigrants work out pretty well.”

Rosovsky’s influence was lauded in Summers’ video tribute. “Thirty-five years ago, I sat in your office as a young recruit to the Harvard faculty, and I was trembling with the majesty of it all,” he said. “Over time I became less intimidated and came to value your wisdom and your experience. I found myself consulting your book frequently during my years as president. There was no one more committed to decency and to what was right. On behalf of all of us in the Harvard community, we look forward to many more years of your wise advice.”

During his own remarks, Rosovsky recalled the founding of Harvard Hillel under Rabbi Ben-Zion Gold, and its move from its original Bryant Street home to Rosovsky Hall. “Rabbi Gold’s real ambition was to move Hillel to the center of the University. He used to talk about that a great deal. And I used to tell him, ‘Why don’t you leave well enough alone? You’re on Bryant Street near the Divinity School, be happy.’ He was so right and I was so wrong.”

Rosovsky also credited the vision of renowned designer Moshe Safdie, who was present at the dinner, for making the hall a welcoming space. “Hillel serves many other people. Today a lot of Muslims eat in the dining hall. The entire University benefits from the programs that take place.”

On a personal note, Rosovsky made light of his accomplishment in turning 90. “There is no particular virtue in that,” he said. “All it takes are good genes and a good doctor, and I’m glad to say that I have both.”