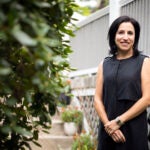 How food donations can help fight hunger and climate change

Lauren Zabierek, M.C./M.P.A. ’19, executive director of the Cyber Project at the Kennedy School’s Belfer Center, served as an Air Force intelligence officer from 2003 to 2008. After her military career, Zabierek became an analyst with the National Geospatial-Intelligence Agency. Assigned to the agency’s Office of Counterterrorism, she completed three deployments to Afghanistan following the death of her brother, Sgt. Andrew C. Nicol, who was killed in Kandahar in 2010. “I wanted to pick up that mantle and really fight for him,” she said. We asked her to reflect on her service — and that of her brother — amid the humanitarian chaos unleashed by the Taliban’s takeover of the country in the wake of the U.S. withdrawal. The interview was edited for clarity and length.

GAZETTE: As someone who served in Afghanistan, what’s your reaction to the events of the past week?

ZABIEREK: For me it’s very difficult to watch, very difficult to process. Together with my friends who served as civilians, we’ve been just trying to support each other and process together what’s happening. We spent so much time and effort there. In my group of friends, most people volunteered to go multiple times because they were so dedicated to the mission — upwards of eight, nine, 10 times. I deployed three times to Afghanistan, but I also lost my brother there. And so, what has been happening is especially hard to take. I don’t want to make it all about his sacrifice or mention the U.S. and coalition military and civilian deaths without acknowledging the 100,000 Afghan civilians and military and police who have also given their lives, in addition to the ones who served bravely alongside us. And so just watching this humanitarian tragedy unfold has been really hard to process. We’re all sort of in shock. We’re just really dismayed and fearful for Afghans and the people still waiting to be evacuated.

GAZETTE: What is your message to the families and friends of the thousands of fallen service members and civilians from the U.S. and Afghanistan, and to the thousands of people who have devoted years of their lives to the conflict?

ZABIEREK: I’m worried that my words aren’t enough. Saying “I’m sorry” or “We tried” to the Afghans — that’s just not enough. We need to help them now. To the families, here’s what is in my heart: Your loved one is or was somebody who chose to run toward the fight, to help, to make a difference. What that fight means in the broader context, I am not sure, I am struggling with that myself. But a series of policy decisions over the last decade does not change that very admirable and important quality. For those who spent so much of their lives dedicated to the mission, I think we did what we could, we did what we’re supposed to, and I think we need to take some solace in that. We were compelled to serve; we were defined by those few moments on September 11. And so, we can take pride in that service, again as people who run toward the fight and want to help in some way. That quality, and the experiences we gained from doing so, are things that we can be proud of and carry with us, because the problems we’ll face in the future will only get harder.

GAZETTE: Can you tell me more about your brother?

ZABIEREK: He was an Army Ranger with the Third Battalion 75th Ranger Regiment. He was on his fifth deployment, and he was killed in Kandahar by an IED. He was 23. It was just over 11 years ago, which is really hard to believe. He was young and filled with a desire to help and to serve. And as a big sister, I guess I felt like I had to go and fight for him. And so, I did.

GAZETTE: Can you talk a little more about your own service?

ZABIEREK: I was in Air Force ROTC when 9/11 happened, and that’s when I decided that I wanted to be an intelligence officer. And so, I commissioned in 2003, but then got out of the military in 2008. By that time, my brother was in the service, and that’s when I went back into the government as a civilian intelligence analyst. It was after he was killed that I did all my deploying to Afghanistan, because I wanted to be part of that mission more so than I had been. I wanted to pick up that mantle and really fight for him. But then it becomes more than that, and you realize part of you stays there. It truly is just a beautiful, haunting country. I wasn’t working too directly with the Afghan people, but those few I came into contact with during my work were truly good people who just wanted things to be better in their country.

GAZETTE: We’ve been seeing a humanitarian crisis unfold as thousands of Afghans who were central to the U.S. efforts are now trying to flee the Taliban. What are your thoughts on how the U.S. and other countries can support allies who are still on the ground in the coming days, weeks, and months?

ZABIEREK: First, there needs to be security on the ground. You see these people at the Kabul airport, and that doesn’t seem to be very secure yet, so we need more forces there to protect them. We need to get them out. I’ve seen some in Congress trying to use their platforms, like Congressman Andy Kim, to coordinate assistance. As you can imagine, it’s very frenzied and a lot of people are trying to help, and I hope we can coordinate efforts. At the very least, you can make your voice known by calling your representative and urging them to push these emergency visas to help people get out of the country.

GAZETTE: How would you respond to people who think the past 20 years were a total loss?

ZABIEREK: I’m trying to think through that myself. It’s easy to become cynical and despondent. Trust me, I’ve been there. I think we did some good things. We did some not-so-good things, as well. But no, I don’t think it’s a total loss. I know that the people who went always had a sense of wanting to help in some way. Schools, roads, and hospitals were built, infrastructure was created, hope was sparked. We defeated al-Qaeda in Afghanistan. We got Osama Bin Laden and Mullah Akhtar Mansour. Like I said, I’m still struggling with that question. I think we did as much as we could at the tactical level and at the human level. That’s both for the military and the civilians who went. I don’t think the civilians get enough credit in this story; so many went on their own accord as volunteers.

But we are at an inflection point. We can’t keep doing this sort of thing. We need better strategy when getting into and out of conflict; better policy execution. We need to put humans at the center of everything we do, here and abroad. My generation has seen a lot in our short lifetimes, and I think, as a result of everything we’ve learned over the last 20 years, we’re better positioned to be at the decision-making tables and incorporate diverse voices so that we can understand better the threats we’re facing and have better outcomes.

What does the Taliban takeover mean for Afghanistan and the region? The Belfer Center for Science and International Affairs asked its experts. Here is what they had to say.