A personal revelation put Nelson LaMarche on the right path 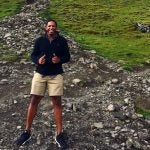 Nelson LaMarche arrived at immunology in an unexpected way. Growing up in New Jersey, he said, he idolized his Dominican physician father and wanted to become a doctor.

So, LaMarche, who received his Ph.D. from Harvard Graduate School of Arts and Sciences in November 2020, attended an honors high school with a specialized premed curriculum, where he studied anatomy and physiology, did rotations with clinicians, and became an EMT, which he continued to work at throughout college.

“If you had met me in college, you would not have thought there was anyone more gung ho about going into medicine than me,” said LaMarche. “But it turns out that I’m a huge germophobe.”

Luckily, LaMarche said, he found an opportunity to do biomedical research while he was an undergrad at Cornell University.

LaMarche was part of an undergraduate biology program at Cornell aimed at mentoring students in groups underrepresented in science and medicine. One of the program requirements was to do a semester of research.

But LaMarche was so focused on becoming a doctor that he had to be convinced to participate in the research program. If nothing else, his advisers said, it would reflect well on his medical school application. He quickly discovered how right research was for him.

“I did it for a summer, I did it for a semester. I never stopped because I loved it so much,” he said, and added that “in some ways, they tricked me, but it was the happiest trick that’s ever been played on me.”

Serendipity also played a role in directing him toward the study of immunology.

When he had to do a presentation for the Biology Scholars Program on a faculty member’s research LaMarche said, “I could have easily been drawn to developmental biology … or neuroscience.”

But he chose to work with a researcher who studied asthma because both he and his sister have asthma, he said, recalling a childhood where a nebulizer was always at hand.

“If you had met me in college, you would not have thought there was anyone more gung ho about going into medicine than me.”
— Nelson LaMarche, Ph.D. '21

Initially, he thought asthma was a disease of the lungs, but was surprised to find that it is driven by immune system dysfunction. He was intrigued.

“It made me realize that the immune system plays a role in every single disease,” he said. “You literally cannot name one single disease that does not have an immune component.”

Once he arrived at Harvard Medical School (HMS), LaMarche’s research shifted to immunometabolism and obesity. He said it might be surprising for some to learn that obesity is not simply an energy storage disease, but also a disease of the immune system.

This cellular dysfunction is what leads to metabolic diseases, such as cardiovascular disease, stroke, and diabetes, he said. LaMarche has studied how the different types of immune cells interact with each other in the lean state, and how the cells change in obesity.

Because he initially wanted to become a doctor, LaMarche said he is very interested in the translation of basic science research to patient care.

At HMS, he participated in the Leder Human Biology and Translational Medicine Program, a Division of Medical Sciences program that offers additional classes in biology, metabolism, drug development, and clinical trials for those interested in translational science, with the lessons on metabolism being the most fruitful for his research.

He credits the mentorship he received at HMS from Michael Brenner, the Elizabeth Fay Brigham Professor of Medicine, and Lydia Lynch, HMS lecturer of medicine, part time, both at Brigham and Women’s Hospital, with giving him the confidence to pursue his future career interests. He hopes that the work being done in the Brenner and Lynch labs will eventually lead to therapeutics that will block inflammatory pathways and lead to treatments for obesity and related metabolic disorders.

Looking back, LaMarche said, the first research grant he wrote as an immunology graduate student was well-received, and he was awarded the funding. So it came as a shock to him that the second, similar, though more competitive, grant he wrote was roundly criticized.

But Brenner helped change his perspective of the grant process, impressing on LaMarche that the grant reviewers were on his side and actually wanted to improve his research project.

Brenner told him that it’s so much easier if you go into every interaction in science initially believing that the person wants to help you. Even if they’re being critical of your work, you have to think, deep down, this person is an academic. They want to make your work better.

LaMarche took the advice to heart.

“We rewrote the grant, incorporating their suggestions into our research, and we ended up getting it,” he said.

He then applied Brenner’s words beyond the lab, to his personal life.

“It makes life so much easier, so much less stressful, if you go into interactions assuming that someone wants to help you,” he said. “And, just a happier person in general.”

Lynch was another influential mentor. During his time at HMS, LaMarche said, it was exciting to see her develop from a postdoc to a leader in the new field of immunometabolism.

He said he learned a great deal by comparing the goals and concerns of a young investigator against those of a more established senior PI like Brenner.

“It really showed me the stress never ends, and the excitement never ends in science,” said LaMarche. You’re just stressed and excited about different things.”

His mentors, he said, kept up their excitement for the work, even when results were not always successful.

“They always made it seem like everything was going to be OK, and all we had to do was focus on the science.”

That encouragement gave him a sense of resilience, enabling him to apply for a postdoctoral fellowship in cancer immunology at the Icahn School of Medicine at Mt. Sinai.

LaMarche had just submitted his thesis in spring 2020, when the HMS campus reduced operations due to the coronavirus pandemic. Although restricted lab access presented some problems, overcoming the obstacles during the dissertation review process went relatively smoothly, he said. LaMarche defended his dissertation during the summer, and by November he was making a toast, socially distanced on Lynch’s porch, before moving to New York City.

His new research field, he said, offers him the opportunity to do research in an area with potential for immediate impact on patients while providing him with the opportunity to continue studying immunometabolism, applying what he’s learned about how immune cells react and interact in the tumor microenvironment.

The switch to studying cancer is a big change, he said, but “Harvard gave me the intellectual abilities to transfer to a different field, and it also gave me the confidence to not be fazed by transitioning into a new field.”

From mentee to mentor

Toward the end of his degree program, LaMarche became a mentor to younger grad students.

“Finally, I’m not the person who’s the newest [in the lab] anymore, and I get to mentor someone.”

He had participated in Division of Medical Sciences recruitment events at HMS before COVID-19, serving on panels and giving lab tours to prospective students as a way to give back and share his enthusiasm for scientific research.

Now, as he takes his first professional steps in developing his academic research career, LaMarche is eager to continue mentoring younger scientists. Harvard instilled in him the duty to pass on the lessons he’s learned, he said. He hopes to be able to do so throughout his career.