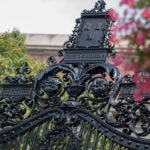 Does vandalism have a place in public protest? Can one be a fan of a book but disagree with the author’s personal views? Should Civil War reenactments be regulated by the government?

For the members of the Harvard Undergraduate Ethics Bowl, a new student club devoted to analyzing and debating ethical issues, going deep on big questions is about more than winning an argument.

“Ethics Bowl is a really unique opportunity to reflect on your personal value system. It’s not just about arguing an arbitrary side of a debate,” said Jillian Sharples ’21, founder and president of the group. “You actually have to decide: What do I think? Should I believe this? And how can I justify this?”

Unlike traditional college debates, where speed and the ability to argue both sides of an issue are advantages, Ethics Bowl competitions involve a back-and-forth between teams and with their judges, where each can ask questions and respond. It’s a slower, more measured process that rewards collaboration and civility. The Association for Practical and Professional Ethics (APPE), which administers the annual Intercollegiate Ethics Bowl (IEB), rates competitors on “intelligibility, focus on ethically relevant considerations, avoidance of ethical irrelevance, and deliberative thoughtfulness.”

When Sharples, a social studies concentrator from Berwyn, Penn., founded Harvard’s chapter of Ethics Bowl last spring, she had been looking for three years for a community space where people from all backgrounds could come together to discuss issues without the argumentative foundations of traditional debate. Sharples had competed in Ethics Bowl in high school, and decided to form a group on campus.

“The types of discourses that students primarily engage in are more aligned with the argumentative methods rather than collaborative discussions,” she said. “[Ethics] helped me develop an intellectual humility and understanding of the validity of other people’s perspectives. I think it’s really important to be able to [acknowledge] that we think differently, but I’m willing to respect you, and I’m willing to try to understand your point of view.”

Sharples knew it wouldn’t be easy to recruit new members and train them for high-level competition during a regular year, but she certainly didn’t expect Ethics Bowl’s first full year as a club to overlap with a pandemic and all-remote fall semester. Despite the upheaval and uncertainty, 12 members have joined from Massachusetts, Texas, and New Zealand, and seven will participate in their first official competition next month, the IEB regionals, where they will compete on 15 cases.

In the process, said Sharples, the competitive ethicists are building a community based on a shared commitment to understanding and learning from one another.

“With the unpredictable nature of this semester, we’re encountering a lot of the issues that other student organizations are encountering” around community-building, said Sharples, who shared a house with friends in Falmouth, Mass., this semester. “I am really proud of everybody on our team, because we’re doing a good job despite the circumstances.”

“In Zoom classes, or even in other clubs, there isn’t a ton of interaction with other students. Ethics Bowl has been a great way to really connect with my peers,” said Katie Sierra ’23, an integrative and evolutionary biology concentrator and incoming president of the group. “We don’t just discuss ethics cases; we have socials and it’s a great community. It’s also not an exclusive group with a [difficult] comp process [of club tryout or audition]. Because we’re relatively new, we are open to ideas and bringing new things to the table.”

To prepare for competition, the team breaks up into groups of three or four members to focus on a specific case. Each group creates a structured template to lay out facts, priorities, and blind spots relevant to each question. Then, they work through all permutations of a problem and all possible challenges to their ethical framework.

The APPE Intercollegiate Ethics Bowl matches are all remote in 2020-21, which allowed for other digital opportunities. In a normal year, the Harvard team might hone their skills through scrimmages with other local teams. With everyone practicing remotely, Sharples organized scrimmages with West Point and Stanford, exposing both teams to opponents they may not have met under normal circumstances. The teams are judged on strength of argument, clarity, thoughtfulness, and relevance.

Motivating others to live in accordance with their ethics is a well-traveled path for Sharples, who entered Harvard as a Reserve Officers’ Training Corps (ROTC) cadet. Last spring, she led 80 cadets as cadet command sergeant major at the Paul Revere Battalion (housed at MIT), tracking accountability and maintaining physical fitness standards and esprit de corps among the group. This semester she is working on staff at the battalion before assuming the role of operations officer in the spring.

During the pandemic, Sharples has kept up with her ROTC commitments, taking required military science courses online at MIT and participating in virtual physical training workouts with fellow cadets at Harvard and other colleges in the Boston area. It’s another area of her life where community and collaboration are vital to her success.

Her experiences as a cadet were also foundational to developing her social studies focus area, “Women at War: Fighting for Citizenship,” and her senior thesis topic, a theoretical relationship between military service and citizenship. Studying the military through the lens of history, philosophy, and economics “allowed me to have a different lens on the world at large and see the broader systems in place” in such institutions, she said.

“ROTC aligned with my personal values of protecting my country and believing what it stands for, and over time, it’s become more about the people that I’ve met within ROTC and in the military at large,” she said. “I want to be there for them, and I’m inspired by [their] dedication. That keeps me motivated.”

The Ethics Bowl was co-founded by Natalie Sherman Jollis ’21 and Stephanie Yao ’22.

“Natalie and Stephanie were both critical in navigating the administrative aspect of establishing the Ethics Bowl, along with recruiting and training the initial members of the organization,”  said Sharples. “Their visions and work set the foundation for what ethics bowl is today.”