History in a snap … or two 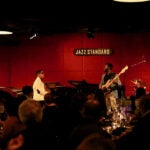 In the name of justice

In the fall of 1932, Philadelphia-based photographer William Rittase (1894-1968) visited Harvard’s campus. It was during the tenure of President A. Lawrence Lowell, who sought to document its impressive buildings both old and (at the time) new.

Rittase captured more than 87 black-and-white photos of the campus, which are now held in the Harvard University Archives. Nine of his photos were recreated this fall by Harvard staff photographer Stephanie Mitchell.

Some of the most striking changes overall, Mitchell said, were the changes in vegetation. Trees that were saplings 90 years ago are fully grown, and other trees have either fallen or been plucked from the landscape long ago; the iconic ivy has been removed from several buildings. Another major visual difference, Mitchell noted is the more “cluttered” modern campus — with fencing, posts to block vehicles, parking signs and meters — compared to the clean simplicity of the 1930s.

And, of course, Mitchell’s photos are in color, which showcase the campus in a different light than Rittase’s black-and-white images.

Ross Mulcare and the staff of the Harvard University Archives contributed to the photo captions for this piece.

Compare the images by moving the slider (click or swipe).

Nearly a third of the photos Rittase shot at Harvard, including this one, were of the newly constructed church, which commemorated Harvard graduates who died during World War I. It was dedicated on Armistice Day in 1932, the same year Rittase took this photo.

The exterior, with its bell tower and steeple (the highest point in Harvard Yard), is the same today, but the interior has been modified several times since then. Memorials have been added to recognize other members of the Harvard community who lost their lives in war, including the three women of Radcliffe College who died during World War I.

The museum was originally housed in Hunt Hall but found a new home in 1927, in this Georgian Revival building. The new museum building was one of several now-iconic campus buildings erected during Lowell’s tenure and photographed by Rittase. Others included Memorial Church, Adolphus Busch Hall, and several student dormitories.

Rittase took this photo from across Quincy Street, standing in the gate of Sever Quadrangle. Today, the same view is marred slightly by the addition of a pole blocking vehicles from driving through the gate. It’s a subtle yet significant difference, like the formal clothing on the figure in Rittase’s photo next to the jeans on the figure in Mitchell’s recreation.

Designed by renowned architect Charles Bulfinch, University Hall was constructed between 1813 and 1815 of white granite. Today it actually looks more like the building originally did than the ivy-covered hall of 1932 — the ivy didn’t show up on campus buildings until the late 1880s. Harvard began removing ivy from its buildings in the mid-1900s because its tendrils were damaging the walls and costing thousands of dollars annually in maintenance.

The bronze John Harvard Statue seen in both photos was sculpted by Daniel Chester French in 1884 and was originally located outside Memorial Hall. When Rittase visited Harvard, the statue had been in its new location for eight years. Though the old photo doesn’t show the color of the statue, it’s safe to say the toe of its left shoe was not nearly as worn as it is today — the second photo shows it is now much lighter than the rest of the statue, due to tourists rubbing the bronze shoe for decades.

Since it was opened, University Hall has at various points housed a dining room, a library, a chapel, classrooms, and meeting rooms. In 1969, the building was even the site of a Vietnam War protest, when students occupied the hall to protest the war and Harvard’s connections to it. The following year, University Hall was designated a National Historic Landmark.

When Rittase visited campus, Widener had been open for almost 20 years. The story of its construction in 1914 features both well-known figures — the library’s namesake, Harvard Class of 1907 alum Harry Elkins Widener, famously died in the sinking of the Titanic — and those less known until recently, like its African American architect Julian Abele.

The front edifice of Widener has remained largely unchanged since Rittase photographed it, except the removal of the ivy seen in his photo. Ivy or no, the flagship library is one of the most iconic buildings on campus today.

Home to the Harvard Lampoon humor magazine, this quirky building was designed by Harvard alum and Lampoon co-founder Edmund M. Wheelwright in the style of a Flemish castle.

Its design has drawn much criticism over the years, most notably from former Cambridge Mayor Alfred Vellucci, who described it as “one of the ugliest buildings in the world.” Despite — or perhaps because of — its controversy, the building was added to the National Register of Historic Places in 1978.

The “castle” has changed in small ways since 1932; its roof tiles have been replaced and its door painted in a slightly different design. Its location outside of Harvard Yard, though, shows how far apart in time these two photos were taken. An early model sedan has been replaced by a modern Mini Cooper, parked at a meter that wasn’t even conceptualized in 1932, let alone compatible with a smartphone app.

The Weld Boathouse on the Charles River was built in 1906 to serve the needs of Harvard’s rowers, with funds donated by Harvard alumnus and Boston Athletic Association co-founder George Walker Weld. When this photo was taken in 1932, and for many years after, the boathouse was used by Harvard Men’s Freshman Crew.

Today, the building houses the Radcliffe Women’s Crew, the House Crews, and recreational facilities. The ladder and life preserver on the bank next to the boathouse have been replaced by a row of bushes, and the buildings seen in the background of Rittase’s photo are now partially or fully obscured by trees.

Since it opened its doors in 1878, Memorial Hall has been one of Harvard’s most recognizable landmarks. The funds for the building were raised following the Civil War by a group of Harvard alumni seeking to create a memorial to Harvard graduates who had fought for the Union cause. The building was designed by Harvard alumni William Robert Ware and Henry Van Brunt. Fellow alum Oliver Wendell Holmes composed a hymn for the laying of the building cornerstone in 1870.

Mitchell’s photo of a “clockless” Memorial Hall tower looks more like the tower’s original design than does Rittase’s photo. The clock was added in 1897, 20 years after the building was finished. It remained until the 1950s, when the whole tower was damaged by a fire. When it was restored in 1996, historic preservationists supported the architectural team of Childs Bertman Tseckares in a design reflecting the “clockless” tower of 1878.

Rittase shot his photo from behind the Class of 1887 and 1888 Gates, Harvard Yard’s only double gate.

The Harvard Hall photographed by Rittase — and still standing today — was built in 1766, two years after the original Harvard Hall burned down.

Harvard Hall today is newly renovated with many changes to the building’s interior, including making it fully handicapped accessible. Renovations to the exterior may not be obvious from afar, but they include restoration of the historic masonry façade, repair of the exterior clock, and restoration of the wooden cupola seen here.

In 1932, the Cambridge bank of the Charles River featured a dirt walking path surrounded by neatly cut grass. With no large trees or bushes in the photo, campus buildings and private homes are visible in the background.

The familiar Weeks Footbridge can be seen in Mitchell’s recreation as it is in Rittase’s photo, along with the tops of the same campus buildings. Otherwise, though, this is one of the most transformed landscapes at Harvard. The riverbank is overrun with vegetation, and large trees block the other side of the road from view. The road itself — renamed Memorial Drive a decade before Rittase’s visit — is much wider than in the 1930s, to accommodate two-way traffic with four lanes. 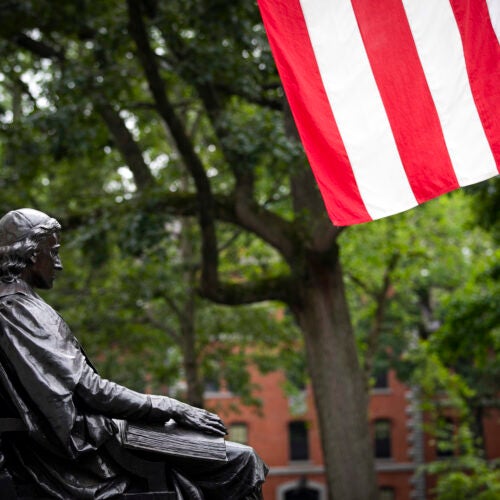 Harvard, in the background

Missing campus? Zoom can include images of favorite views. Here are some of ours ... 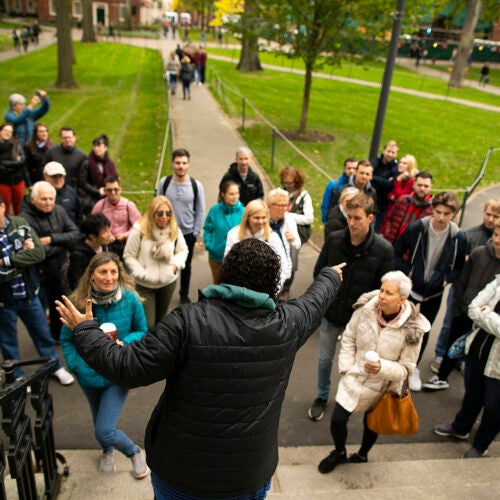 Tagging along on a student-led historical tour 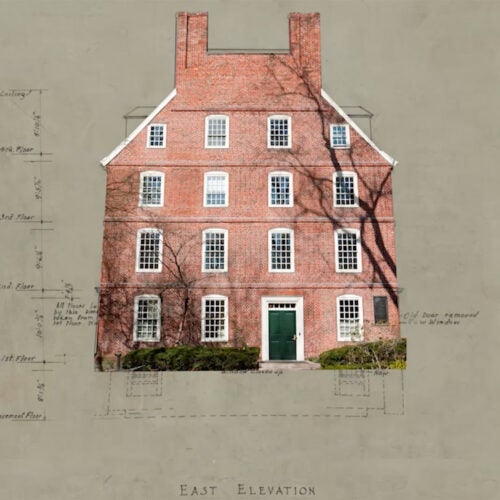