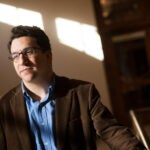 It’s been a dormitory, an army barracks, a lecture hall, an observatory, administrative offices. With a birthday in 1720, it’s older than the United States.

In its almost 300 years, Massachusetts Hall, the oldest surviving Harvard building, has stood as silent witness to the continuous metamorphosis of the campus and community surrounding it. From housing the Continental Army during the Revolution in 1775‒76 to surviving a devastating fire in 1924, the building’s resilience is largely due to meticulous preservation and maintenance spanning centuries.

Long-anticipated renovations will begin this summer and continue that tradition, preserving the building’s legacy while also bringing it into the 21st century. Significant updates include achieving compliance with the Americans with Disabilities Act by installing an elevator and renovating bathrooms; improving the building’s energy efficiency by adding insulation to the roof and recaulking the window panes; repairing the exterior clock; and upgrading information technology infrastructure, among other changes.

“The upkeep of a building like Massachusetts Hall requires significant attention to historical preservation in addition to the typical maintenance work,” said Harvard Executive Vice President Katie Lapp. “These long-overdue renovations will also ensure that the building is contributing to University goals to reduce on-campus greenhouse gas emissions, while making it as accessible as possible to all members of the community.”

The building will be unoccupied over the summer while renovations take place, reopening just before the 2018‒19 school year begins.

While the exterior of the 98-foot-long brick structure has largely remained the same over time, the interior has been modified to reflect changing needs and uses.

The original blueprint from 1718

Massachusetts Hall was designed and built between 1718 and 1720 by Harvard President John Leverett with input from his successor, Benjamin Wadsworth. The original blueprint for it is a spare, meticulous pen-and-ink drawing. Doors, windows, hallways, and chimneys are clearly labeled and measured, while small stars indicate studies, tiny 5-feet-by-4½-feet enclosed spaces in each room that were used to store coal in the 1800s. The building was erected with funds from the commonwealth of Massachusetts — £3,500, or approximately $570,000 today.

Among the earliest exterior representations of the hall are a painting by William Burgis (1726) and an engraving by Paul Revere (1767). While the building in those images remains fairly constant, the world around it has drastically changed in the intervening decades. For instance, Harvard Hall burned to the ground and was reconstructed, buildings were added to the campus, and subtle social and political messages were relayed.

“The wall seems to really run right through the middle of the [Revere] image, dividing the Yard between those who have access and those who don’t have access,” said Ethan Lasser, the head of the Division of European and American Art and the Theodore E. Stebbins Jr. Curator of American Art at the Harvard Art Museums. “Outside the walls of the Yard, there’s this world of sociability, commerce, and coupling, while inside the walls you have these kinds of solitary, robed, academic figures. It’s quite a contrast in the way [Revere] set that up — academic life versus the world outside, and what he’s trying to say about who is in and who is out.”

When 640 members of Gen. George Washington’s army took up residence during the Revolutionary War, the damage they caused resulted in some of the earliest recorded renovations to the building, forcing the College to replace doorknobs, broken locks, wood, and glass that the army confiscated or destroyed. In 1778, the commonwealth of Massachusetts reimbursed Harvard £417, approximately $50,000 in today’s adjusted dollars, for repairs to the hall and other campus buildings.

Text from the back of the letter from Harvard College to the commonwealth of Massachusetts:

“Account of the damages done to the Colledges by the Army after April 19th, 1775, which remain to be made good after the first repairs were made previous to the return of the Scholars to Cambridge, after estimate of the subscribers committee appointed for that purpose by the General Court.

In 1977, the hall was officially recognized as a National Historic Landmark by the National Park Service, highlighting it as a location that “possess[ed] exceptional value or quality in illustrating or interpreting the heritage of the United States.” Along with that designation came specific rules about how and when renovations can be done to the building. Sourcing bricks in the cut, color, and size popular in 1720, matching the exact color and consistency of 300-year-old mortar, and re-creating the wooden gutters are among the challenges facing renovation teams.

The Perkins conference room is one of the few spaces in the building retained during 20th-century renovations. Over the past 100 years alone, lecture halls, double-height reading rooms stretching between the first and second floors, and dorm rooms have been converted to other uses.

The exterior of the building hasn’t always fared well either. In 1924, a devastating fire roared through the top two floors, incinerating dorm rooms (and almost destroying original, single copies of three economics students’ freshly submitted theses. The papers were barely rescued in time.) Theories about the fire’s cause flew around campus, from a rogue bird or mouse nest using a match as building material to a discarded, lit match from Matthews Hall carried by the wind.

The original Massachusetts Hall clock, which graced its western wall facing Harvard Square, was mounted in 1725. It came with a bell and a steward, who was responsible for maintaining both, at a salary of £4. Well-represented in visual records of the hall from 1726 forward, the original clock is long gone. Through the intervening years, the space it occupied has been home to many successors, including a broken clock, a fake clock, no clock at all, and a painting of a clock.

This summer, a canvas scrim with a clock face similar to the original has been installed as the actual clock undergoes restoration and maintenance.

This summer’s renovations will restore the most recent version, installed in 1992. Creating and installing a clock that matched the spirit of the original involved at least four types of experts: those who specialized in the clock’s mechanics, an artisan who created and crafted the face, a construction firm that helped with building and placement, and a restoration architect who made sure the clock closely matched the available records.