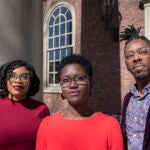 Since May, Black Lives Matter protests have been staged from the West Coast to the East and around the globe, triggered by the killing of George Floyd, who died after a white police officer kneeled against his neck for nearly nine minutes during an arrest. Besides drawing millions of participants, the demonstrations have been notable for the diversity of the activists’ ages, genders, religions, and ethnicities. Among the legions of students who have marched are a number from Harvard who attended events in their hometowns, from Massachusetts and the nation’s capital to Texas and Los Angeles. The Gazette spoke with eight of these students about their experiences.

I felt as if I had to go. This moment is extremely pivotal and a lot of people are listening. Going out and demonstrating in my hometown was a great way to feel empowered and also show support for my community as a Black person in the United States. Being there was more emotional than I had initially expected. Newton’s pretty small and is a predominantly white city, so I wasn’t expecting a lot of people to be there. But there were actually a lot of people there, and it was extremely powerful.

The most impactful moment was when we all did a lie-in in the streets. We stopped traffic, and we went into the street and laid down on the road. I was there with my sister Cierra, who’s also a Harvard student, and my 12-year-old brother. It was the first time my brother had attended a protest. I was right next to him, and we were all lying down on the floor when everyone started chanting: “I can’t breathe.” Seeing my brother in that moment brought out an extremely emotional reaction. I think a lot of Black people and people of color, when we hear of police brutality or anti-Black violence, we often have the shared sentiment of “That could have been someone that I’m close to — it could have been one of my friends or relatives or loved ones.” But I never felt so helpless as I did in that moment seeing my brother lying on the on the street and hearing him shout, “I can’t breathe,” and thinking: That could have been my brother. To me, he’s always been this small little Black boy who has a lisp and is always really cute, but seeing him on the pavement just made me view him differently in a way that I never thought I could have. In that moment, I saw him as a future Black man that I would not be able to protect in a racist country.

All my protest action has been based in the Los Angeles area. I’ve gone out for a lot of different reasons. My dad was incarcerated for the first 13 years of my life. In many respects, I see the work of my life — whether I’m in the classroom working hard or interning at the ACLU and on Capitol Hill — as a protest: a protest of a system that says that I have a one in three chance of going to prison at some point in my life. I attended recent protests because I’m just tired. We’ve been watching Black men die publicly for 400 years now in this country. To continuously see this in 2020, it’s just really disorienting. But I was also there because I care deeply about this country. I feel like this is something that people often miss. When people are in the streets protesting, many are doing so not because they hate America, but because they love America so much, and they believe that America can be better. I’m there because I, too, fundamentally believe that America can be better, and I believe that if it is to be better, it’s on all of us to make it so.

I personally feel like: If not now then when? It’s so important for our voices to be heard. There needs to be change. I felt like it was important to get out there and peacefully protest and have my voice be heard.

So many things come to mind from being at recent protests in the St. Louis area, in Ferguson and in the St. Charles, Missouri, area. I think about a sign I saw that, I think, defines the moment. The sign read, “Masks don’t make it hard to breathe. Being Black does.” It speaks to both the pandemic and racial injustice in terms of police brutality. We’re having to literally fight for our lives in the middle of a pandemic.

Another thing on my mind has been a sense of hope. Now more than ever we’ve had so many allies stand alongside us. Through this dark moment, there’s definitely been some light, and I feel a sense of unity through this. People are finally seeing things for what they really are. People now more than ever are feeling heard or are wanting to know more or wanting to listen. Change is starting to come.

Early in June, I spoke at a protest in my hometown. I told them everybody has a role to play whether that be big or small, and that it’s important that we do something because doing nothing is almost siding with the oppressor and being complicit. I felt very inspired not only because was it well received, but also because people were actually listening. But then part of me also had a sense of disappointment, in a way. I’m a young College student now, and I am feeling the same way that I was when I was in the seventh grade and Trayvon Martin was killed. I was 11 years old then, and I’m 21 years old now. It’s kind of heartbreaking for me to think that almost 10 years of my life or so have, in one way or the other, been shaped by incidents of racism. I’ve known since I was a little kid these incidents happen to young Black men and women and that they could to me.

Growing up in my town, when there was a racial incident or an issue oftentimes people would turn the other way or just pretend it didn’t happen. But it seemed like there were a lot of people coming out and supporting, whether they be white, Black, Asian, or whatever race. It was really good to see a lot of familiar faces, but it was also good to see people who I know have been complicit with racism in the past trying to grow from their previous mistakes.

I’m very proud and inspired of not just seeing young people around the world mobilize but also [people] from different generations connecting with each other. There are people still alive from the Civil Rights Movement who are now passing down the keys. It’s really moving to see how we’re coming together. But all this is for nothing if we don’t keep our foot on the pedal. I’m seeing a lot of news, a lot of corporations, institutions, and governments that are giving out these fake gestures, which is nice and all, but we want real change for people who look like us, not just the check-the-box type of activism. Our ancestors have been waiting for it for years. We want to be the generation that changes that.

Protests sprung up in my local neighborhood and around the White House. I was out there for a couple of weeks, and I was out there during that incident in Lafayette Square that got a lot of media coverage where protesters got cleared out and tear gassed to make space for the president to have his photo op in front of St. John’s Church. I was literally standing in front of the church before the space got cleared. I saw the backup reinforcements marching up to the front line and an officer yelling out “Go, go, go!” It was at that instant that the front line and everyone who was supporting that front line started charging. I got shot in the leg with what I think was a pellet gun or some sort of gas container. Others were screaming that their eyes were burning and on fire because tear gas was everywhere. Luckily, there were a lot of medics around to help protesters. It felt sort of movie-like. It was a frightening sight. It was extremely ironic to think that we call this the land of the free, and when there’s free demonstration against police brutality, it’s in turn met with the very beast that we’re trying to confront.

I’m black and Mexican and have family on both sides who’ve experienced overpolicing in their communities and I’m sick and tired of it so I figured I should go out there and support the community activists in Arlington, Dallas, and Fort Worth who are pushing for change.

I started going to protests the first weekend they broke out in late May. I loved the fact that I saw so many people from so many different backgrounds gathering together and seeing that people genuinely wanted to call attention to this issue and try to remain peaceful. The police were the ones I saw escalate it.

Overall, being at that protest felt very empowering. We were calling out and trying to hold accountable systems that most of us felt shouldn’t even be there in the first place in their current form. We were peacefully protesting in order to be heard. That feeling carried through to the other protests. But, at the same time, it’s very disheartening, especially when you see police line up in riot gear. There are points where I feel kind of hopeless. It feels like they’re not really listening to us. They don’t hear us. That’s the best way I can describe it: a push and pull between perseverance and fear that our voices are not being heard.

I’ve been an avid protester in the DMV area — D.C., Maryland, and Virginia — ever since about 2016 when Trump was elected.

I was out there during the Women’s March, March for Our Lives, during the DACA renewal case. It’s a recurrence for me to show up to protest for social change.

What I can see right now is that our government really has an issue with contrition and being able to acknowledge the issues that are happening right now in our country. Because of that, we have to take it upon ourselves to be able to make change on our own accord and not have to wait for the government to pass legislation. We can cause political and social pressure ourselves. We can’t back down to get piecemeal tokens of change. We really have to keep our eyes on the prize and make sure that we get to the end goal of liberating our communities, particularly Black communities.

Hundreds and hundreds of us went to Watertown Square. We held beautiful signs. Kids stood on parents’ shoulders. Bus drivers honked and stuck their fists out in appreciation and agreement. Days earlier me and a bunch of other kids had drawn with chalk “Black Lives Matter” on the sidewalks and written the names of people who had died at hands of police.

This moment is something we can’t back down from, and can’t pacify or paint over. Battle lines have been drawn and we’ve got to show up. It feels like this is a moment when everyone is reckoning with what this means.

These interviews have been edited for clarity and condensed for length. 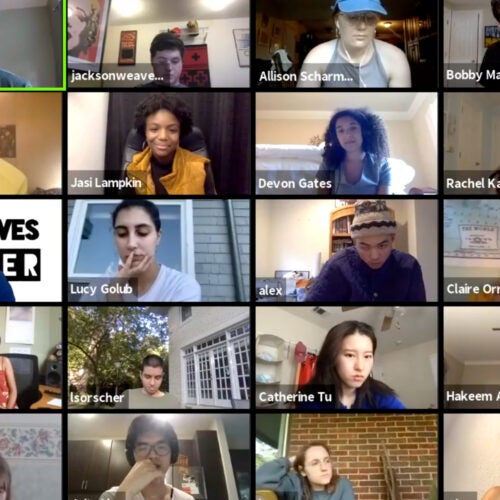